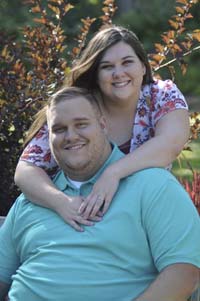 The engagement and upcoming marriage of Elizabeth Rae Konitsney and David Leroy Horn are being announced by the bride-elect’s parents, Michael and MaryAnn Konitsney of Warren and the groom-elect’s parents, Richard and Jane Horn of North Lima.

Miss Konitsney graduated from Lakeview High School in 2013 and attended Youngstown State University. She is employed at Cardinal Health in Twinsburg, as a billing coordinator.

Mr. Horn graduated from South Range High School in 2012. He has a degree in accounting and is pursuing a degree in finance at Kent State University. He is employed at Saber Healthcare in Bedford Heights, as an accountant.

The couple will be united in marriage during a wedding ceremony to be held on May 25, 2019, at St. Mary’s Catholic Church in Warren. Invitations will be issued for the ceremony with a reception to follow at Dilucia’s Banquet Center in Warren.