Warren woman has made rosaries for 40 years 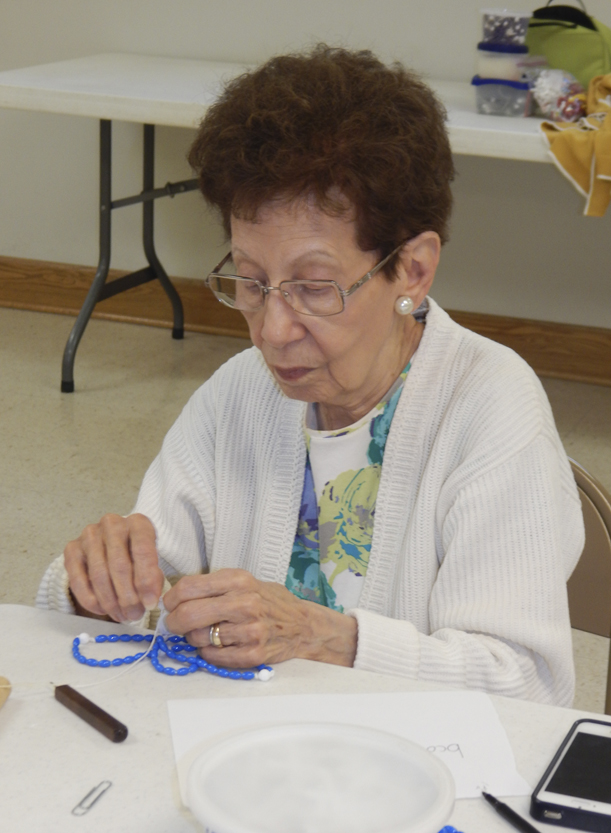 WARREN — For the past 40 years, Warren resident Marie Dippolito has spent time each week at local churches making rosaries that are used around the world.

In the fall of 1979, five women formed a prayer group. They desired to do more than pray the rosary. They wanted to do something of service. Today, the group of women known as the Our Blessed Mothers Rosary Makers gather each Thursday morning at St. Mary Church’s all-purpose room.

Dippolito is the only one of the original five members who has been involved every week.

“When we first met in 1979, we would have a prayer session and then made the rosaries at Vanessa Brocco’s mother Barb Pinney’s home. We were shown how to make the rosaries by Dorothy Kalenich,” Dippolito said.

“I always get the supplies we need for making the rosaries. We make between 150 and 200 each week,” she said.

Rosaries have been made for nursing homes, hospitals, first communicants, foreign missions and service people. Dippolito said the group has made rosaries for people in Nigeria, El Salvador and other countries, with 80,000 made in 40 years. She said the rosaries represent joyful, powerful, glorious and luminous qualities.

“The rosaries reflect on the life of Christ,” she said.

A rosary is a string of beads used for counting component prayers. Prayers are arranged in sets of 10 Hail Marys, called decades. Each decade is preceded by a paternoster and followed by a Gloria Patri. Generally, five decades are recited, with each set recalling one of the mysteries or events in the life of Christ or the Virgin Mary. Other prayers can be added. Rosary beads aid in keeping prayers in the proper sequence.

Dippolito said that when her mother had cancer and had macular degeneration and could not see, the prayer group would pray for her and then spend time making the rosaries.

“We were known as the St. Joseph Rosary Makers and then went back to St. Pius and became the St. Pius X Rosary Makers. We went this year to St. Mary’s because there is more space and are now Our Blessed Mothers Rosary Makers,” Dippolito said.

Original member Vanessa Brocco of Howland has had to take large spans of time off from the group several times.

“I helped for many years from time to time and always felt part of the group even though I was not always there,” she said.

Dippolito said in 1981 and 1982 when the women were making rosaries at St. Joseph Church, they were recorded reciting the rosary by the Rev. Joseph Czaja, which was played on WRRO radio.

“He was very active helping to promote the rosary,” Dippolito said.

She said the biggest project she and others were involved in was in the 1980s when a king-size rosary was made by 60 people and used as a living rosary for the Shrine’s Our Lady of Lebanon celebration in 1981.

“It took may people to hold up the big rosary because we made it from Styrofoam balls,” Dippolito said.

In addition to the regular group of women, the children and family members, including some men, also have helped at times.

Dippolito said she does not know why she does the rosaries each week but enjoys the time with the other women.

“This is something I enjoy doing and spending time with others who also make rosaries,” she said,

Dippolito said the women pray for each other and their families and relatives who are sick. “We always end our rosary-making session with prayers to our Blessed Mother and all the needs of our family, friends, country and especially for all those who will receive the rosary,” Dippolito said.