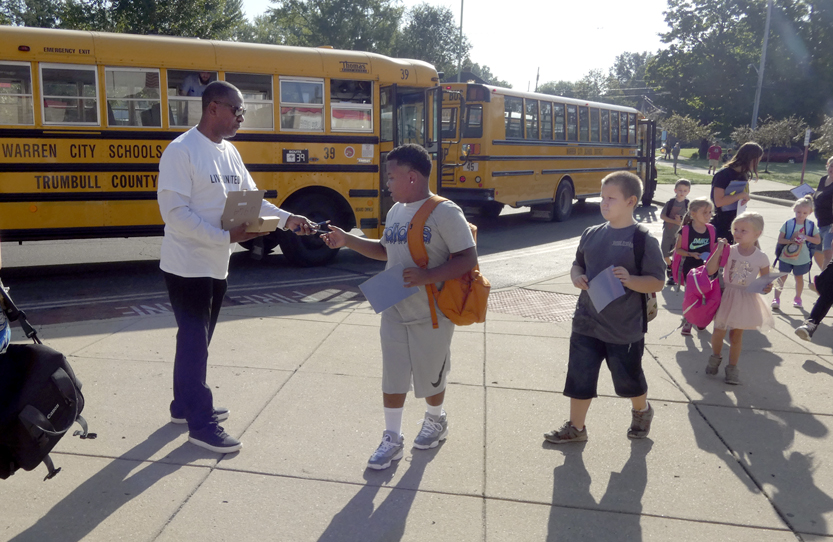 Tribune Chronicle / Raymond L. Smith Warren Mayor Doug Franklin, left, was among the 100 men who passed out pencils to children as they walked into Willard PK-8 School Tuesday morning for their first day of the academic year. The 100 Community Men of Warren initiative is sponsored by the United Way of Trumbull County, Second Baptist Church of Warren and other community organizations. The men stood outside all four Warren PK-8 schools and Warren G. Harding High School.

WARREN — More than 100 men were at the doors of all five Warren City School District buildings Tuesday morning giving approximately 5,000 students new pencils, high-fives and a few hugs as they entered for the first day of the 2019-20 academic year.

The fourth annual 100 Community Men of Warren effort to start out the school year with positive greetings from brothers, fathers and grandfathers was a project co-sponsored by the United Way of Trumbull County.

Warren Councilman Eddie Colbert, D-at Large, was at the doors of Warren G. Harding High School around 7:15 a.m., and at his sons’ school, McGuffey PK-8, later in the morning.

“I’ve participated in this every year,” Colbert said. “Children are our future. We need to show kids we support them and let them know that education is important by showing up to positive events.”

Pastor Todd Johnson of Second Baptist Church of Warren, one of the event’s sponsors, agreed.

“This is a way for our students to know the community cares,” he said.

Ginny Pasha, president of the United Way of Trumbull County, said working to make sure children feel excited about being in school is part of its mission of making families thrive.

“Being at the schools on opening day is a great way to make sure student feel welcome,” Pasha said.

Warren Schools Superintendent Steve Chiaro said the effort was a positive way to begin the year.

“We are grateful for the volunteers who came out this morning to greet our students all across the Warren City School District,” Chiaro said. “Efforts like these align with our emphasis on Social-Emotional Learning by establishing an environment that fosters student success. Setting a positive climate and having a good start to the school day greatly impacts our students and sets a precedent for the remainder of the school year.”