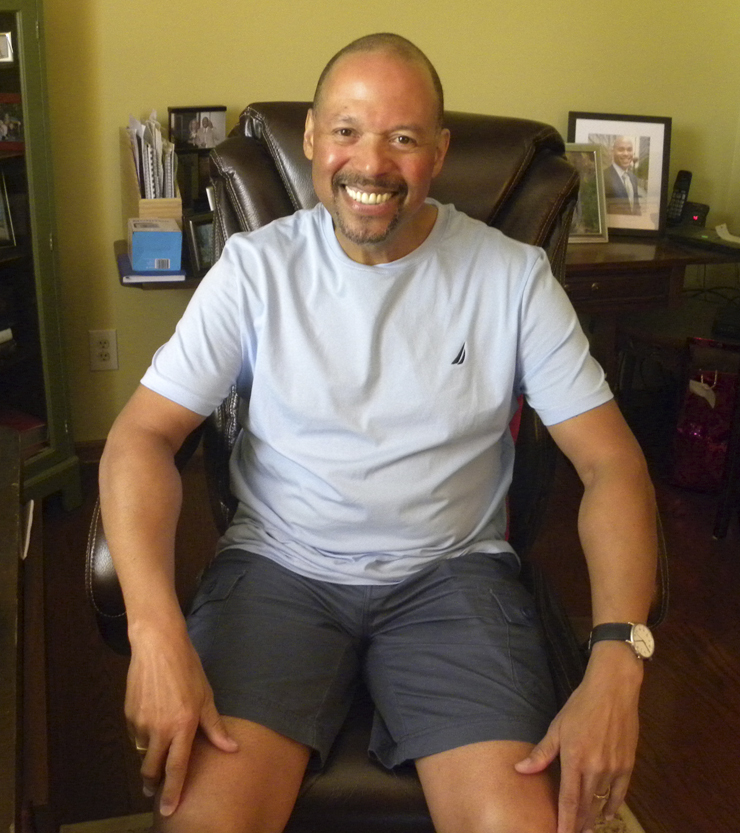 Tribune Chronicle / Marly Kosinski Tim Raimey, 60, of Champion, graduated from Warren Western Reserve High School in 1978. He joined the Army on the delayed-entry program while still a senior and ended up serving for 23 years, attaining the rank of major before retiring in April 2001.

That’s because Raimey, a 1978 graduate, was most colleges’ dream applicant: straight-A student, member of the National Honor Society, Boys State participant, Key Club member and class vice president. He said he planned to go to college, but while taking a walk one day through downtown Warren, he wandered into the U.S. Army recruiting office.

“The recruitment officer asked me if I wanted to go to Germany. I told him I did. I signed up right then and there for the delayed-entry program. My guidance counselor was furious … but my mind was made up,” Raimey, now 60, said.

That casual stroll into the recruiting office led to a 23-year Army career for Raimey, who retired in April 2001 as a major, just before he would have been promoted to lieutenant colonel. The decision came just five months before terrorists attacked the United States on Sept. 11, which likely would have sent Raimey overseas again.

He officially joined the Army in September 1978, completing six weeks of basic training at Fort Knox, Kentucky. He spent two years as a legal clerk for the 62nd Engineer Battalion in Fort Hood, Texas. He married Tammera — his high school sweetheart — on Jan. 23, 1979, during his time at Fort Benjamin Harrison in Indianapolis.

After Fort Hood, he was sent to Germany, spending three years there as a legal clerk for the 59th Air Defense Artillery 2nd Battalion.

“Legal clerks in the military are like civilian paralegals. I helped investigate cases and gave information to the JAG (Judge Advocate General) attorneys. I also acted as the court stenographer during court hearings,” Raimey said. “I loved it. I handled cases from drug possession to a murder.”

Raimey said he then went to Fort Carson, Colo., with the 4th Infantry Division, where a colonel convinced him to join the ROTC program. He was a sergeant at the time.

“I had been taking college classes in the evenings and on the weekends, so I went to the University of Southern Colorado for two years with a major in social work. He graduated first in his class in May 1986 with a bachelor’s degree in social work, receiving the “Social Work Student of the Year” award and being named a Distinguished Military Graduate for graduating at the top of his class.

“My guidance counselor was right. I would have been great college material,” Raimey said with a laugh.

After graduation, he spent four months at Fort Sam Houston, Texas, for Army Medical Branch Corps training. He then went to Fort Lewis, Wash., as a second lieutenant and medical platoon leader for the 2nd Battalion 23rd Infantry Regiment. He spent 18 months there before going to Frankfurt, Germany, serving as a patient administrator at V Corps Headquarters.

“I was responsible for putting together manning units for Operation Desert Shield. I realized they didn’t have a patient administrator, and I thought ‘uh oh.’ Sure enough, I was asked to go and I left the next day. It was two weeks before Christmas in 1990. My daughter was 10, and my son was 8. I remember saying good-bye to them and my wife. It was tough,” Raimey said.

He worked at the 12th Evac Hospital Unit, which was a Europe-based Army hospital located in the triangle between Kuwait and Iraq. He was in charge of finding evacuation routes out of Saudi Arabia for soldiers who were gravely wounded. He also arranged for the bodies of soldiers to be sent back home.

“Thankfully, I only had to do a few of those,” Raimey said.

In March 1991, he returned to his family in Germany and that summer, they went back to Fort Sam Houston, where he was stationed as commander of Army Medical Battalion Company A, in charge of 350 soldiers.

From there, Raimey became a patient administrator officer at the U.S. Army Hospital at West Point from 1995 to 1997. During that time, he mentored African-American cadets at the military academy.

He was promoted to major right before he left West Point and then went to Fort Eustis, Va., where he was chief of patient administration at the McDonald Army Command Hospital for two years.

During his two years in Norfolk, he spent two months escorting consultants to military bases, and he developed relationships with them. One of them convinced Raimey to retire from the military and take a job with his company.

He has been a health care consultant for four different firms over the past 18 years and now works for KPMG, one of the big four accounting firms in the U.S.