GM Lordstown plant to be kept in state of ‘readiness’ 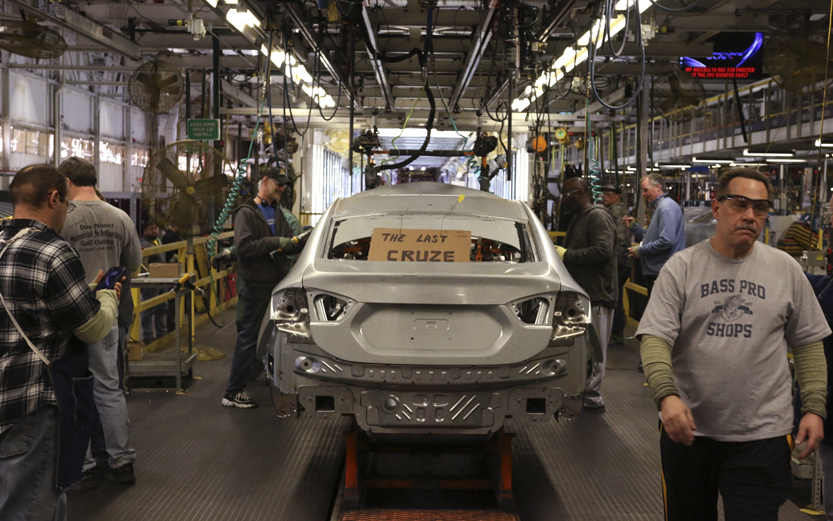 Special to the Tribune Chronicle / Kasey King Eric Lezaic, right, walks away as the last Chevrolet Cruze produced at the General Motors Lordstown plant progresses down the assembly line. The final vehicles are expected today in the paint shop, and the final car likely will roll off the line Wednesday.

LORDSTOWN — The General Motors Lordstown assembly plant — one of five in North America the automaker is idling this year — will be kept in a “state of readiness” after production of the Chevrolet Cruze ends Wednesday.

“There will be a staff of skilled trades to make sure everything is operating, to keep an eye on the facility, to make sure there is nothing that needs repaired, or if something needs repaired, it gets repaired,” said GM spokesman Daniel Flores. “The facility will be kept in a state of readiness because of its unallocated status.”

Flores said he doesn’t believe there are plans to move any of the equipment “because all that we definitively know is that production of the Cruze is stopping and we’re not going to be building Cruzes anymore. Beyond that it’s TBD,” Flores said.

The contract between United Auto Workers and GM expires Sept. 14. It’s expected the disposition of the plant — whether a new vehicle will be assigned to it — will be part of talks for a new collective bargaining agreement.

“The international union will be negotiating with General Motors later this year, and we’ve got some great leadership at the international level,” Green said. “Our fate is ultimately going to be decided at the bargaining table.”

Friday was the targeted last day for plant employees since GM announced in November it was idling the plants; however, production will end Wednesday, when, according to GM spokeswoman Kim Carpenter, the last Chevrolet Cruze will come off of the assembly line.

“It’s going to be a very emotional day for our members as they see that last car go by, but make no mistake, that last car is going to be built just as well as the first one was built,” Green said. “Our members have taken great pride in the products they build and work really hard to protect our customers.”

As employees finish their job responsibility on the last Cruze, they will be sent home. The plant had a full shift of about 1,400 workers Monday, likely the last day for a complete shift.

About 200 will remain working inside the plant to keep making hoods, doors and fenders for service parts for a few weeks.

The plant idlings come as the Detroit-based automaker moves toward shifting its focus to making trucks, SUVs and electric and autonomous vehicles. In the process, GM is shedding 14,000 salaried and blue-collar jobs, but the automaker has said most of its blue-collar workers who lose jobs in the U.S. will be able to transfer to other plants in the Midwest and South.

A total of 411 Lordstown employees who volunteered to transfer have been placed in jobs elsewhere so far. That is in addition to the 297 who left after the second production shift went away in June.

The last day for two other U.S. plants is May 3 for the Baltimore Operations transmission plant in White Marsh, Md., and Aug. 1 for the Warren Transmission Plant in Warren, Mich.

The company recently announced the fourth U.S. plant, Detroit-Hamtramck, that was to be idled on June 1, will continue production of the Chevrolet Impala and Cadillac CT6 into January 2020. The fifth plant is in Canada and does not employ UAW members.

There is a lawsuit in federal court in Youngstown to stop GM from idling the Lordstown plant and the two in Michigan.

The UAW claims an agreement it has with GM bars GM from closing any plant during the course of the existing collective bargaining agreement that doesn’t expire until Sept. 14. A GM spokeswoman said placing the plants on “unallocated” status does not violate the agreement.