Participants expect to enact change in community through groups, other actions 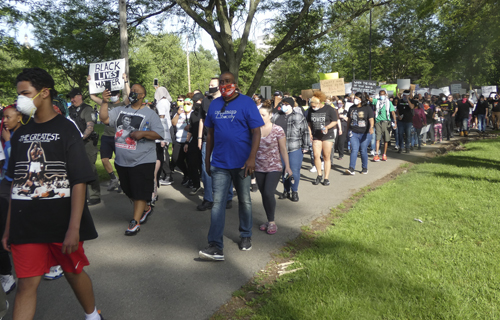 Staff photo / Raymond L. Smith More than 1,000 people turned out Monday evening in Warren to protest police treatment nationwide of African Americans. Here, the crowd makes its way to the Warren Community Amphitheatre in Perkins Park for a rally. No incidents of violence or vandalism occurred during the Warren event, unlike other protests throughout the state and country that resulted in looting.

WARREN — After organizing and leading one of the city’s most successful non-violent rallies, Ty Powell, 20, does not expect people to sit back and return to what was happening before Monday evening.

Powell and others in the community are expecting change — through individual action or by organized groups.

“I’m so proud of my city,” Powell said. “The turnout was amazing, and it consisted of such a diverse group of people who came together to rally for peace.”

She said she never expected such a large turnout, with more than 1,000 people protesting police treatment nationwide of African Americans. No incidents of violence or vandalism occurred during the Warren event.

“What is happening to black men and boys is important to me, so I wanted to do something,” Powell said. “I talked to a few of my friends and placed something on Facebook about doing a rally. The next morning it had so many responses.”

Powell said she has several male relatives as well as a 4-year-old son, so hearing about black men being harassed or killed for no justifiable reason concerns her.

“I want to do more,” she said. “I want to run for office and put myself in positions to have impact.”

After taking in what happened this week, Powell said she would like to have more community events to bring young people together.

“If we can build a foundation, then we can get things accomplished,” she said. “I feel motivated to do more for the city.”

Honeya Price, a local activist, said it is important for residents to join community groups.

“It can make a difference,” she said. “It might mean doing something like improving the street you’re living on. It might mean going to city council or school board meetings to learn what they are doing, affecting you, your children or your grandchildren.

“Each one of us can make a difference in our own ways.”

Vince Peterson, a longtime Trumbull County probation officer and a minister with a church in Akron, describes this as a time when open and honest dialogue can take place.

“The death of George Floyd may be this generation’s march across the Edmund Pettus Bridge in Selma,” Peterson said. “It was so blatantly wrong that no one can defend it. It has opened the eyes of some people to what black men and women have been experiencing.” Floyd died May 25 while in police custody in Minneapolis as an officer placed his knee on Floyd’s neck. The episode was caught on video.

“It is not about being black or white,” Peterson continued. “It is about humanity. No human being should have to die like that, especially at the hands of someone expected to protect and serve them. This moment can be used to build bridges between people.”

Peterson emphasized that many in law enforcement who worked the Monday afternoon event told him that they likely would have attended the rally even if they were not assigned because they wanted to show solidarity for the issues being raised.

“In my experience, many in law enforcement who viewed the video say what happened to Floyd at the hands of a police officer does not represent them,” Peterson said.

Quintin Burney, 19, a John F. Kennedy High School graduate, helped organize a second rally at the corner or Mahoning Avenue and Market Street a few moments after the official “We Matter” rally ended at about 8 p.m. A couple hundred people went to the corner and laid down on the street to demonstrate the position that Floyd was in when he died.

Nailah Thomas, 19, also of Warren, said that second rally took place because she and others were angry and were not satisfied simply walking around Courthouse Square one time.

“It was not that anything was done wrong in the first rally,” Thomas said. “There was a group of us who simply were not satisfied. It was like a Martin (Luther King) and Malcolm (X) moment. We needed something else done to express how we were feeling.”

The group got up and began chanting the names of people who they felt had suffered at the hands of law enforcement.

“Some people went down on their knees, others laid down, while making sure to stay far enough from the officers,” she said. “We wanted them to hear us. We (rally organizers) both are fighting for the same thing. We just approached it differently.”

The group then marched to the Trumbull County jail with hands up, yelling, “Don’t shoot me.”

Thomas, who also this weekend attended the rallies in Cleveland and Youngstown, said she believes young people have to remain vigilant and continue to use their voices to address the issues they feel are important.

“They can’t take away our voices,” she said. “Talk to one another, use social media and take whatever means to make sure our stories are being told.”

The Rev. Todd Johnson of Second Baptist Church said he plans to step up efforts to increase black voter registration in Warren. “We want to get them engaged in the process. It is not only about what is happening in Washington, but issues we are facing every day in Warren,” he said. “We want to educate people on the issues.”

Miles Jay, an activist with Trumbull Neighborhood Partnership, said this week’s rally reminds those older community leaders that they can lean on the youth and should support them in their agendas.

“We should be there to provide advice we learned from our experiences,” he said.

Jay also will be pushing voter registration and getting people out the vote.