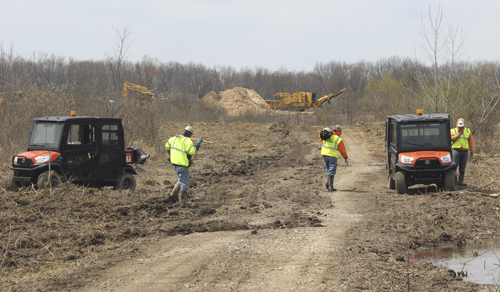 Staff photo / Allie Vugrincic Construction workers with Laborers Local 935 out of Warren begin to clear the General Motors property off state Route 45 in Lordstown on Wednesday afternoon. The last permit for the site was approved Wednesday and work began almost immediately.

LORDSTOWN — With the last environmental permit the automaker needed to start construction on a more than $2 billion next-gen battery-cell plant in hand, General Motors has begun grading and clearing land at the site.

The work started Wednesday, a day after the U.S. Army Corps of Engineers gave GM the environmental OK to discharge fill or dredged material from construction into streams and wetlands for which the corps of engineers is responsible.

The corps of engineers didn’t announce the permit approval until Wednesday afternoon.

Also Wednesday, the Western Reserve Port Authority agreed to bring the project into its capital lease program, a move that will save GM millions in construction costs.

The federal certification follows approval from the Ohio Environmental Protection Agency last week to ensure whatever material ends up in the streams or wetlands falls within the state’s water quality standards.

“We have an aggressive schedule and we really appreciate the support we have received from the community and government agencies on this important project,” GM spokesman Dan Flores said.

The permit was issued to GM on behalf of GigaPower LLC, the working name for the joint venture between GM and LG Chem of South Korea, under the federal Clean Water Act. GM has applied for all permits so far on behalf of the partnership.

“The permit authorizes the placement of fill material into approximately 66 acres of wetland and 81 linear feet of stream for construction of the plant and attendant features,” Scott Hans, chief, regulatory division, Pittsburgh District, said.

GM plans to mitigate the damage at the building site by converting about 170 acres — 40 more than required — of property on Mahan Denman Road in Mecca Township to wetlands.

GM will be responsible for monitoring the Mecca site for 10 years to ensure its success, but then it reverts back to the Ohio Department of Natural Resources and will be wetlands in perpetuity.

Under terms of the agreement with the port authority, it will own the project and lease it back to GM for a period of time, typically five years. It’s a financing mechanism that port authorities in Ohio have available to exempt sales tax on construction-related materials.

He was hesitant to say how much money the deal would save GM because numbers can change, but as a general rule of thumb, about 50 percent of the building cost is construction-related materials.

A formal agreement will be finalized within the next three months.

“They do want to keep moving to order material under the temporary certificate,” Trevena said.

Trevena said Wednesday it was U.S. Rep. Tim Ryan who introduced the lease structure to GM CEO Mary Barra during an in-person meeting as part of an incentive package to help land the project.

Ryan, D-Howland, said it “made perfect sense” to connect GM with the port authority on the capital lease and other programs that might offer special financing opportunities “to help seal the deal.

“This is another example of how the WRPA has created a legacy of being an important partner in economic development in our community, and I am proud of the work they’ve done,” Ryan said.

Another notable project with the same involvement from the port authority is the distribution center in Lordstown for off-priced home fashion and decor retailer HomeGoods.

The plant will be on 158 acres on Tod Avenue immediately east of the automaker’s former assembly plant. GM bought the land, which it previously owned.

GM had unloaded the land during its 2009 bankruptcy, but bought it back for $5.1 million from NP Lordstown 173 LLC, an affiliate of Kansas City-based North Point Development.

GM wants the plant built by January 2022. It figures to play a huge role in the automaker’s all-electric future with cells made at the plant used in packs that will power 11 of 13 vehicles GM plans for in the next five years. Those cells also will be used in packs in two new electric vehicles GM and Honda are jointly developing for the Japanese automaker.

The plant will employ upward of 1,100 people.