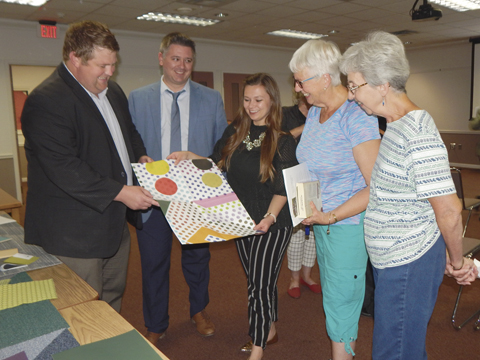 David Snyder and Matt Trafis with IAP and Nicole Kules of K2MDesign, shows design plans for the planned remodeling of Newton Falls Library to Carol Baker and Shirley Hill.

NEWTON FALLS — The Newton Falls Public Library is planning to use space more efficiently as it prepares for a $915,000 renovation project to begin in 2020 that will create more public service and gathering spaces for the community.

Library officials and board of directors met Wednesday with K2M Design, an architectural firm, and IAP Government Service Group, construction managers, and discussed the planned project that will focus on renovating current areas into contemporary space.

Kerry Reed, library director, said library officials gathered information from a community survey and from local focus groups and found what they are interested in when coming to the library. One of those items was having a place to meet.

“We are very excited about what will take place. Because the library is a popular gathering place, we want to be one of the most welcoming places in the community,” she said.

The current library was built in 1984 with an addition built in 1989 to increase square footage.

Plans are to enlarge the children’s and teens’ sections from 1,694 to 2,520-square feet on the first floor, creating more space for the local history and genealogy area on the second floor, as well as other renovations to create more space in areas used by many patrons.

The project also will include new flooring, wall coverings, furniture, museum cases, shelving and additional power sources. The lobby will be redesigned with a modernized circulation desk, Reed said.

“We are trying to give the library a general update in its look and bring in new trends. Libraries are turning to more interactive activities, teen study spaces and more technology areas. Libraries used to be where you would go get what you need and check it out. Today, libraries are more for going to meet people and hold meetings or hang out,” said Tara Pesta, an architect with K2M Design.

Reed said libraries are digitizing more of their collections and materials and putting more and more online, which creates more gathering spaces for programs and activities.

Reed said since the project is for renovation of current space and not an expansion, the project does not require passage of a levy.

She said the renovation is being covered by donations acquired through the capital fund over the past 25 years and income received from the Alma M. and Peter G. Murri Trust since 2014.

Matt Trafis, account manager with IAP, said the project will next be put out for bid.

A table was set up at Wednesday’s event where people could see the style and colors for panels, flooring and wallpaper for the rooms.

David Snyder, project manager, said the project has received input from the public on what they would like to see.

Resident Harry Benetis said he looked over the plans and believes the project will be a benefit for the community.

“I think this is needed and will be appreciated by the public,” he said.