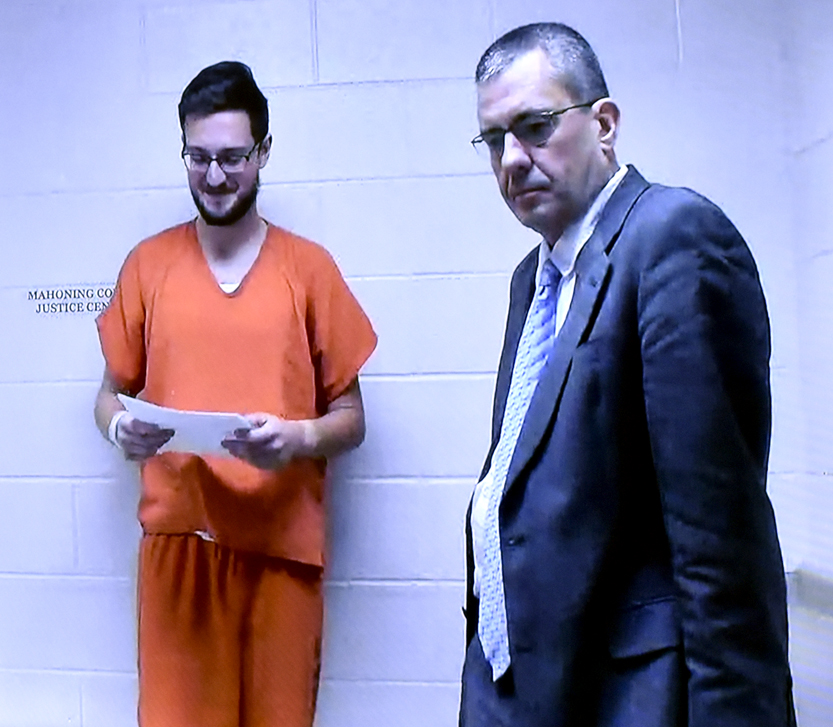 STRUTHERS — A man who had a working Nazi submachine gun and white nationalist and anti-Semitic propaganda in his home should not be considered a white nationalist, his attorneys said after his arraignment Monday on charges associated with a video that seems to threaten violence against the local Jewish community.

The Maschinenpistole 40 was developed in Nazi Germany and can fire more than 500 rounds per minute. The gun and several others — including two AR-15s and a bolt action rifle — were seized Friday when police searched the home James Reardon, 20, shares with family on Eastwood Drive in New Middletown, village police Chief Vince D’Egidio said.

Reardon is being held in the Mahoning County Jail, where he appeared Monday afternoon in a video arraignment in Struthers Municipal Court. He pleaded not guilty to misdemeanor charges of telecommunications harassment and aggravated menacing.

Judge Dominic R. Leone III kept Reardon’s bond at $250,000 and said 10 percent would be accepted as collateral. If Reardon makes bond, the judge said Reardon would be under house arrest with no work release, must stay 500 feet from any Jewish place of worship or community center, is not allowed on social media sites, cannot have any weapons and he and those around him will be subjected to random searches through the court’s probation department.

Reardon is scheduled to appear 11 a.m. Sept. 13 for a pretrial hearing. He privately is paying for attorneys.

In an orange jumpsuit with his hands cuffed, Reardon stood before the camera with an attorney. Numerous reporters were in the room and so were Reardon’s family members.

Ross Smith, a Youngstown attorney representing Reardon, said after the hearing it was “unfair” to call Reardon a white nationalist — someone who believes people who are not white are inferior and the country should consist of just white people.

Reardon is accused of posting an online video taking credit for a shooting that has not happened at the Jewish Community Center of Youngstown, according to information provided by investigators. Although the shooting hasn’t happened, Reardon’s post came with a headline labeling himself as a white nationalist, using the Gaelic version of his name.

Reardon attended the “Unite the Right” rally in Charlottesville, Virginia, in 2017, according to media reports. Photographs have surfaced from the rally showing then-18-year-old Reardon holding a Vanguard America shield. Vanguard America is “a white supremacist group that opposes multiculturalism and believes America should be an exclusively white nation,” according to the Anti-Defamation League.

Smith and Youngstown attorney Eddie Czopur — also representing Reardon — said they aren’t nervous to be associated with someone accused of being a white nationalist.

“Things aren’t always as they seem,” Smith said. “Everybody deserves a defense attorney. We all deserve our day in court.”

D’Egidio said the conditions of Reardon’s bond should ensure he is not a danger to anyone, if he is released.

When he was a child, Reardon was involved in some minor “mischief” with friends, but nothing major, D’Egidio said. The chief knows of no other run ins with the law, he said.

Although talk of white nationalists threatening and committing terrorist acts has been circulating around the country, D’Egidio said he never expected it to happen in his village.

“It is disturbing,” D’Egidio said. “We live in a society where everyone wants to resolve their issues with a gun, with no thought process.”

Reardon’s mother was home when the search began and he was arrested without incident after arriving at the residence a short time later, D’Egidio said.

D’Egidio stressed anyone who hears of or sees threats, online or in life, should report them to the local authorities.

“If you see something, say something,” D’Egidio said.

Earlier this month, Justin Olsen, 18, Presidential Court, Boardman, was charged with inducing panic and aggravated menacing threats against an officer after online posts threatening violence against federal agents and Planned Parenthood surfaced. He is being held in federal custody while a grand jury considers federal charges.

During a search of Olsen’s home, law enforcement discovered about 10,000 rounds of ammunition of different calibers, a Glock firearm in the living room, a locked gun safe in a closet of the master bedroom with about 26 firearms inside it, a body armor vest and camouflage backpacks stocked with supplies like water and duct tape, referred to by the prosecution as “blowout kits.”