Paramotorists run or roll into flight 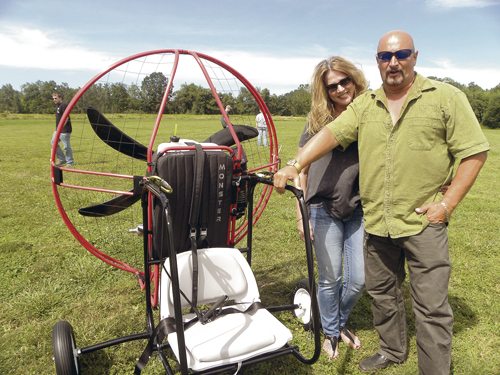 Tribune Chronicle / Emily Earnhart Kurt Fister, 55, of Newton Falls, a pilot, teacher and inventor, shows off his personal aircraft that when attached to a large parachute allows a single paramotor flier to be seated throughout flight, from takeoff to landing. Fister’s invention has helped wounded warriors and others fly. Paula Ray, 49, said she has not taken off alone yet but has flown in tandem with Fister.

BRACEVILLE — About 50 paramotorists hoped to take flight Saturday evening at Carvers Airfield on state Route 82, but Mother Nature had other plans.

Attendees of the 2017 Flight Junkies reunion hoped the wind would die down a bit before Saturday evening so they could take to the skies, but it was not meant to be. Organizers said they would try again this morning.

Reunion host Kurt Fister, a former skydiver and stunt pilot turned inventor and instructor, had trained many of those in attendance Saturday at his airfield.

“We are hoping the wind will die down. We got winded out today; it was so breezy,” Fister said.

Paramotor pilot Tim Nash, 60, of Warren, said there is nothing like the sport that is related to paragliding in which fliers depend on wind that is calm and steady.

“We fly in the morning and the evenings because of thermals,” Nash said.

Thermals, where air rises and falls, help to lift the soft wing of the parachutes that will collapse and prevent flight in too rough or high-speed winds. Morning and evening flights, usually three hours after sunrise and three hours before sunset, are best.

“The beauty in this is you can go low and slow, so you can see stuff,” Nash said.

The flight controls are easier than on other aircraft Nash has piloted, a Cessna, for example, but he contends that paramotoring is more fun.

Nash’s foot-launched paramotor vehicle is something that at first sight looks more like a large fan attached to a Hula hoop. When in flight, the motorized “back pack,” as Nash referred to it, loses its weight and the harness becomes a seat.

“You have controls to turn left and right, pull down you go down. It’s like sitting in a chair,” he said.

Some paramotors do have actual chairs and wheels, thanks to inventors like Fister whose original fly-pod trike uses wheels and hard metal chairs attached to the fanlike hoop motor as landing gear for takeoff, allowing even wounded warriors and those with limited abilities to fly, he said.

Whether by foot or with wheels, pilots hoped the conditions this weekend would lead to fair winds.

New Jersey native David Fernandez, 48, was “kiting his wing,” to prepare for the flight stopped earlier in the day by high winds.

“I’m just feeling out the chute, it’s like it’s a big kite,” Fernandez said. “The main thing you have to learn before flying is groundhandling, to center the wind over your head, so you take off straight and into the wind.”

Pilots have to feel out what the wind is doing, he said, and once comfortable, can let go of the controls once in the air.

Winds of about 15 mph or less are required to fly, he said.

Like most of his fellow Flight Junkies, it is the experience of flight that draws him in.

The Flight Junkies hope to take to the skies this morning if the wind conditions are right. If you want to watch the paramotorists, head to Carvers Airfield on state Route 82 in Braceville.