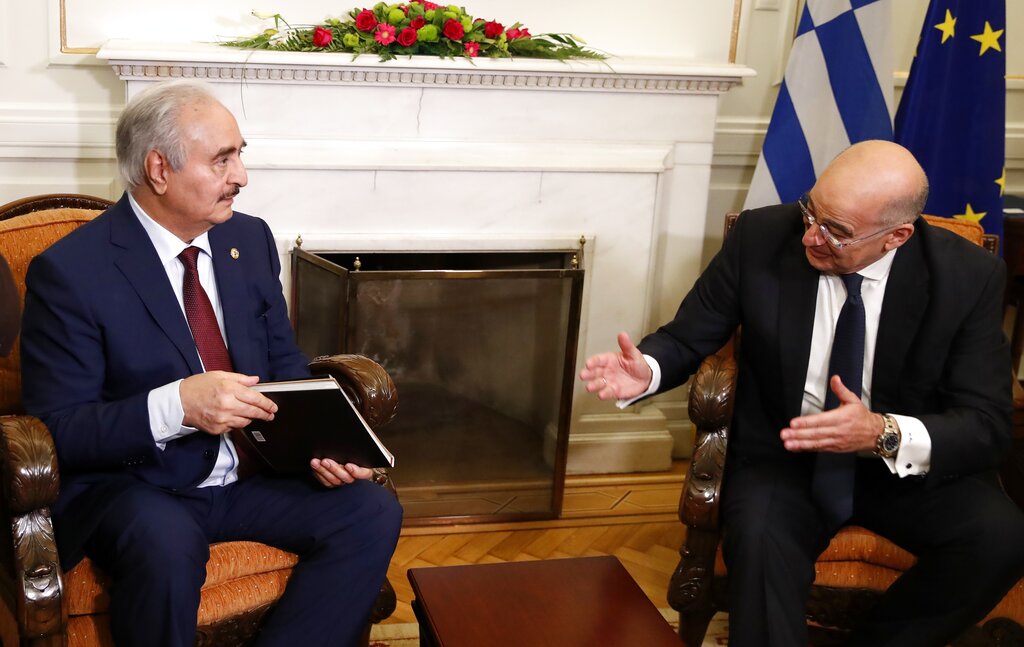 Libyan Gen. Khalifa Hifter, left, receives a book as a gift from the Greek Foreign Minister Nikos Dendias during their meeting today in Athens. The commander of anti-government forces in war-torn Libya has begun meetings in Athens in a bid to counter Turkey's support for his opponents. (AP Photo/Thanassis Stavrakis)

ATHENS, Greece (AP) — The commander of forces fighting the U.N.-supported government in Libya visited Athens today in a bid to counter Turkey’s support for his opponents, ahead of a weekend summit on Libya in Berlin.

Gen. Khalifa Hifter’s surprise trip to Greece came two days before the Berlin summit, which aims to halt the conflict in oil-rich Libya that is being fueled by competing international support for the warring sides.

Separately, the Kremlin announced that Russian President Vladimir Putin would be attending the meeting in Germany.

Turkey, which has promised to send troops to back Libya’s government against Hifter’s offensive, is at odds with Greece over oil-and-gas drilling rights in the East Mediterranean.

In November, Turkey and the Libyan government in Tripoli signed a controversial maritime deal delineating a boundary between the two countries in the Mediterranean. Libya has been divided between two competing governments since 2015, one based in Benghazi in the east and the other based in Tripoli.

The agreement would give Turkey and Libya access to an economic zone across the Mediterranean despite the objections of Greece, Egypt and Cyprus, which lie between the two geographically. All three countries have blasted the deal as being contrary to international law, and therefore invalid.

Greek Foreign Minister Nikos Dendias, speaking after meeting with Hifter, said the Greek government had encouraged the Libyan general to “participate (in the Berlin meeting) constructively” and to work toward achieving a cease-fire and restoring security in Libya “by removing mercenaries and by the recognition of the invalidity of the illegal agreements” between Turkey and the government in Tripoli.

“l must tell you with great pleasure that the commander agreed to all of those remarks,” Dendias said, adding that Greece wants Libya “to be a modern country, a modern democratic country.” The minister said Greece was willing to help police a European ban on arms shipments to Libya.

Hifter made no comments after his talks with Dendias, and then headed into a meeting with Greece’s prime minister, Kyriakos Mitsotakis.

Mitsotakis, who was not invited to the Berlin summit, said late Thursday that Greece “will never accept a political solution for Libya that does not require the cancellation” of the maritime deal with Turkey. “We will use our veto before the case gets to the summit meeting. We will veto it at a foreign ministers’ level,” he said.

However, it was unclear exactly what Greece could block, as the summit in Berlin is not being held by the EU and a Libyan peace deal does not need EU approval. A Greek official, speaking on condition of anonymity, said the veto would be applied to “any decision concerning Libya on a European level if it doesn’t include the annulment” of the maritime deal.

In Moscow, the Kremlin said Sunday’s talks in Berlin would focus on a cease-fire and the launch of a broad political dialogue under the United Nations.

Russia and Turkey held talks with the warring sides in Moscow on Monday, focusing on a cease-fire agreement. Hifter and Fayez Sarraj, the head of Libya’s U.N.-recognized government in Tripoli, didn’t meet directly in Moscow and held separate talks with Russian and Turkish diplomats and military officials.

But Hifter refused to sign the cease-fire document that was signed by Sarraj.

Russia’s acting foreign minister, Sergey Lavrov, said today the most important outcome of the talks was that the truce was still holding in Libya.

Turkish President Recep Tayyip Erdogan, however, expressed doubt today that Hifter would abide by any cease-fire.

“This man is not a trustworthy man,” he told reporters in Istanbul. “Yesterday, they continued to bomb Tripoli.”

“My hope is that he will stand behind the promise he made,” Erdogan said.