Pentatonix takes a cappella to arenas 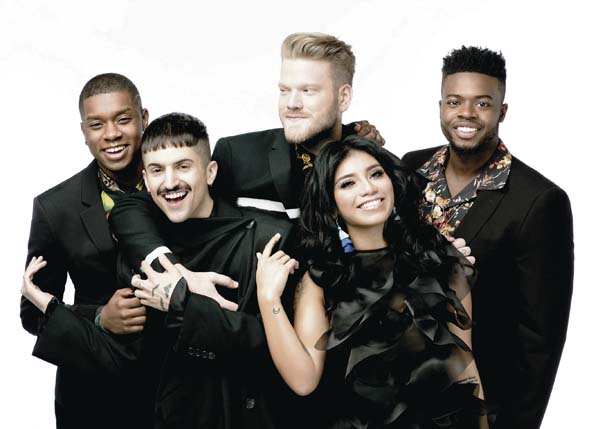 There really is no precedent for what Pentatonix has accomplished.

A cappella singing groups have existed forever, and many have been successful in recent years, thanks to exposure through the television series “Glee” and the “Pitch Perfect” movies. But Rockapella didn’t go from singing the “Where in the World Is Carmen San Diego?” theme song to topping the charts; Straight, No Chaser primarily plays theaters on its tours.

Pentatonix, which got its start creating all-vocal arrangements of contemporary hits on the reality competition series “The Sing Off,” gets as many plays on YouTube as the acts it has covered. The group headlines shows at venues like Madison Square Garden and the Los Angeles Forum, the same venues played by Ariana Grande, Bruno Mars and other pop stars.

Take 6 may have more Grammys — 10 to Pentatonix’s three — but it doesn’t headline venues the size of the Garden, the Forum or the Canfield Fairgrounds grandstand, where Pentatonix will sing on Sunday.

“When we started doing the songs, it was mainly for fun,” said Scott Hoying, one of the group’s founders. “We didn’t know what it would lead to. We had high hopes something huge would come from it, but we’ve obviously exceeded expectations.”

Winning season three of “The Sing-Off” presented the group’s music to a national audience. But the grand prize, a recording contract with Epic Records, turned out to be a bust. Maybe because the first two “Sing Off” winners (Nota and Committed) didn’t light up the charts, Epic quickly dropped Pentatonix.

“That would have been our story back in the day,” Hoying said. “We didn’t have a label. We didn’t know what to do. We took it to YouTube and connected with the fans directly.”

While many established artists complain about upheaval in the music business caused by the rise of streaming, the diminished power of record labels and the sheer glut of options for listeners, those factors helped make Pentatonix’s success possible.

“I hope we would still be successful without social media, but I really don’t think so,” Hoying said.

Pentatonix — Hoying, Mitch Grassi, Kirstin Maldonado, Kevin Olusola and Matt Sallee — expanded on its formula with the 2015 album “Pentatonix,” which featured 12 originals among its 13 tracks that were written or co-written by the group. The lead single, “Can’t Sleep Love,” cracked the top 40 on the pop chart.

The band currently is working on songs for its next collection of originals, which Hoying said he hopes will be released next year. There’s also a “theatrical” project in the works that he wasn’t ready to talk about yet.

Covers are quicker to arrange and record, he said, which is why Pentatonix has released an album of pop covers and EP of older songs and two Christmas collections since 2015. There was a lot of trial and error in picking cover songs in the early days, but the group has learned to gravitate toward material with a lot of melody.

“We kind of know what songs to do now,” he said. “We’ll sit in a circle. Kevin will start beatboxing, and Matt will sing chord progressions, improvise background parts.”

Those raw tapes might not sound like much, but the group’s arranger is able to transform them into vocal parts for all five members.

Another challenge unique to Pentatonix is how to structure those songs into a set list. Unlike a vocalist or vocal group with a backing band, the members of Pentatonix can’t rest their voices during the guitar solo. They are the guitar solo and the percussion as well as carrying the melody.

“Singing a cappella is extremely tough vocal stamina-wise,” Hoying said. “It really is about pacing yourself. We’re so regimented in what we do, how much water we drink, when to sing a little softer and left the microphone do the work and when to let it all out.”