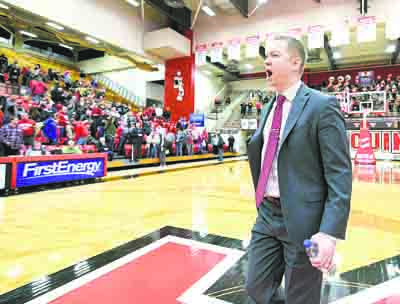 Jerrod Calhoun sees his wife, Sarah, more often than not these days.

His daughters, Kennedy, Kendall and Quinn, you can hear in the background from his Mahoning Valley home. They are sounds Calhoun doesn’t hear that often this time of the year.

The Youngstown State University men’s basketball coach and his staff are usually on campus recruiting, monitoring an off-season workout, out watching a prospective player on the AAU circuit or having an in-home visit.

The COVID-19 pandemic has put in-person contact on hold, giving the YSU coach more time with his family — instead of cramming in a one- or two-week vacation to get that quality time.

“As a coach, you love the competition,” Calhoun said. “You want to compete. Right now, we’re setting daily goals. We have a lot of things going on with our kids. We have a 1-, 3- and 6-year-old. I’m spending a ton of time with them I wouldn’t normally get. I feel very blessed in that regard. It’s just different. I think most family are getting in a routine right now, make sure we’re doing what we’re supposed to do with the proper precautions.

Calhoun spent last week going through post-season interviews with him, the player and position coaches on Zoom conference calls.

He sends some kind of inspiration, albeit a video or article, every day, even guest speakers on weekly chats. His players are using an app on their phones where it gives two to three exercises per day — combining meditation and physical fitness. Calhoun and his staff wants to be there for his team.

“We’re going to have different people jump on the Zoom call and give our guys inspiration, maybe talk about a different topic from week to week,” Calhoun said. “Trying to be strategic, making sure the kids’ spirits are up, make sure they’re healthy, make sure they continue to learn and stay on top of the academics. There’s kind of a lot going on. Although we’re not training and physically seeing each other, there’s still a lot going on.

“As a coach, we’re not coaching basketball. We’re coaching our players and try to help them get through this difficult time.”

With this pandemic, the only thing Calhoun and his staff can do with the newcomers is get to know these five better — no basketball material.

Usually, newcomers would be on campus in June, but that is in doubt.

“When we come back, probably in August, hopefully in August,” Calhoun said. “We’re going to have to speed up the learning curve with five new guys.

“With losing so many seniors the following year, we feel this is going to be the future of the program — some of these guys we brought in.”

Most of his team’s players are home with their families, except Olamide Pedersen, who is in the transfer portal, and Jamir Thomas.

“They are going home (soon),” Calhoun said. “They’re finishing up their academics and they’ll be able to go home.”

UPCOMING SCHEDULE: The current state of the YSU athletic department budget, as it will all over the country, took a hit because of the current shutdown due to the COVID-19 pandemic.

Calhoun said he and his staff want to help the Penguins.

“We’ve got to be creative,” he said. “What we’re trying to do to help the university is play an extra buy game. We’re going to take that money and it’s going to go right back to the athletic department to help during this unfamiliar time. (YSU director of athletics) Ron (Strollo) and I talked many times about it. We have to do our part. Everybody has to do their part during this time. We’ll have the games done in the next two, three weeks. Then, we’ll be able to announce our schedule.”