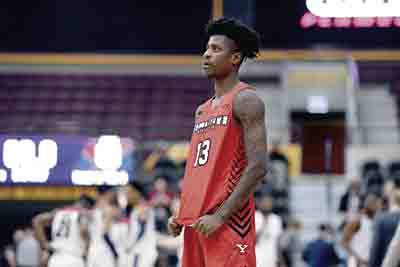 Correspondent photo / Robert Hayes Donel Cathcart III looks up at the scoreboard after the final buzzer in YSU's 67-61 loss to the UIC Flames at the Gentile Arena on Thursday.

Correspondent photo / Robert Hayes Donel Cathcart III looks up at the scoreboard after the final buzzer in YSU’s 67-61 loss to the UIC Flames at the Gentile Arena on Thursday.

Correspondent photo / Robert Hayes Garrett Covington shoots a 3-pointer during the first half of YSU’s Horizone League quarterfinal matchup with UIC. Covington tied for the game-high with 17 points.

It eventually resulted in a loose ball, finally heading to the Youngstown State University men’s basketball team as the Penguins trailed by seven points with less than 3 minutes remaining Thursday night. 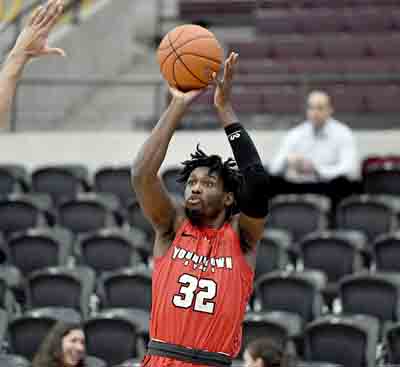 Correspondent photo / Robert Hayes Garrett Covington shoots a 3-pointer during the first half of YSU’s Horizone League quarterfinal matchup with UIC. Covington tied for the game-high with 17 points.

It didn’t matter, as YSU couldn’t get to the offensive rebounds, and rebounds in general, and the Penguins’ second-half theatrics came up short in a 67-61 loss to UIC in a Horizon League quarterfinal at the Joseph J. Gentile Arena on the campus of Loyola (Chicago).

“That one really hurt,” YSU coach Jerrod Calhoun said. “Honestly, that’s been our Achilles’ heel all year — having that discipline, that fire in your gut, the toughness to box your man out. They’re long. They’re lanky. You have to give them a lot of credit. They really attacked the glass.

“That one possession kind of summarized the game.”

UIC’s Godwin Boahen missed the front end of a one-and-one with about 22 seconds left. It didn’t matter to Michael Diggins as he grabbed an offensive rebound. He made two free throws a couple seconds later. Diggins had a game-high 17 points.

Naz Bohannon, who had 11 points for the Penguins, made two free throws with 25 seconds left to cut the UIC lead to 63-59. Four points is all the closer YSU got to the Flames.

“They had more toughness, more will to get the ball,” Covington said. “They have a strong, inside presence. We fought. It wasn’t the outcome we wanted, but things happen and we have to go back to the drawing board and find ways to get better.”

The UIC pep band played Frankie Valli’s ‘Can’t Take My Eyes Off You’ about 10 minutes before tipoff. It was hard to take your eyes off the illuminated sights inside the Joseph J. Gentile Arena on the campus of Loyola (Chicago) University.

The newly renovated venue of the Ramblers brought in a handful of spectators who entered Thursday’s game free because the UIC Pavilion on the south side of Chicago was being used for a high school robotics convention.

That’s why the game was moved to the north side at Loyola.

What was there to see in this first 20 minutes?

Not much offense. The Penguins struggled as they were 10-of-35 from the floor and 2-of-12 from 3-point range in the first half.

Neither team shot above 37 percent for the game.

“It was really, really ugly on both sides,” Calhoun said. “Really felt bad for (UIC coach) Steve McClain. I can’t believe they would not have their own building. I don’t know what happened there, but I was shocked.

“We missed a lot of open looks in that first half, a lot of layups, a lot of 3s. They just didn’t go down today for us.”

UIC heads to Indianapolis for the semifinals of the league tournament to face second-seeded Northern Kentucky on Monday.

Meanwhile, YSU is looking at a bid in the CollegeInsider.com Tournament in mid March when the Penguins could host two home games.

“I’m not going to lie, I wanted to compete to play in the NCAA Tournament,” Covington said. “Take this loss and it’ll be fuel for our fire.” 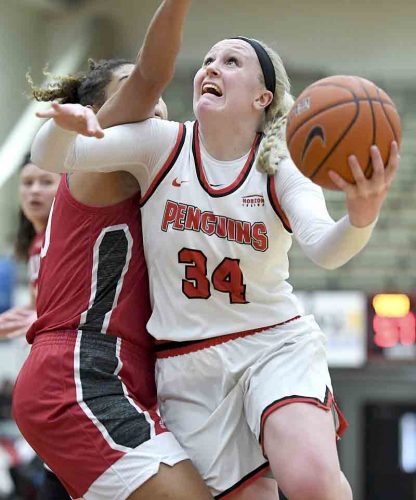