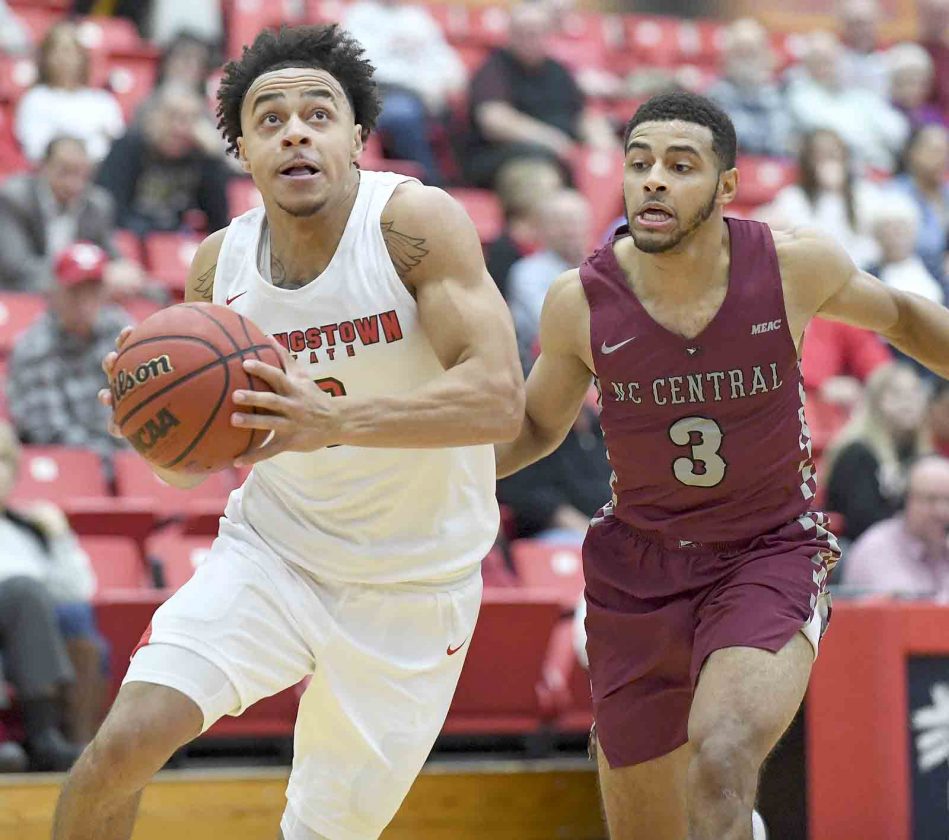 Correspondent photo / Robert Hayes Darius Quisenberry, left, of YSU drives toward the basket while being pursued by Ty Graves of North Carolina Central during the second half of the Penguins’ 66-60 win at the Beeghly Center.

The Youngstown State sophomore guard was active around the basket in the 2 minutes as the Penguins basketball team looked to break a late tie with the Eagles on Tuesday at the Beeghly Center.

Simmons and Donel Cathcart III each made two free throws as the Penguins pulled ahead for a 66-60 win. YSU was 13 of 15 from the foul line.

YSU (2-2) had to make its own magic from the defensivee end against an Eagles team that has had four NCAA Tournament appearances since 2014. 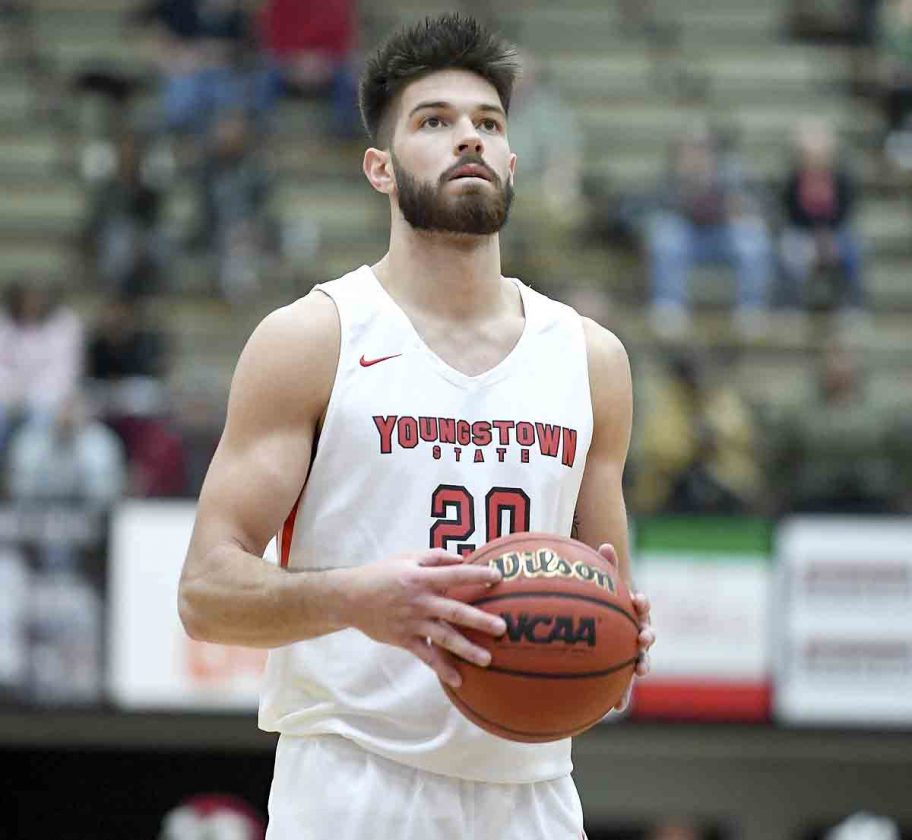 Penguins redshirt sophomore Geoff Hamperian, a non-scholarship player, has had that same resolve, practicing long hours in the Beeghly Center when no one but another teammate, friend or select few are watching the Morgantown, West Virginia native hone his skills — waiting for his moment.

Tuesday, it was his time as Hamperian made the first start of his career.

YSU junior Naz Bohannon noticed the tireless efforts Hamperian made during practices, the offseason and on his own time. Bohannon, a 6-foot-6 Lorain native, is known to be a fierce rebounder. He had 19 points and 11 rebounds against a run-and-gun team. The Penguins dominated the boards 42 to 28, with 18 offensive rebounds. Bohannon had five of those offensive rebounds.

He and sophomore Darius Quisenberry led YSU. The young guard had 17 points by driving through the Eagles defense.

The important line belonged to Hamperian, who was 4-of-5 from the floor, 3-of-4 from 3-point range and 3-of-4 from the foul line for a career-high 14 points. 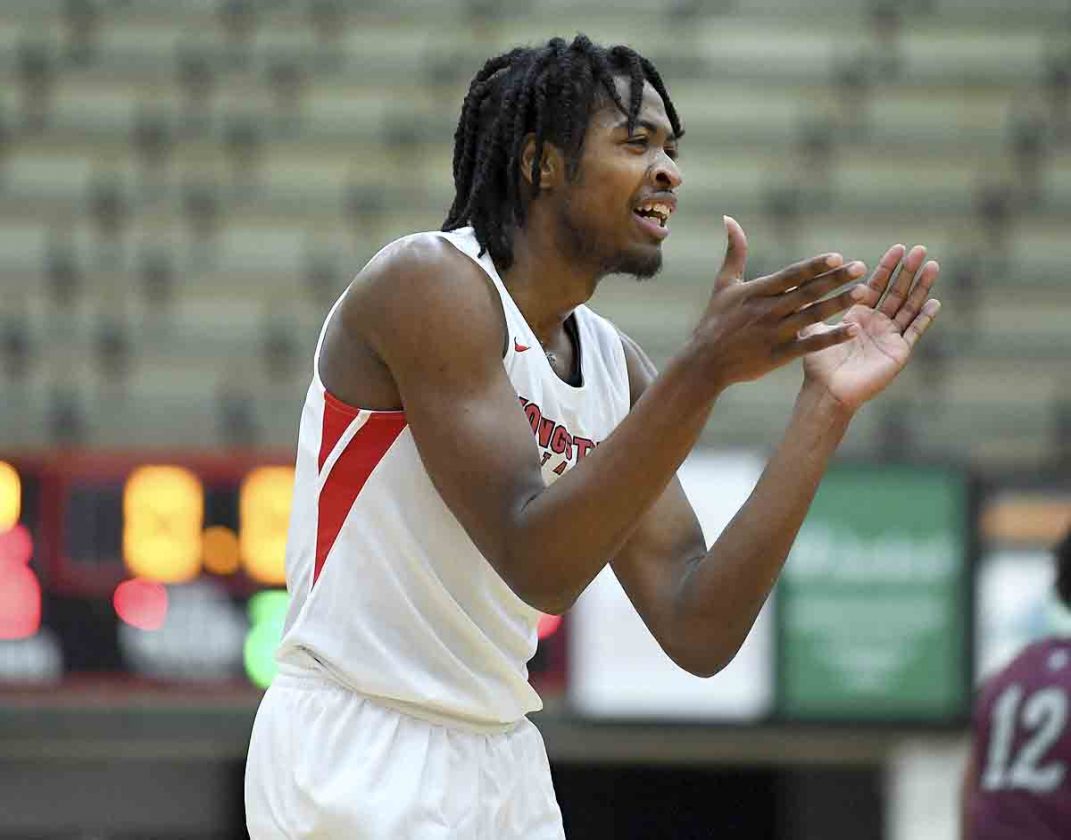 Correspondent photo / Robert Hayes Jelani Simmons claps while the final seconds tick off the clock at the end of the Penguins’ 66-60 win.

“Geoff is what college basketball is all about,” Bohannon said. “Since we got here three years ago in June, Geoff ain’t never left the gym. He’s waiting on his number to get called.

“His number got called, and we all knew what he was capable of. The rest of the world didn’t know, and he proved it.”

YSU coach Jerrod Calhoun was a non-scholarship player like Hamperian for the first part of his career at Cleveland State in the early 2000s for the late Rollie Massimino. Calhoun eventually was made a scholarship player for the Vikings, getting 14-15 minutes per game.

“All those guys, they were ecstatic for a kid like that.”

The previous two days, the scout team, which Hamperian is part of, dominated practices. Calhoun thought about that result and his redshirt sophomore.

“I don’t really sleep much the night before a game, a lot of thoughts go through your head,” Calhoun said. “I’m putting him in there. I’m going with my gut feeling, and really it’s not a gut feeling. He deserved it. He had the best 48 hours at practice. It’s so exciting as a coach to see a kid who works his tail off in the classroom. Most of the time he’s on the scout team. He doesn’t know our offense.

“He’s asked to do a lot with the other team’s stuff.”

Hamperian made the second of two free throws with 5:30 left in the first half as YSU took a 29-17 lead.

He had 12 of his 14 points in the first half as the Penguins dominated the Eagles.

The YSU redshirt sophomore waited his turn in the southeast entrance of the Beeghly Center with the other four Penguin starters.

“I was really nervous, but I knew a lot of hard work was going to pay off sometime,” said Hamperian, whose team plays Thursday at Akron. “I’m ready whenever coach tells me, to play 3 minutes or the whole game, to be ready to play hard the whole time.”

That’s exactly what he did during his 24 minutes and 56 seconds Tuesday on the Beeghly Center floor.