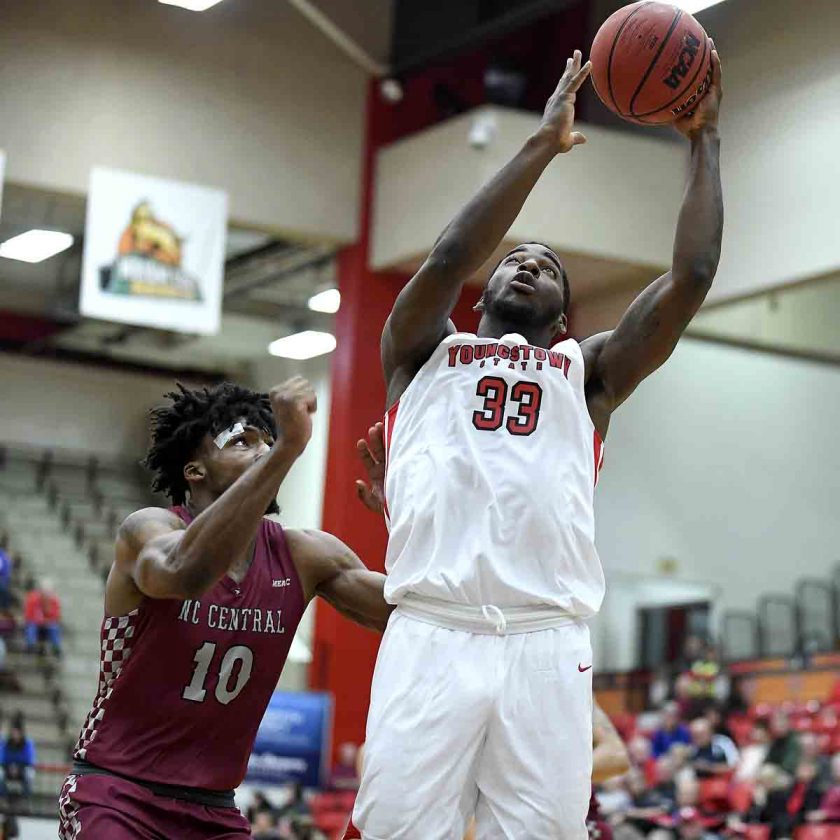 Correspondent file photo / Robert Hayes North Carolina Central’s Evan Clayborne, left, guards Youngstown State’s Naz Bohannon on Nov. 19 in Youngstown. Bohannon has been a force for the Penguins in the post this season.

It’s all in an effort to hold players accountable each and every game — finding out how productive players are during games.

Junior Naz Bohannon has adhered to the team’s scouting reports and the closest on the YSU team to averaging a double-double with 8.5 points and seven rebounds in the first six games.

Bohannon has 22 offensive rebounds and 20 defensive boards and has been part of the team’s defensive push of holding teams to around 68 points per game.

“If you were in the red, it means you weren’t as good as you need to be,” said Calhoun, whose team hosts Westminster tonight at 7 p.m. “We want a lot of our guys in the green. They’re contesting balls, contesting shots. They’re not letting their man score the ball.

“Naz, lately, has done a phenomenal job of that. I think our guys are getting better at that, they’re holding themselves more accountable, starting to understand the little nuances in basketball to help you win. It just develops championship habits — finish plays. Really how we won the game at Upstate was our defense.”

The two talked before the season about Bohannon’s role. The Lorain native has lived up to his end of the bargain.

“He asked me to be a double-double guy and be our presence inside,” said Bohannon, who had a double in a 66-60 win over North Carolina Central. “That’s what I’m trying to take pride in.”

He said the Penguins (3-3) have to know their roles as well to be successful going forward.

“Get everybody to stay cohesive,” Bohannon said. “Togetherness has been our word for the non-conference. If we stay together, there’s no telling where we could go. We’re at 3-3 and we haven’t shot the ball as nearly as well as we can.

“The defense part, we figured it out. We’re going to knock shots down. If everybody stays together and plays their role, there’s no telling where we could take it.”

Bohannon, a 6-foot-6, 230-pound forward, was a highly-recruited defensive end out of Lorain. He carries over that gritty, football mentality on the hardwood.

“We don’t get accolades for being the best scorer or anything like that,” Bohannon said. “We survive off toughness. That’s been my M.O.”