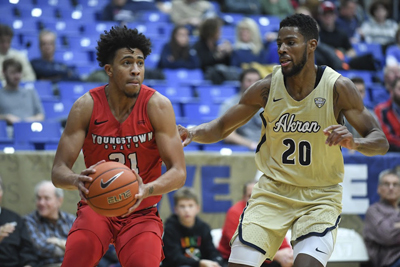 Correspondent photo / Robert Hayes Youngstown State’s Michael Akuckie, left, drives into the paint while being defended by Akron’s Xeyrius Williams during the second half at the James A. Rhodes Arena in Akron. The Zips won, 82-60.

Correspondent photo / Robert Hayes Youngstown State’s Michael Akuckie, left, drives into the paint while being defended by Akron’s Xeyrius Williams during the second half at the James A. Rhodes Arena in Akron. The Zips won, 82-60.

Correspondent photo / Robert Hayes Garrett Covington, right, takes a shot over Loren Cristian Jackson of Akron during the first half at the James A. Rhodes Arena in Akron.

AKRON — The University of Akron basketball team started off hot and didn’t lay off the gas.

Thanks to a 48.8 percent performance from the field, the Zips were able to cruise to an 82-60 victory over Youngstown State at the James A. Rhodes Arena in Akron.

YSU hasn’t won a contest against the Zips in the Rubber City since 1986.

“You know what, you got to tip your hat some nights in basketball (when) the other team is shooting the ball well,” he said. “I thought Akron, I said for about two days since we started getting ready for this scout, that if they make 3s, they’re as good as any mid-major team in the country. 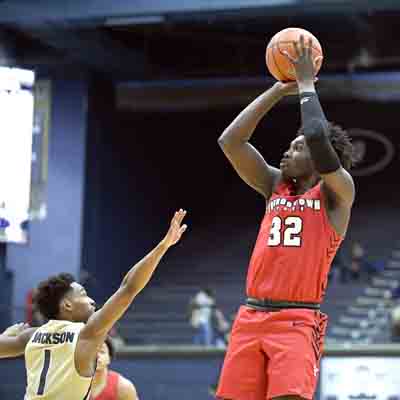 Correspondent photo / Robert Hayes Garrett Covington, right, takes a shot over Loren Cristian Jackson of Akron during the first half at the James A. Rhodes Arena in Akron.

“I truly belive that. They got one of the best point guards, they’ve got a really good four man that can stretch the defense, they’ve got a combo guard in Tyler Cheese that puts a lot of pressure on you, so if (Groce) can develop his bench, look out. They’re going to be really, really good.”

The game was the third in a series of four games that make up the Global Sports Shootout, an early-season exempt tournament that also includes Louisville, North Carolina Central and USC-Upstate.

“I thought we picked a bad night to play bad,” Calhoun said. “We were going to have to play really well to give ourselves a chance. Quick turnaround, you’re playing every other day, so Akron got what they wanted. They paid for three home games, they won all three of their home games. We got one home game and we won our home game. In our level of basketball, I don’t know if the fan really understands that.”

The Penguins, coming off of a 66-60 victory over NCCU on Tuesday night, have to leave today for USC-Upstate.

“It’s hard because you’re traveling, (and) you’re not at one site,” Calhoun said. “A lot of the bigger schools, they go to these nice places, and they stay at these places and they play back-to-back-to-backs. We did our first year in South Dakota, we decided on this one because it was a $150,000 payout, so they paid us a lot of money to go on the road three times. We had to do it in that regard, and then next year we’ll host one, but it is difficult because we’ve got to get on a plane at 11:30 (today) and then go play the next afternoon.” 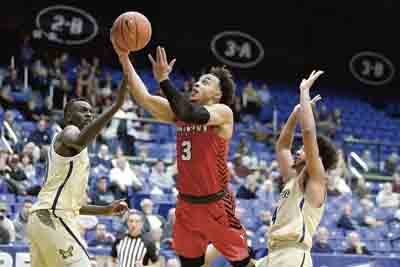 YSU fell behind early in the contest, when Akron (4-1) went on an early 10-2 run to start the ballgame. The Penguins cut the deficit down to five points when they trailed 17-12 midway though the first half.

Akron pulled ahead and carried a 43-25 lead going into halftime and eventually sailed to the 22-point victory.

Youngstown State out-rebounded the Zips, 42-40, but Calhoun doesn’t think having the advantage on the boards is always a good thing.

“Well when you miss a lot of shots, there’s going to be a lot of rebounds, so that’s a little bit of a stat that I don’t think anymore in basketball is that important,” Calhoun said. “If you make shots, you don’t have to rebound, so we missed a lot of shots. Everybody talks about rebounding, but what do you need to rebound if the ball goes in the basket, right? They made 13 3s, so there’s not a lot of rebounding opportunities (for them).”

Darius Quisenberry had a team-high 17 points on 7-of-15 shooting, and Groce had praise for the YSU guard.

“He’s talented” Groce said. “(He) really turned it on late last year, and if you look at their league stats, he was 45-plus from two, and 35-plus from 3. Shot a great percentage from the line, was close to 2:1 assist to turnovers. He’s a preseason All-League Horizon guy for a reason. Very good player, very competitive. I like him a lot.”