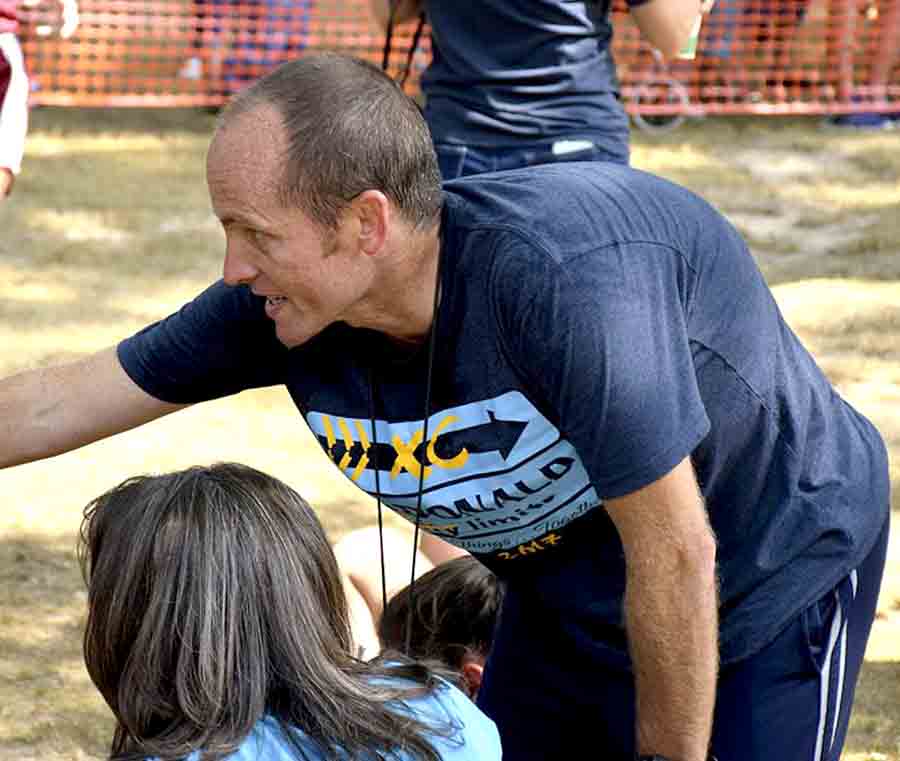 Mike Richards stood there with the large M with blue, yellow and white colors on his outfit.

All Caleb’s Maplewood High School team needed was the right places in order to finish in the top four of the Division III boys regional race. That would get the Rockets to the state cross country meet.

People looking at their phones kept hitting refresh to see the latest team results. But it was not the news Caleb or his teammates desired. They were two points from fourth place, thus no trip to state in the 2019 season.

Mike Richards was concentrating on his McDonald girls cross country team, which did advance to state. He said he wished he could have been there a bit more to console his son.

Mike coached the Blue Devils girls team since 2004, but 2019 was his last year with the team. A 1992 Maplewood graduate, Richards returned to coach the Rockets’ girls track and field team.

Mark Yoder stepped away from coaching track and field, which left an opening at Maplewood. Boys track coach Dave Deeter, a 1991 Maplewood graduate, talked Richards into returning to his alma mater.

“I decided to leave McDonald, first because of my kids,” said Richards, a middle school teacher at Canfield. “When we were at regionals this past year, this is when it hit me, when my son’s team missed going to state by two and my girls made it. Watching the Maplewood girls win, which was great. At the same time, I’m thinking I’m coaching McDonald, that’s the team I’m going to be coaching against. I can’t be sad for my son right now. That was my decision at that point.”

He and Deeter started their mentoring in the mid-1990s at Maplewood under former coach Ted Rupe for cross country and track.

This year’s track season for the girls would’ve been a fruitful one.

“I think the 4×800 had a shot at podium this year, too,” Richards said. “Mabel Crouch was coming on. They used her in sprints last year because they had a little more depth. We used her in indoor for the 800. They were looking really solid. I think we would’ve had a very good 4×400 and 4×800 this year.

The Maplewood girls had a three-year stretch (2009-11) when they placed no worse than seventh at the Division III girls state meet, placing third in 2010.

Michelle Rupe has coached the girls cross country team the last couple of years as the Rockets went back to state in 2017 and 2019 — winning the Boardman Regional title last season.

“The traditions are there,” Richards said. “The Rupes have kept that going. On the girls side, I think they all believe that’s for the boys. The boys have done that. If the girls have a super-talented team to do well. I’m trying to preach you’re the team that can always be there. That’s what I’m trying to build that a little bit.”

Caleigh, Richards’ daughter, will be a freshman next year for the Rockets — running cross country and track and field.

Mike tried to get to his daughter’s Suburban League races on Tuesdays, but that wasn’t always possible when he coached McDonald — being at different sites that day.

This coming season, Mike can watch his children run.

There’s a cheer you’ll hear from the Maplewood huddles of athletes wearing blue and white right before cross country races — 1-2-3, no pain.

It started when Richards ran his junior season and was to have major back surgery before a race in northern Ohio.

“I was going to surgery on a Monday,” he said. “I actually ran the race up in Kirtland, actually won the thing with broken bars in my back. I remember Ted and some of the guys saying, ‘If Richards can run with bars broken in his back, we can. There’s no pain we can’t go through.’ From that time forward, Ted instituted no pain.

“Now it’s going to be cool, I’m going to be there with my kids. They can tell that story. It almost brings me to tears they get to hear that.”