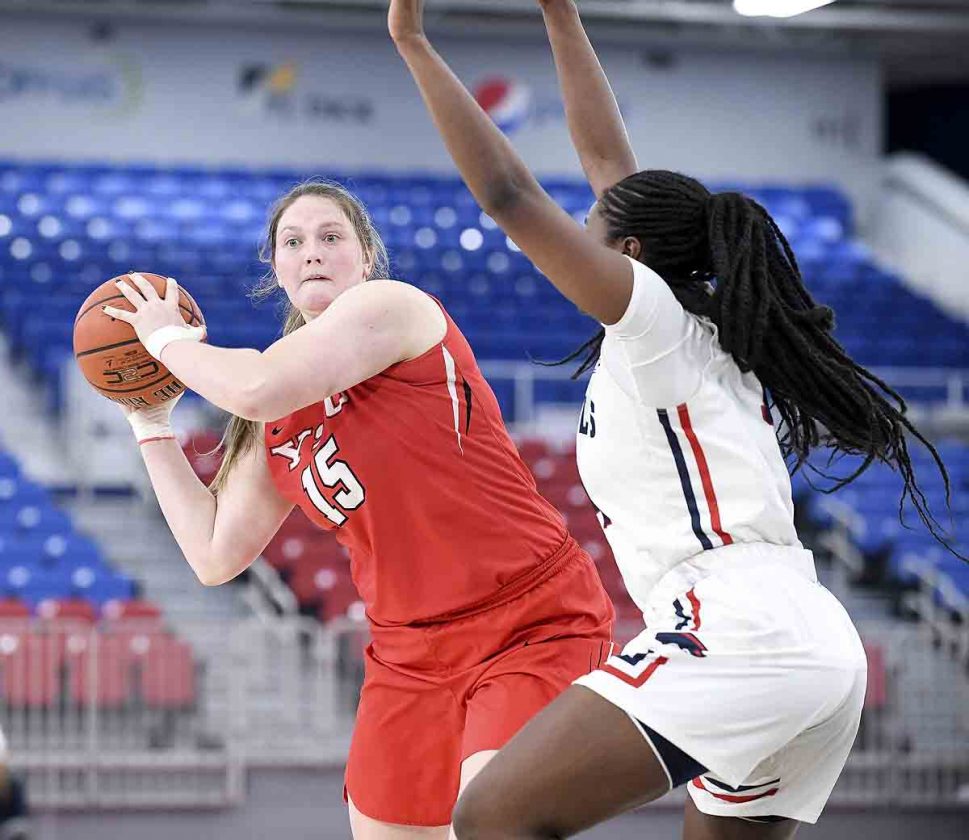 Correspondent file photo / Robert Hayes Mary Dunn, left, of Youngstown State has petitioned the NCAA for an injury redshirt season. If granted, she would be eligible to play for a sixth year after suffering a season-ending injury in the fourth game of the 2019-20 season.

Mary Dunn has been busy at her western Pennsylvania home. There’s a concrete surface in her backyard with a basketball hoop nearby. She’s shooting baskets with her brother (Michael) and father (Joseph).

She does sprints in front of her house. There’s a hill close to her home. It challenges the Youngstown State University women’s basketball player — something that didn’t get a chance to happen this past season, her senior season.

Dunn suffered a meniscus tear after scoring 30 points against Eastern Michigan in the Penguins’ fourth game of the season. She didn’t return the remainder of the 27 games.

Dunn and YSU are hoping to get a medical redshirt ruling from the NCAA, which would permit her to play a fifth season.

To get a medical redshirt, a player’s injury must be:

during one of the four years of college or during their senior season;

prior to the second half of the season;

before the player competes in more than 30 percent of the season or three contests — whichever is greater.

Dunn said her knee is feeling great and is back to 100 percent.

“I still haven’t got my medical redshirt approved yet,” Dunn said. “I’m not sure with the time period, with everything that’s going on.

“Without any unforeseen things, I should be getting approved.”

YSU went 13-17 last season and missed Dunn’s presence on the floor. The former Horizon League Freshman of the Year was an offensive impact for a Penguins team predicated on its interior game.

“It was pretty devastating to lose our only senior and captain,” YSU coach John Barnes said. “Especially, as everyone saw, such a big part of our team, scoring 30 points in her last game. She was averaging 17-18 points a game at that point. We were thankful it wasn’t something more serious like an ACL. It did cost her the season. Fortunately, she’s fully recovered.

“I’m excited for her to hopefully have a great senior year this year.”

Dunn is planning on coming back to school to start her master’s program in professional communications — a mix of marketing, communications and writing.

She could finish the program within a year and half and be closer to her Ph.D. Dunn wants to be a college professor.

“It’s working out,” she said. “I needed more schooling anyway.”

She’s looking forward to returning to YSU for the 2020-21 season when the Penguins’ front line is shaping up to be Dunn at 6-foot-3, Emma VanZanten (6-4), Jen Wendler (6-2) and Amara Chikwe (6-1). Dunn’s injury is chronicled. VanZanten was out most of the season with an ankle injury, while Chikwe had a season-long concussion. Wendler made plenty of strides as a freshman.

“It’s going to be a great year for our posts in the Horizon League,” Dunn said.

Having plenty of freshman play last season is a benefit to this Penguins team heading into 2020-21. When the team might be together is in question because of the COVID-19 pandemic.

“Although the circumstances are different, our goals and work ethic are not changing,” Dunn said. “We might be working out in different ways, but we’re still doing hard workouts — high intensity. We’re working with what we can because this season is a great season. Specifically, for me, I had all these goals for last year. I didn’t have the opportunity to do them. I feel that pushes me even farther.

“I had them taken away from me and I don’t want that to happen again. I think our team is hungry for that too. We got a lot of experience from the younger kids. The older players definitely grew a lot. We had people go into spots they weren’t playing before, which I think makes a difference.”

A denial of her medical redshirt application won’t be acceptable.

“I cannot be working this hard to get that answer,” Dunn said. “That would not be good.”