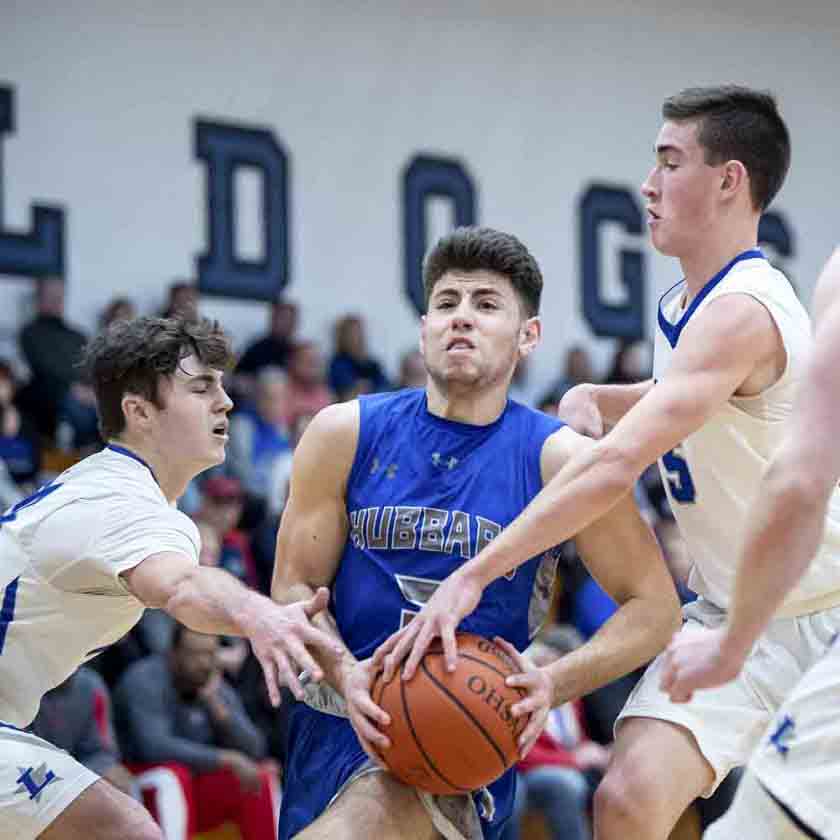 Out of all those players, there are very few that have left an impact on him like Hubbard High School senior Cam Resatar.

“There’s probably five kids that I can name that put the work in like he did, and he’s one of the five,” Bornemiss said. “You’re talking about a kid that played football. Then, after football practice, he would call the coaching staff to open the gym and do ball handling drills and shoot for an hour. Even when he was banged up later in the year with his ankle, he would still come in and do that continuously.”

Over the years, Resatar grew a reputation as a warrior, battling back from injuries and continuing to compete. He marks it down to being a worker.

“I’m a hard worker and when I see a goal, I always have to reach it,” Resatar said. “Whatever it takes, I’m going to do that.”

Resatar’s hard work over the last four seasons was rewarded in January as he reached the 1,000-point mark on the road against South Range. Resatar was coming off two strong performances against West Branch and Girard and was eager to score his 1,000th point.

“When I hit it, I had a huge sigh of relief,” he said. “I was so tense in warm-ups and pretty much the first half of that game. But after making it, that all went away.”

Resatar went on to finish that game with 25 points. He finished his senior season averaging 18.7 points per game, 81 rebounds and 82 assists.

Growing from a freshman to a senior, the main change Resatar saw was the speed of the game.

“Freshman year, the game was so fast,” he said. “It was tough picking up to speed, but by senior year everything slowed down and the pace was much more controllable.”

As he grew into an upperclassman, Resatar’s confidence as a leader grew.

“I was kind of more of just a lead-by-example type,” Resatar said. “I wasn’t scared to communicate, but I wasn’t sure if it was my place being a younger player. The past two years being a junior and senior, I was able to be a more vocal leader. I think that really helped me grow as a person.”

Looking back at his four years at Hubbard, Resatar recalled three memories that really left an impact on him. His 1,000-point shot, one from his freshman year in basketball and one from this past football season.

“First was when I was a freshman, I made a layup and the student section did the ‘He’s a freshman chant.’ That’ll definitely be a great memory,” Resatar said. “Then obviously, the 1,000-point shot, getting fouled — having all my friends and family that are watching it.

“Then in football, we played Howland in the second or third week of the season this year. It was third-and-2 in overtime and the coach called my number. I ran it in for the game winner.”

Going forward, Resatar plans to attend college to study civil engineering. Purdue or Miami of Ohio are two schools interested in him.

CLEVELAND — Myles Garrett on one end. Jadeveon Clowney on the other. Just the thought of it elicited a quick ...

Passion of Krivonak ‘pitched’ to others

Stephen Krivonak passed away earlier this month at the age of 74, and the man known as “Sheeny” spent his final ...

Baker Mayfield went back to his roots during this strange offseason, a time he’s used to reflect and forget a ...