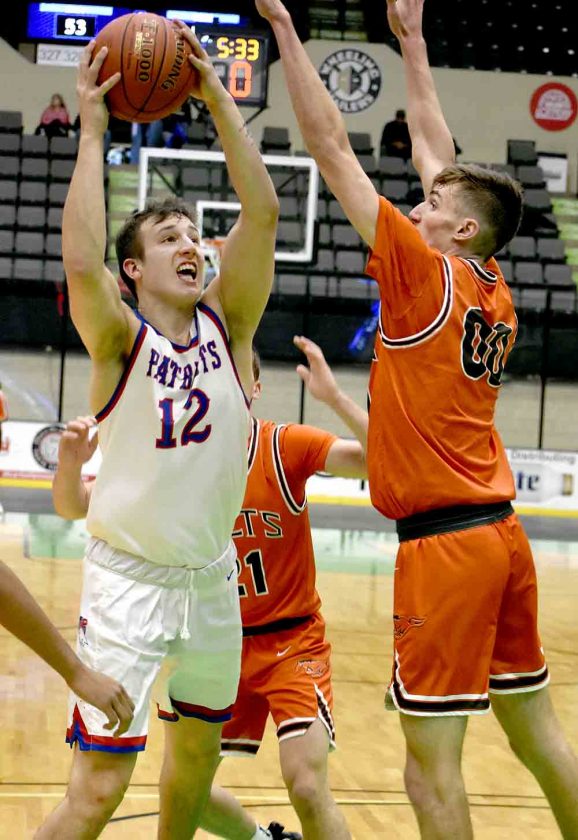 WHEELING, W. Va. — When it comes to hard work, Wheeling Park’s Alex Vargo personifies it. When he’s not practicing during a scheduled team practice or playing a game, he’s in the gym continuing to try to improve his skills.

His play during his tenure as a Patriot was impressive enough that Division I schools took notice. His goal since Day 1 was to play at the NCAA Division I level.

Vargo will be living his dream this coming winter as he verbally committed to Youngstown State to play for coach Jerrod Calhoun and the Penguins.

“I was very patiently waiting for an offer. It feels good not having to have to worry about where I’m going for the next four years,” Vargo said. “They recruited me really hard in the short of amount of time they recruited me.

“They started right before the start of our first game (this season). I love the coaches, I like the players and it’s not too far away from Wheeling, but it’s far enough. Just all those factors play a part.”

While it comes as no surprise, Vargo has high expectations of himself when he first steps foot on the court this coming winter.

“I don’t really know,” Vargo said. “I want to play right away. I think I’m capable of doing that and make an impact on the team. Win the conference and make it to the NCAA Tournament, that’s the biggest goal.”

The Penguins finished this season with an 18-15 overall record and had a solid 13-3 mark at home. It was their first winning season since the 2012-13 campaign.

“He deserves everything he gets,” Wheeling Park coach Michael Jebbia said. “He just put in that incredible amount time. When he was in sixth grade at Bridge Street, he caught the basketball bug there. It’s just incredible to see what he’s done the past five to six years. And then to top it off with the senior season he had. He’s going to leave Wheeling Park as one of the best ever. There’s no question about that.”

Vargo’s senior year was one to remember. In the Patriots’ second game of the season, he surpassed 1,000 points for his career, becoming the 17th Patriot to do so. He currently sits at 1,634 points, second all-time on the Wheeling Park scoring list. He is 17 points behind Jebbia (1,651) for the all-time leading scorer.

“I was a little over 30 points away going into our first game (this season). And then I had 28 points our first game. So, I was only a couple points away, so I kind of figured I’d get it our second game. It was cool and fun to get the crowd going and all that,” Vargo said about getting his 1,000th point.

Vargo also has the school record for free throws in a game, season and career.

On Jan. 30, against Parkersburg South, Vargo set a school record for most points in a game as he netted 53 in a victory.

One more accomplishment this year was more of a team one. For the first time since 2012, Vargo helped carry the Patriots to the West Virginia Class AAA state tournament after defeating Morgantown, 57-54, in the Region One Co-Final. Vargo hit a pullup jumper with 36 seconds left to give Wheeling Park the lead for good.

“It was great and felt really good,” Vargo said. “That was the goal all four years. We weren’t even close my freshman year. We could have had it last year, but we ran into a tough University team. This year, it was our time, but it got taken away.”

Unfortunately, the state tournament was put on hold because of the coronavirus (COVID-19) outbreak.

“Just an incredible career and really made strides every single year,” Jebbia said about Vargo. “You watched him his freshman year, he was just more of a shooter, then really developed into a player his sophomore year. He worked on everything he needed to work on to become a better player. All of our younger kids are seeing that they have a map and a blueprint of how he had a daily regimen of things he did every single day.”