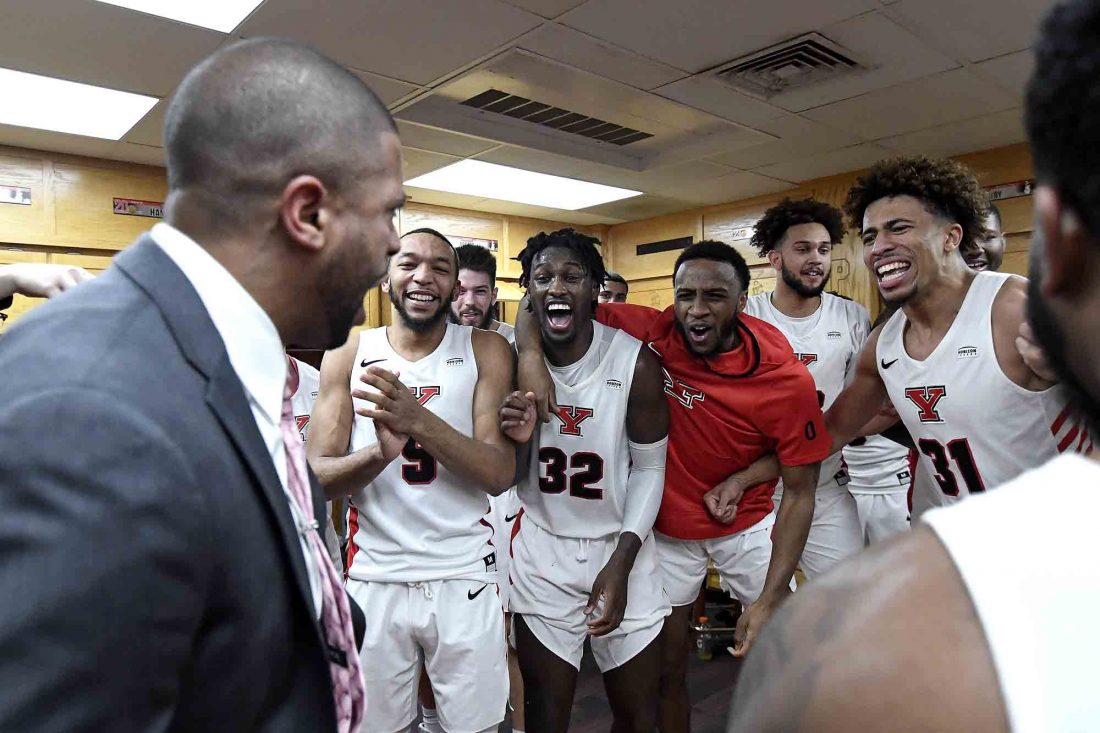 YOUNGSTOWN — The word overtime is slowly becoming synonymous with the Beeghly Center.

For the third straight day, the 48-year old gymnasium on the corner of Elm and what used to be Spring Street hosted a thrilling basketball game, although the result was in favor of the home team this time around.

To recap the weekend so far, the Youngstown State men’s basketball lost to Milwaukee in overtime on Thursday, with poor free-throw shooting being a catalyst in the disappointing defeat.

On Friday, the women’s team took Green Bay — a historic powerhouse in the Horizon League — into double-overtime despite only having nine healthy players, although the Penguins still fell short of winning.

The Green Bay men’s team rolled into Beeghly on Saturday, for what appeared to be an important game in Youngstown State’s season if the Penguins wanted to remain in the upper echelon of the Horizon League. 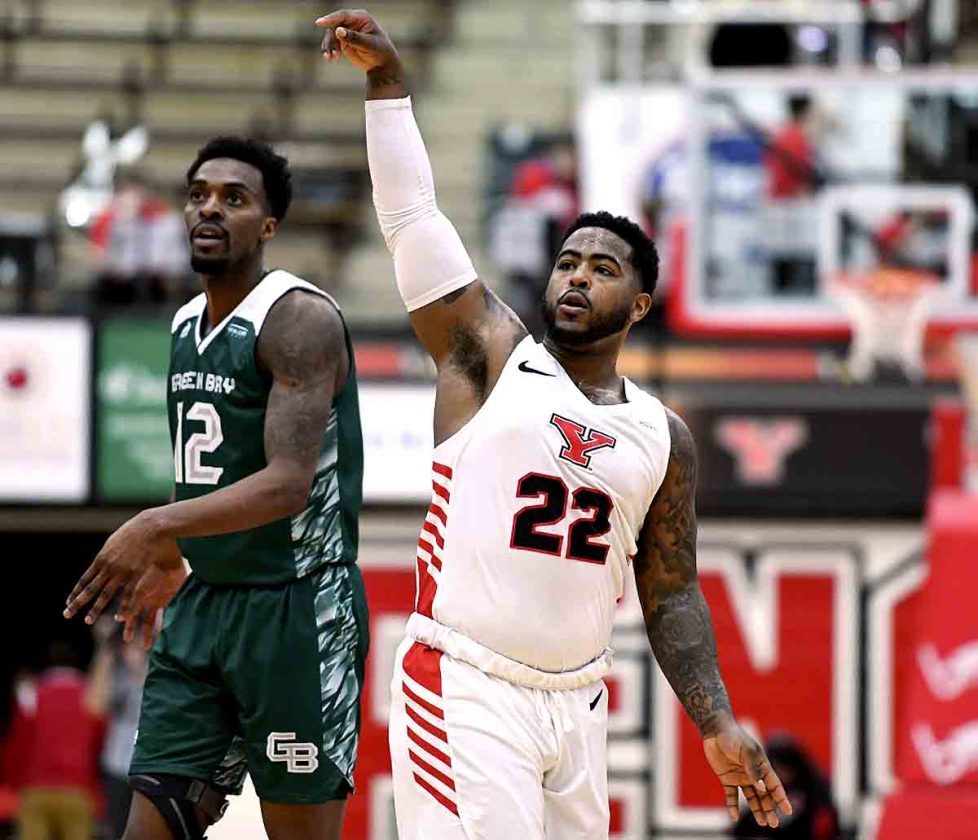 Correspondent photo / Robert Hayes YSU senior guard Devin Morgan, right, watches a 3-pointer fall during the second half. Morgan had a career day with a team-high 26 points, including six 3-pointers.

As it would turn out, the heartbreaking loss to Milwaukee on Thursday motivated YSU to come out stronger on Saturday and the Penguins walked off the court with a 98-94 overtime victory over the Phoenix — snapping a three-game losing streak.

Devin Morgan knocked down a 3-pointer with 50 seconds left in overtime to make it 92-89 in favor of YSU, but JayQuan McCloud retaliated with a 3-pointer for Green Bay to knot the score with 36 seconds left.

Darius Quisenberry converted a layup to give the Penguins a 94-92 lead with 11 seconds left, and that would prove to be the winning basket after Green Bay committed an untimely turnover on the inbounds play.

Quisenberry scored 24 points in the contest.

“I’m really happy for the kids that we were able to pull this one out,” Calhoun said. “The other night, there were nine different ways to win that game. I told them yesterday, ‘that game is in the past; let’s move on from it.’ 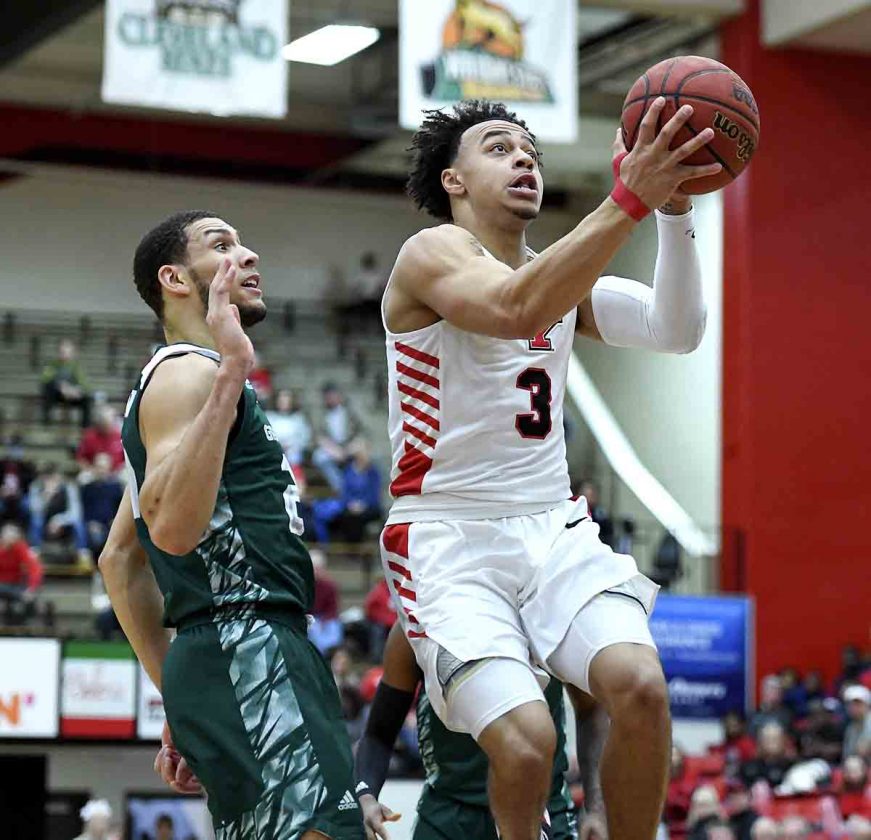 “We’re not going to sit around here in Youngstown and feel sorry for ourselves. I told them there’s going to be a whole bunch of people coming into this building and want to see what type of people we are. How are we going to react when times get tough? At the end of the day we stood together, stuck together and stood by one another, and good things will happen if you do that.”

Quisenberry felt the Penguins were battle-tested following their loss on Thursday.

“We talked about it,” he said. “Just that loss … I think that stunned a lot of us because we lost that game for ourselves. We gave that one away, and I think that one hurt us a lot and that was overtime, too.

“I think that loss (on Thursday) really triggered something in everybody on the team and I think we’re really going to be locked in the rest of the season and battle-tested from that loss.”

Morgan had a big afternoon for the Penguins with a season-high 26 points, along with a career-high six 3-pointers.

“I’ve been getting a lot of work in and my teammates have been keeping my head up,” Morgan said. “Coaches called my number today and I was just ready. I’ve been struggling a lot from the field, missing a lot of shots that I usually make. Like I said, I got a great workout in with (YSU associate head coach coach Jason Slay) this morning before the game.

“I was real locked in. I wasn’t joking a lot, and my teammates found me in great spots. I got a lot of step-in shots, and I thought maybe after one or two the basket got a little wider, so the confidence got higher.”

YSU is no stranger to close games, as their wins against Oakland and Detroit both came down to the final possession during their last homestand.

Penguins head coach Jerrod Calhoun feels the adversity his team has faced this season is going to pay off from a developmental standpoint.

“I think anytime you can get in the trenches like this the last 48 hours, it’s only going to make you better down the stretch,” he said. “We battle-tested ourselves in the non-league games, obviously playing West Virginia and Louisville.

“But, you can never simulate all those situations. There are a lot of situations, player-wise, that they had to think on the spot, and coaching-wise, where we had to make adjustments.”

The Penguins were down by 11 points with 8:36 left in the second half. They also had to overcome another slow start as they only scored two points in nearly the first 4 minutes of the game.

YSU held a 41-39 after the first 20 minutes, which was its first halftime lead since Jan. 11 against Detroit Mercy.

Quisenberry made a layup with 19 seconds left in regulation to tie the game at 81 and JayQuan McCloud missed a mid-range jumper with time expiring to send the game into overtime.

Garrett Covington saw action off the bench after missing Thursday’s game due to a “coach’s decision.” He gave YSU 13 points along with six rebounds.

“I thought Garrett Covington was spectacular on both sides of the ball,” Calhoun said. “He ended with 13 and 6 (assists), and did a tremendous job of cutting.”

Morgan felt he has great chemistry with Quisenberry on offense.

“We think that we’re two of the best guards in the conference, so we feed off each other down the stretch,” Morgan said. “It’s not like ‘get me a shot’ or ‘get him a shot.’ It was more so just making the right play.

“Having the confidence in our team that they’re going to make a shot. … He hit a big three in the corner and he came down and kicked it to me in the corner. He made a great pass to Mike (Akuchie) down the stretch, so it was just passing the ball and everybody getting touches, everybody playing with confidence. We all know we can score the ball, so it was electric out there.”

The Penguins beat UIC earlier this season, 70-64 in Chicago.