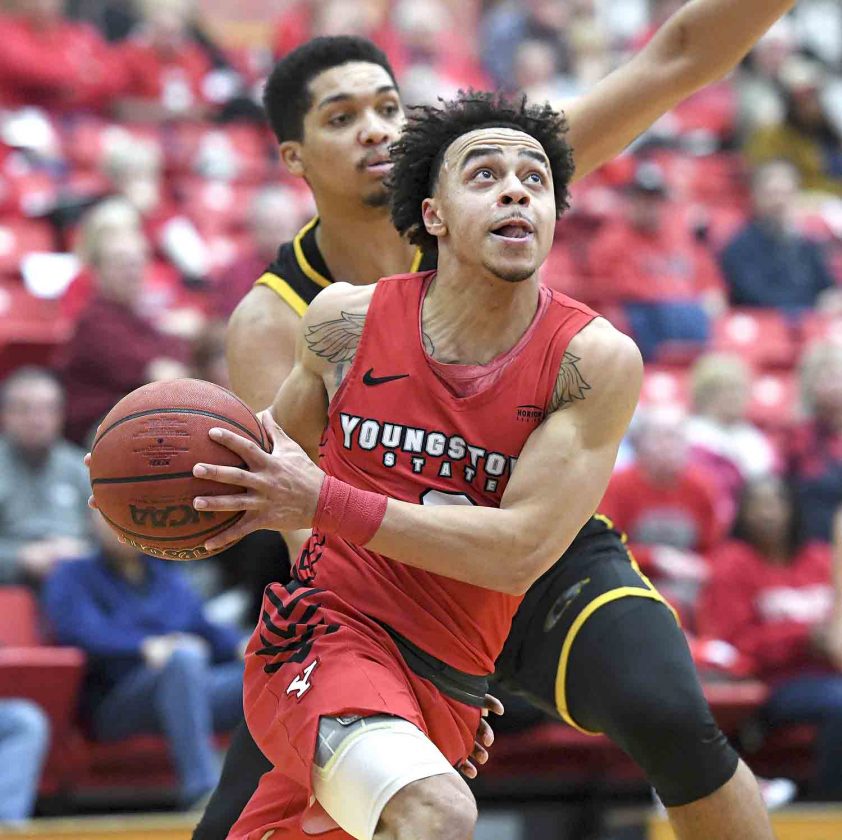 Correspondent photo / Robert Hayes Darius Quisenberry of Youngstown State drives toward the basket in the Penguins’ overtime loss to Milwaukee.

YOUNGSTOWN — Donel Cathcart made a 3-pointer with 5:15 remaining in regulation, watching as it hit nothing but net. His arm was extended and wrist snapped after the shot. He finished with a team-high 19 points.

The bucket gave Youngstown State a six-point lead, one the Penguins could not extend from that point forward.

YSU lost the game at the charity stripe, missing 14 free throws in Thursday’s 75-73 loss to Milwaukee in overtime.

“It’s hard to beat anybody, home or away, when you miss 14 free throws,” said YSU coach Jerrod Calhoun, whose team has lost three straight. “We get up four or five and we could stretch it to six or seven. It’s been a problem for two years. The reality of it is it’s been a glaring problem the past two years. That line hasn’t changed, by the way (unlike the 3-point stripe). Those percentages should be up.” 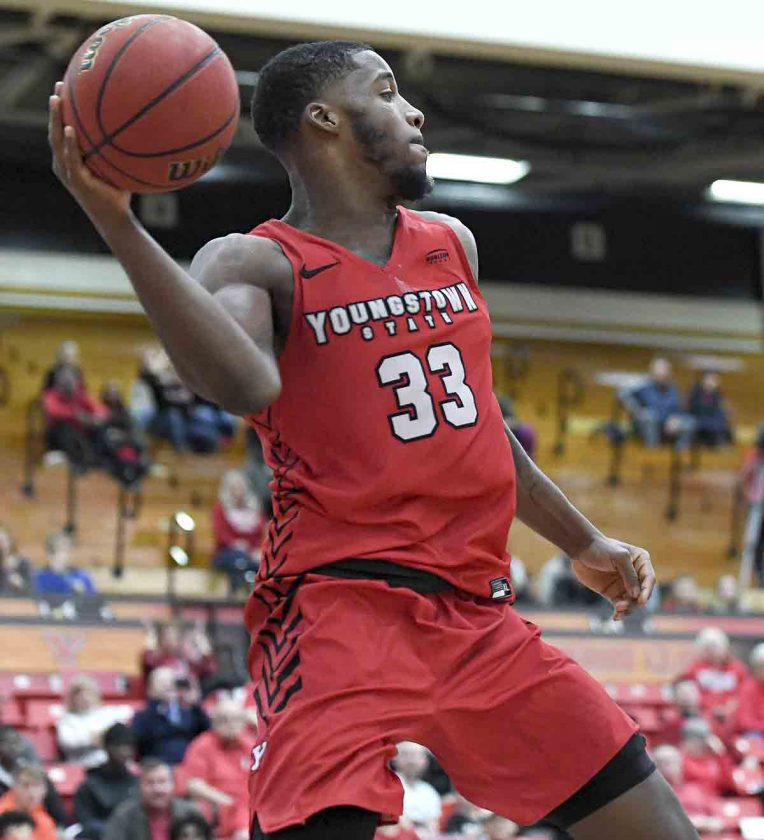 Correspondent photo / Robert Hayes Naz Bohannon of Youngstown State saves the ball from going out of bounds late in the second half in the Penguins’ overtime loss to Milwaukee on Thursday at the Beeghly Center.

Milwaukee took a 73-71 lead with 29 seconds remaining on DeAndre Abram’s jumper. He had 19 points. The Panthers were 2 of 4 from the line down the stretch and YSU had a last opportunity with less than 4 seconds remaining. Darius Quisenberry, who had 17 points, was heavily guarded by the Panthers. The YSU sophomore guard already made a game-winner by going the length of the floor against Oakland earlier this month.

But this time YSU’s Michael Akuchie was forced to take a 30-footer at the buzzer, missing the potential game-winner as time expired.

Free throw shooting would’ve made a difference for YSU Thursday.

“We work on them every day,” said YSU’s Naz Bohannon, who had 17 points. “To come in here and miss 14 free throws is highly unexpected. We can’t expect to win the game missing 14 free throws, especially down the stretch when we have a chance to stretch the lead.”

YSU was down 42-32 at halftime as Milwaukee was playing the way the Penguins started the Horizon League season, with tightly contested defense, getting second and third opportunities at the basket and driving toward the hoop. Milwaukee outrebounded YSU 45-43 and had a 16-12 edge in offensive rebounds. YSU was outscored 38-32 in the paint. 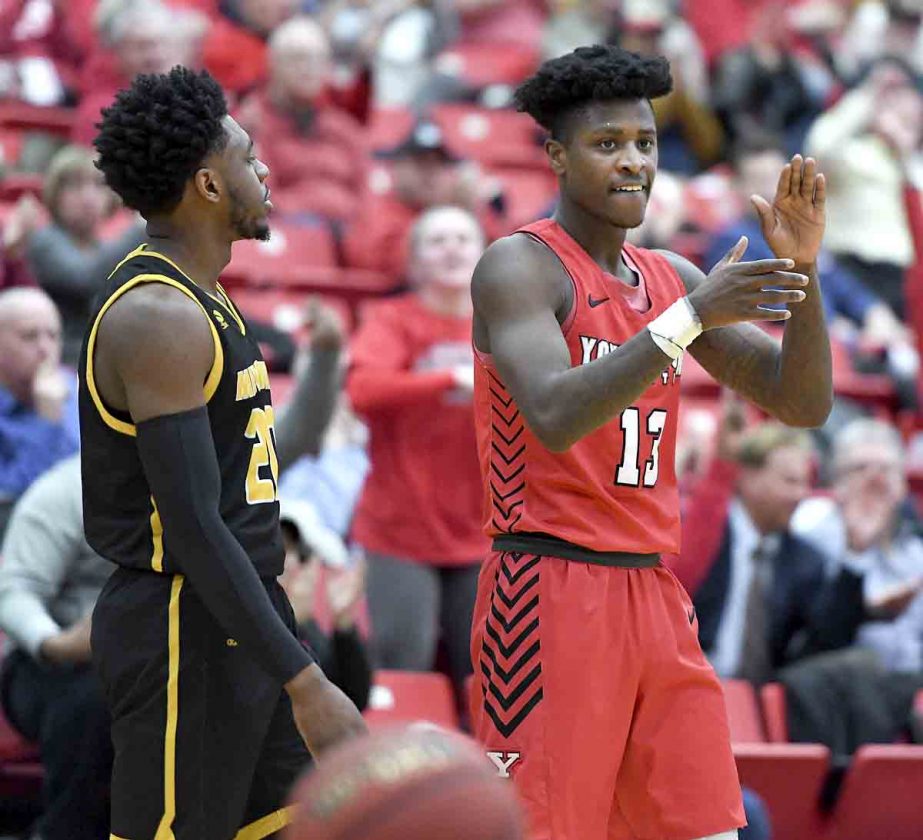 “It’s cost us a couple of games to be honest with you,” Calhoun said of his team’s lack of rebounding. “You’ve got to give Milwaukee credit. They’re scrappy, tough. I told our guys the last three days, they’re similar to us. That’s why we had the same record coming in. They beat us to balls.”

Akuchie and Bohannon were instrumental in the Penguins’ second-half comeback as YSU went on a 16-4 run to start the half. YSU started to get some of those second and third chances on possessions it didn’t see in the first half. Akuchie had nine points and nine rebounds.

“It wasn’t about Xs and Os,” said Bohannon after the first game of a five-game homestand. “We looked at each other in the face and said we have to do what we do. When we broke the huddle right when we came out, we said, ‘heart.’ It wasn’t defense, offense, none of that. We played with heart and that’s what we did.”

YSU is currently tied for fifth with UIC, which lost to the Penguins earlier this season. YSU hosts Green Bay Saturday at 2 p.m.

“I tell these guys every day, we’re all about equal,” Calhoun said. “You’ve got to prepare really good. You’ve got to lock in on every possession. They’re all going to the wire. If you like basketball and you like the excitement of close games, then you should come to Beeghly Center and watch.

“We’ve seen a lot already. There’s a lot of games left. Now we lost a close one. It hurts. I think our guys understand you only get so many opportunities. You’re down to 10 games. Can we respond? Absolutely. We’ve responded all year.”

OUT OF ACTION: YSU sophomore Jelani Simmons made the start for junior Garrett Covington, who did not play against Milwaukee Thursday.

Cathcart had to step up for Covington, who is usually the team’s top defender.

“He didn’t live up to the standard of the program,” Calhoun said. “There’s standards that are being put in place here. I played the guys that I thought were going to help us win the game. I thought Zoomi (Cathcart) was phenomenal. It was a coach’s decision. I’ll sub the guys I want in the game and guys who I think will give us the best shot to win. That’s the reality of it. That’s what I get paid to do.”

Donna Houston knew her husband’s mind was deteriorating when the college football Hall of Famer and Cleveland ...

More than meets the eye

There’s a man jumping around on the sidelines, yelling at one official — OK, maybe all three — on the floor. ...