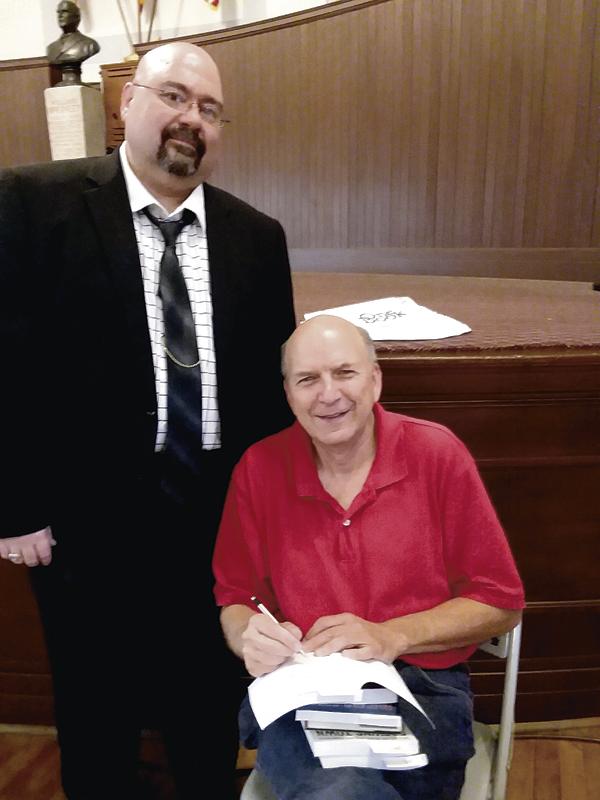 NILES — One thing that Terry Pluto has an abundance of is faith. Something else he has in abundance is stories.

Pluto, a sports columnist for the Cleveland Plain Dealer since 2007, discussed his long career at the paper by sharing anecdotes with the nearly 50 people attending his presentation Wednesday at the McKinley Memorial Auditorium.

His talk was accented by a book signing at the end. And it wasn’t the first time many of his fans came to one of his presentations.

“This is the fourth time I’ve seen him,” Gary Smith of Niles said. “I like his views on faith, and I follow Cleveland sports teams.”

Smith also said he’s read several of Pluto’s books, including “The Curse of Rocky Colavito: A Loving Look at a Thirty-Year Slump.”

This curse supposedly prevented the Cleveland Indians from winning championship games when popular right-fielder Rocky Colavito was traded to the Detroit Tigers. The book was selected by the New York Times as one of the five notable sports books of 1989.

His book, “Loose Balls,” was ranked No. 13 on Sports Illustrated’s list of the top 100 sports books of all time. He’s written at least 20 sports books and four religious ones.

The writer opened up to his audience by discussing his father’s death and how it changed his life.

“My faith came to me in the middle of 1995, when I realized my father was not going to get better,” Pluto said. “I started asking myself if I could find a better way to live. I concluded life’s going to be hard either way; either you’re going to do it with God or without Him.”

Pluto also connected with his audience by handing out fliers, asking them to be part of his next book about the Cleveland Cavaliers from the 1970s through the 1990s.

The writer also visits the Summit County Jail weekly. He said he tries to be positive when he goes to the jail.

“If we’re not sure which way to go, choose to be positive,” he recommended.

Pluto is an award-winning journalist. He was honored twice by the Associated Press Sports Editors as the nation’s top sports columnist for medium-sized newspapers. He is a nine-time winner of the Ohio Sports Writer of the Year award and has received more than 50 state and local writing awards. In 2005, he was inducted into the Cleveland Journalism Hall of Fame.

For more information about Pluto’s career, visit his website.

GOODYEAR, Arizona — The Cleveland Indians could have another significant pitching problem. Right-hander Carlos ...