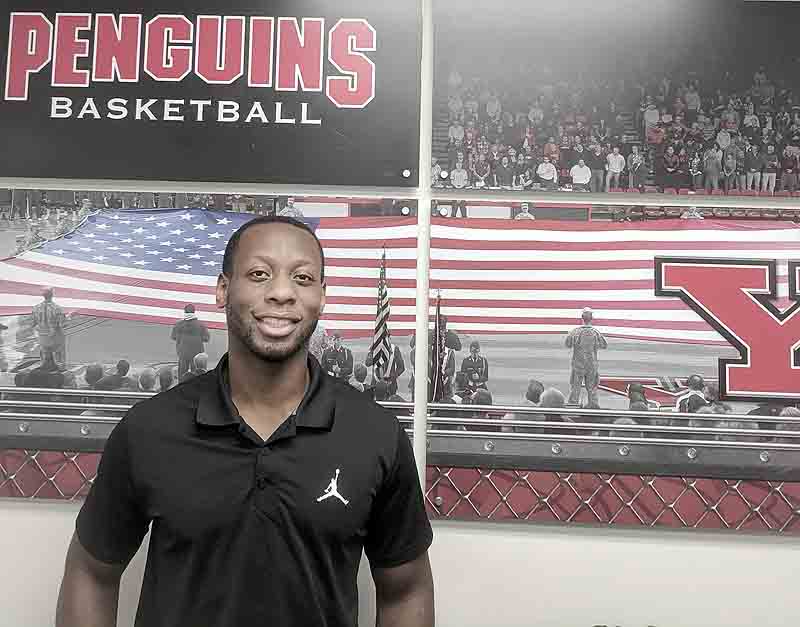 Rarely has the 31-year-old worked outside of his home state, coaching young men in the sport he loves — basketball.

Nwachukwu, a Ypsilanti, Michigan, native, did have that brief trip to Ohio as he spent two years as a junior varsity coach for the University of Findlay — smack dab in Ohio State country. It was after earning his degree from the University of Michigan. He heard about the the Wolverines’ shortcomings, especially when it came to playing its long-time rival.

Now, he replaces Brady Trenkle, who left the Penguins to pursue opportunities close to his family in Idaho, as an assistant coach for the Youngstown State University men’s basketball team. Nwachukwu’s ultimate boss is YSU President Jim Tressel, who had an 8-1 record against Michigan in his time as OSU’s football coach in the 2000s.

“I haven’t met President Tressel, yet,” Nwachukwu said. “He barely ever lost to Michigan. I don’t have any room to talk trash. Hopefully we can get it going this year.

After all, Nwachukwu is a Michigan man. He remembered the lessons he learned under new Cleveland Cavaliers coach John Beilein, when he was the Wolverines coach.

Staying with the basics. That’s what made Michigan a winner in college basketball as Beilein’s teams reached two of the last seven national championships.

How did the Wolverines become one of better teams in the country? Consistency.

“That’s an everyday process,” Nwachukwu said. “There’s little notches every, single time. You got to keep doing the same thing every single day. You don’t want to extraordinary. You need to do the ordinary things extraordinary.

“That’s the difference. If you do the ordinary things very well, you have a great program.”

Penguins assistant coach Jason Slay reached out to Nwachukwu, hoping he was interested in the opening.

Calhoun talked to Beilein, who spoke highly of Nwachukwu.

“He has a reputation of being a grinder, young guy that’s going to be a superstar in the business,” Calhoun said of his new assistant.

Calhoun has been aware of Nwachukwu, seeing Nwachukwu on the recruiting trails as a NCAA Division II assistant coach at Saginaw Valley State (Mich.) University, before heading to Michigan as the Wolverines’ Director of Player Personnel the last two seasons.

Calhoun saw the attention to detail in his precise wording, capturing his audience of young men on the Beeghly Center floor.

“You can tell the first couple days he’s been with us the attention to detail is very, very sharp,” Calhoun said. “He’s a teacher. He’s a great communicator. I think he’s going to add so much to the nucleus of our staff and our overall offensive side of the ball.”

Nwachukwu played for Father Gabriel Richard High School (Michigan) in 2006, playing for current Pfeiffer University (N.C.) coach Pete Schoch. Playing at college was an option only at a lower level than Division I. Nwachukwu’s grades dictated he’d concentrate on his education, heading to nearby Michigan. He started coaching locally, but yearned to be part of the collegiate level. If not playing, coaching was his option.

Nwachukwu graduated from Michigan in 2010 with a degree in economics, but the education he learned on the court was much more valuable.

It started with a local 19-year-old approaching the new Michigan coach. Beilein, who came to the Wolverines in 2007, up from the ranks more than most. His path started in 1975 at Newfane (N.Y.) High School through community college, Division III, Division II and, finally to Division I basketball.

Beilein drew from a plethora of sources on his journey, Nwachukwu was the benefactor as a student manager — increasing his basketball IQ.

Before heading back to Michigan for his second turn on Beilein’s staff, he was on staff at Milwaukee with then coach LaVall Jordan, who is now at Butler. Nwachukwu was the team’s director of operations. The Panthers, as a 10 seed, made the Horizon League Championship game in 2017 despite an 11-24 mark.

Winning is something he did from 2012-16 at Saginaw Valley State, as the Cardinals turned a 21-30 record his first two seasons to 46-17 his final two.

Success has followed Nwachukwu, especially since he’s been a Michigan man and learned the lessons from Beilein.

“I’ve learned a lot from him so far,” Calhoun said. “I think it’s always good to surround yourself with guys that bring some new ideas. Any time you can hire a guy from John Beilein that worked under him, you’ve hit a home run. I feel that way about Chin.”

The new YSU assistant hopes to leave his mark in Youngstown, just as he’s done so many places.

“If you want to impact people, leave an impact on the world,” Nwachukwu said. “As a coach, you can do it with six degrees of separation. If I coach a young man, he becomes a better person. He coaches someone else, fathers them. You can impact the world that way.

“That’s a big reason I coach.”

The course Jack Nicklaus built is getting golf’s version of a doubleheader. The PGA Tour has reached an ...

PITTSBURGH — James Conner didn’t treat the quarantine caused by the COVID-19 pandemic as an obstacle, but an ...