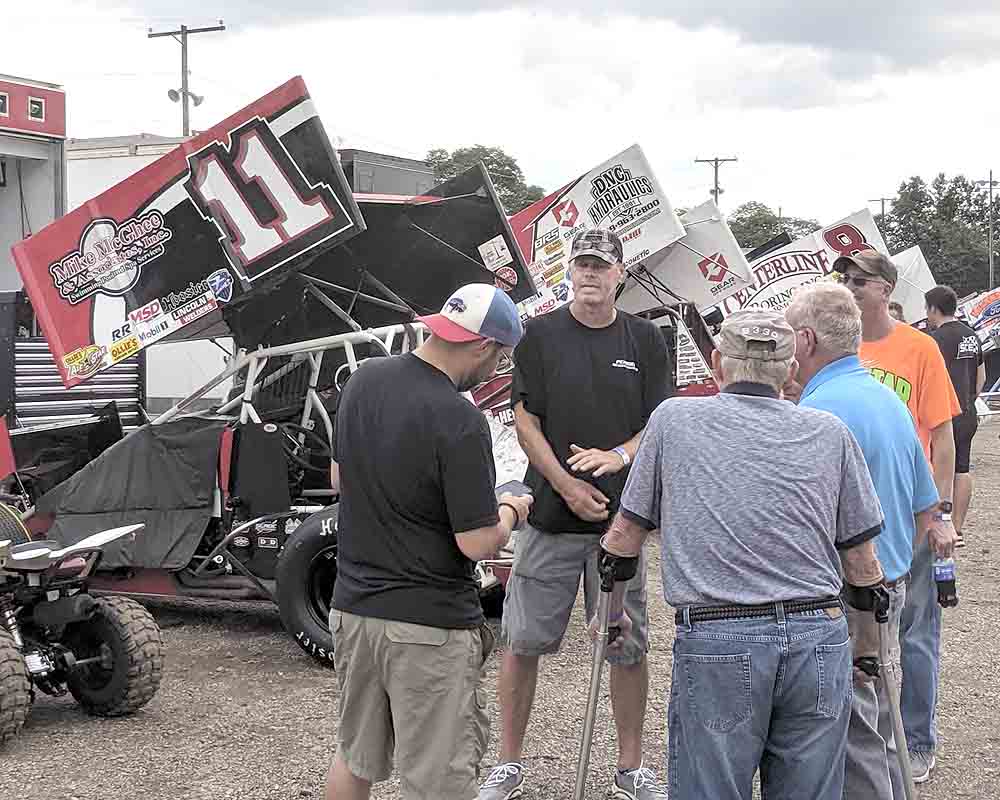 Tribune Chronicle / John Vargo Dale Blaney, center, talks to a group of people prior to Saturday’s Lou Blaney Memorial at Sharon Speedway. Lou, a legendary dirt-track racer, had his sons, Dave and Dale, learn the family trade by watching and listening.

HARTFORD — Lou Blaney was a man of few words. Action was more apropos for the dirt-track legend.

His sons, Dave and Dale, were enthralled by the sprint cars and modifieds Lou ran on a weekly basis — amassing more than 600 victories.

There were no pep talks or sage advice, that wasn’t Lou’s style.

Kate, Lou’s wife, sees the aggressive and competitive nature Lou had when he left others in the dirt and dust at Sharon Speedway and other tracks.

“He didn’t share much of how to race,” Kate said of Lou’s relationship to his boys. “He said you’ll find out when you’re out there racing. 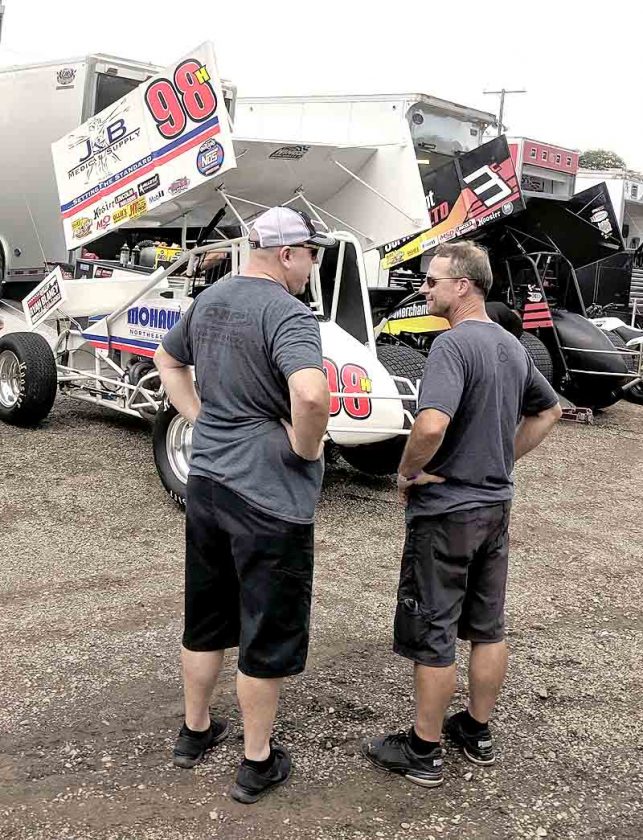 “They watched, and they listened.”

Fans made their way into Saturday’s Lou Blaney Memorial at Sharon Speedway, honoring the man who died of Alzheimer’s disease in 2009.

They watched Saturday’s 11th-annual event as the fans in the grandstands listened to the All-Star Circuit of Champions Sprint Cars and Mod Tour Big-Block Modifieds roar around the 3/8-mile dirt track. Dirt flew off the track, pelting anyone near the fencing of the track with hard-hitting chunks of mud.

There was Dale, coming out of his trailer. He wrapped an arm around his white helmet which had those dirt specks affixed to the protective head gear. He had a spray bottle of cleaner in the other hand.

Dale looked up from his cleaning detail in the Sharon Speedway pit area when asked why racing is still fun for him. He’s spent his career chasing around other sprint cars, mostly leading the pack around those unstable surfaces.

“Who said it was fun?” the 55-year-old Badger High School graduate deadpanned. “It’s all that we’ve done. Competition is competition. I still feel like I want to go out there and try to compete and beat guys. That’s what makes it fun.

“It’s changed a lot. Everybody’s mentality changes when they get older, but I still feel like I can do it. Some days aren’t fun. The fun days do make up for it. It’s just what we do.”

Dave, a former NASCAR driver, went back to his sprint cars roots in 2016. Retirement was not an option for the 56-year-old driver and fellow Badger High School graduate.

He, like Dale, watched and listened to Lou. It’s what he’s known.

How it feels behind the wheel isn’t discussed, it’s learned.

“He’s the best teacher we could have, as far as watching his work ethic was incredible,” Dave said. “I don’t know if we realized how good it was to be watching him all the time. You learned a lot.”

Ryan, Dave’s son, is one of NASCAR’s best and more popular drivers. He grew up in North Carolina, occasionally coming to Sharon Speedway, a facility his family owns.

Ryan started racing when he was 9 and by age 14 he was running three to four different types of cars. Lou didn’t offer advice when Ryan first started. You learned by osmosis.

Dave was more involved with Ryan, making sure he understood the basics.

“It was fun and frustrating,” Kate said. “It was terribly frustrating for David. He told him a lot of things. He wasn’t wise enough to say, ‘Ryan, watch what I have done.’ That’s what Lou understood, watch and listen.

“David was there telling him a lot of things and that was great. He was more frustrated than Lou was.”

Dave was a dogged competitor, bound and determined to win at all costs, forever attracted to the rebuilt vehicle, the burning rubber around an oval track and flying dirt he currently experiences as the winged sprint cars whirl around the track.

Dale’s interests go from golf to coaching and his love of basketball, just to name a few. He was one of the best players to come out of this area and continued his passion at West Virginia University. Dale was drafted by the Los Angeles Lakers in 1986, but walked away from the game before the start of his rookie year. Racing, not basketball, was his calling.

“Dale loves the game of basketball, the whole game,” Kate said. “When he got out there, it was no longer a game. It was a profession. It was his job. I think that’s what he was not ready for, I really don’t.

He likes to see the whole game.”

She said he’ll help out the Westminster College men’s basketball team, coached by his friend Kevin Siroki, this winter.

Anything Dale does, he desires to be the best — like his father. The great athletes learn from the legends, they carefully study their games and try to emulate.

“It’s way more fun than if he would’ve been a dentist. I’m glad and fortunate. Everybody is put in certain spots in life. Life happens and things happen for a reason. That’s why we’re racing.”

There’s a reason why Lou was a racing legend, continuing to attract the dirt track’s best to Sharon Speedway for this 11th year for the Lou Blaney Memorial.

“He won races in the shop Monday though Thursday by working and outworking everybody,” Dale said. “He had the talent to win races like no other had talent. He had both. His work ethic was second to none, and his talent was second to none. If you have those two things combined, you’re pretty good.

“We just learned by watching him. We saw his desire and that’s what we wanted to do too.”