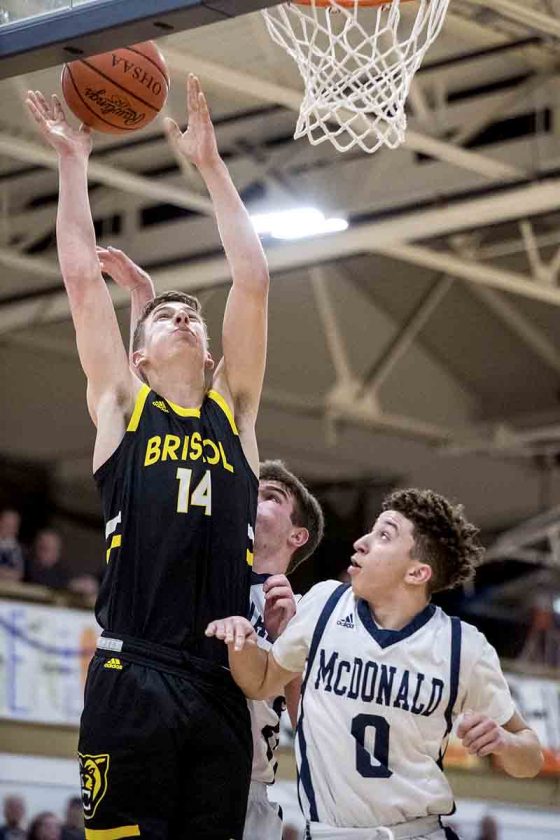 The area’s top two Division IV boys basketball teams locked horns when Bristol visited McDonald on Tuesday. The Panthers jumped out to a big lead before the Blue Devils came storming back for a 83-71 victory behind a total team effort.

“It was a classic small-school battle,” Bristol coach Craig Giesy said. “It was two teams that put a lot of time in. We had a good first half. We did a good job of taking Zach (Rasile) out for the most part. Our game plan was to double him and make somebody else beat us. In the second half, we got sped up both offensively and defensively. It snow balled into a couple of their role players making big shots.”

Those “role players” were outstanding for McDonald. After not scoring a point for the first three quarters, Eli Street (14 points) drained four 3-pointers in the fourth quarter to helåp secure the victory.

“Coach told me to be strong with the ball and be confident in my shot,” Street said. “I didn’t have confidence in the first half. The corner is usually my shot. I sat there. They didn’t come up on me, and I let them fly. We struggled in the first half and worked really hard for the victory.” 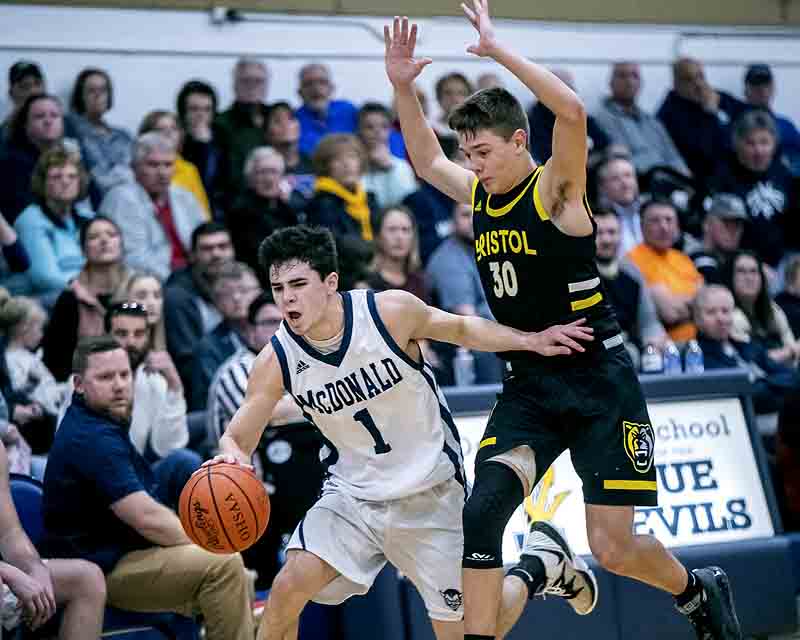 After Bristol took a 19-18 lead into the second quarter, the Devils were without Jake Portolese, who had to sit with foul trouble. The Panthers took advantage of McDonald’s big man being absent and built a 37-22 lead after a huge dunk from Matt Church (game-high 27 points). Nick Church scored 12 of his 17 points in the second quarter. His 3-pointer, just before the buzzer, helped Bristol go up 46-32 at halftime.

Portolese (17 points) returned in the third, and the game shifted dramatically. He immediately canned a pair from downtown, and the Devils were back in business. Now, trailing by 3, senior Parker Higgins stepped up and made an awesome play for McDonald. He stripped the ball, took the contact and finished. Higgins (10 points) then hit the free throw to tie the game.

“I work hard on the press,” Higgins said. “Sometimes, it pays off. That was a big play that really helped the team out. We really got some guts and went at it in the second half. We worked hard and some shots started to fall. We’re ready. We’re going to be the best Division IV team out there.”

McDonald outscored Bristol, 25-7, in the third. Dominic Carkido (14 points) hit a 3 at the buzzer to give the Devils a 57-53 lead heading to the fourth, which drew a standing ovation from the McDonald fans.

The Panthers weren’t finished. Mike Wiebe began the fourth with a block. Matt Church had another slam dunk, and Bristol trailed 67-60 with 4 minutes to go. Street then caught fire, and Bristol didn’t have an answer as McDonald pulled away. Jake Erjavec and Jeremy Miller did a good job of harassing Zach Rasile on defense as he finished with 25 points for McDonald. 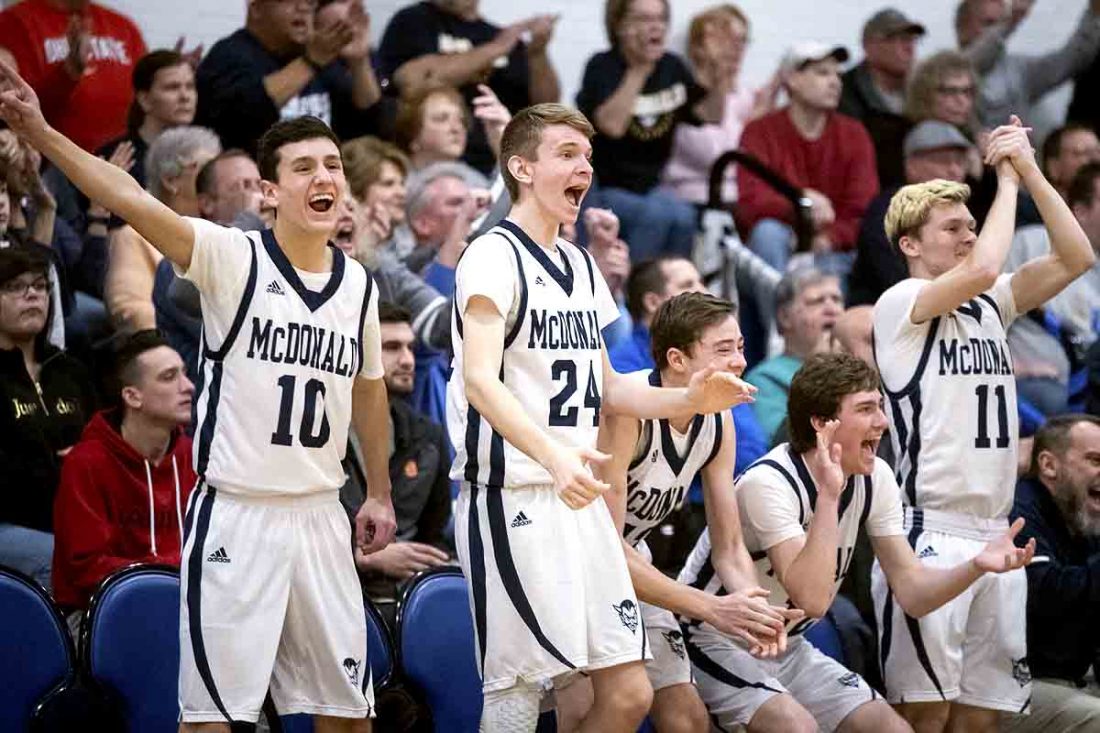 Rasile, who broke the state record for 3-pointers made in a season as a freshman, is now the all-time leading scorer in Trumbull County history with 2,623 career points. He is 23 points behind LeBron James for fifth place in Ohio high school basketball history.

“My wife and I talked when he started playing as a freshman,” McDonald coach Jeff Rasile said. “We could have saw him scoring six points a game. He averaged 21. That obviously put him on a path to success. He’s put a lot of time in since he was a little kid. We thought maybe he could score 1,000 points for his career. Well, he’s on the verge of scoring 3,000. The kid can play.

“Obviously their game plan was to double and triple team Zach wherever he went. The first half, we did not make them pay. I think we had five guys in double figures tonight. The second half, we made a lot of shots.”