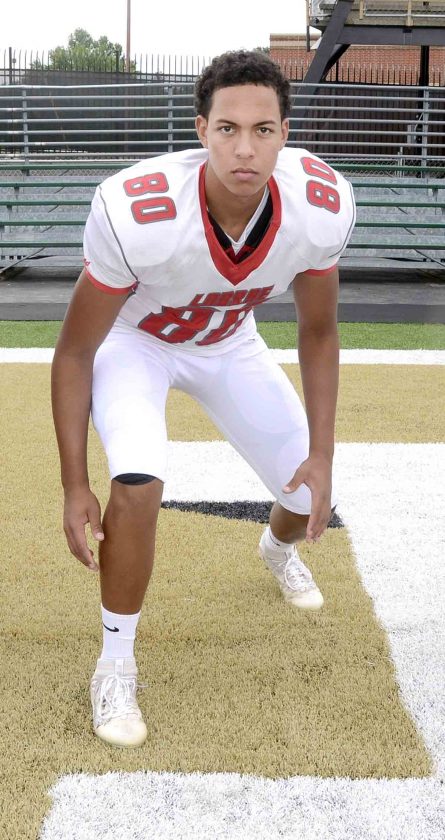 WARREN — It was always easy to spot Tyler Stephens as a kid playing sports.

The soon-to-be Division I college tight end wasn’t dunking at the age of 13 or catching touchdowns overtop defenders in junior high. Not even close.

Husky and clumsy, the recent LaBrae High School graduate was falling over his own feet and scratching his head after he hit the ground.

“I definitely wasn’t the most athletic kid ever. I was short, stubby, fat and slow,” he said with a laugh. “It was crazy. I was like that all the way up through middle school. My friends were just better than me at everything. They were better basketball players, better athletes, better football players. Then I just hit a growth spurt my freshman year.”

Oh, how quickly things can change. 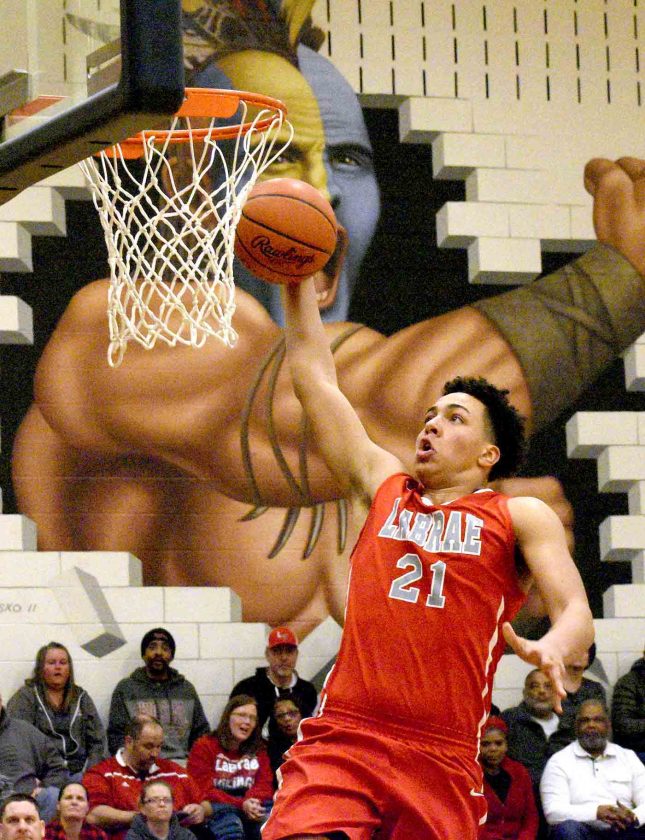 Tribune Chronicle file photo Tyler Stephens of LaBrae dunks during a game this past season.

Growth came in many forms for Stephens, who took full advantage of his opportunities. With the tutelage of a father who reached the NFL, Stephens immersed himself into training to become the best athlete possible. Within a year of reaching high school, Stephens was a rising star — a varsity starter in both football and basketball and his height continuing to increase along the way.

“He put in a ton of time,” LaBrae basketball coach Chad Kiser said. “That’s the thing a lot of people don’t see. It didn’t just come easy for him. He would leave basketball practice and go out and do weightlifting three times a week. He put in time to do extra footwork and agility drills all through high school. He was working at it all the time, multiple times during a day.

“We’d put in a good two-and-a-half hour practice and a weight-lifting session, and he’d go right out and work out in the fieldhouse for another hour.”

The results were impressive.

Now over 6-foot-6 and 230 pounds, Stephens, who will attend the University of Buffalo on a football scholarship in the fall, earned all-Ohio acclaim in both football and basketball, leading the Vikings to three playoff appearances on the gridiron and a district title in basketball. Also a four-year honor roll student who participated in church groups, helping the homeless and school clubs, his accomplishments earned Stephens the honor of being named Tribune Chronicle Male Athlete of the Year.

Stephens was chosen over Jack DelGarbino of Girard and Vinny Mauri of Howland in a close vote by the Tribune Chronicle sports staff.

It’s an award Stephens said came through hard work — and the guidance of his parents. He said while his father, Tony, brought intricate knowledge of sports and training, his mother, Christine, made sure he never lost sight of his education. His extended family played a role as well.

“I’ve seen it all through my family,” said Stephens of why he brought such a determined work ethic to everything. “My dad had a chance to play in college, and he was a freshman starter at Kent, and my uncle was a professional boxer. My other uncle played overseas, and my other uncle also played at Toledo, so everything they told me, they had all the backup in the world to prove it. I just stuck with that, and I’ve just been working with that ever since.”

The culmination led to a special senior year.

In basketball, the forward averaged a double-double, scoring 21 points and grabbing 12 rebounds, with the ability to post up and dunk or spot up and shoot the 3. He was the district player of the year, named first-team all-state and finished his career as a 1,000-point scorer (despite playing just three years of varsity).

Football was where his blend of size, strength, skill and athleticism really attracted potential recruiters. An end on both sides of the ball, he recorded 16 tackles for loss on defense as a senior and set the school record for career TFLs. On offense, the prolific tight end caught 22 passes for 478 yards and six touchdowns as a senior on an offense that was loaded with talent.

Vikings football coach John Armeni raved about Stephens as a player, teammate and leader. He had a chance to see Stephens’ ability stand out for four seasons, and then again most recently during the North-South All-Star game earlier this year, with Armeni a coach and Stephens a player on the Division IV-VII team.

“With all the talent on the field, and we scrimmaged the North (Divisions) 1 through III team, and almost all of those guys are Division I (college) players, and he dominated guys,” Armeni said. “Guys going to Toledo, guys going to Cincinnati, so he belongs. He has ‘it.’ Whatever ‘it’ is, he has it.”

The “it” is Stephens’ ability to come through in clutch situations.

Both Kiser and Armeni said he always rose to the occasion in big moments. Of equal importance was how Stephens acted during other moments. His understanding of how to carry himself as a leader is one of the qualities Armeni appreciates the most about the two-way star.

“He’s got a really good knack for understanding the moment, and that’s rare,” he said. “To have someone that young understand when it’s time to be serious, (and) when it’s OK to be a little bit light-hearted and funny … I think that’s the most important thing because he really does have a fun personality.

“A lot of times he’ll come off serious, he’s business-oriented, but then there’s other times where you can’t stop him from laughing. He understands when it’s OK to do that. I don’t think I’ve ever had to tell him to be serious or stop messing around because he just knows when it’s OK to do those things. That’s probably the most impressive thing as a coach.”

From clunky, gangly and uncoordinated, Stephens morphed into an athlete with style, swag and precision.

Still growing and now reaching 6-7, Stephens hopes his development is only beginning as he takes his talents to Buffalo.

“I want to make my impact as quick as possible,” he said. “I want to do what I can do and hopefully, sophomore year, I should be starting. I want to do a lot of good things and make a lot of people proud, and maybe one day make it to the (NFL). That’s every kid’s dream, and that’s definitely mine, so I hope I can do that one day.”

He’ll have come a long way if so.