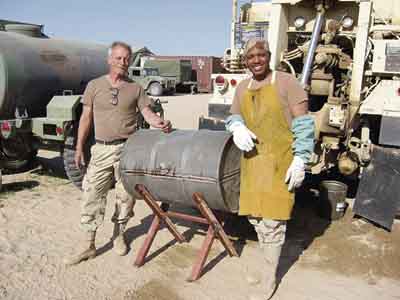 Submitted photo U.S. Army veteran Wilson Stoutamire of Warren, right, shows off his welding skills with his barbecue creation used for his unit’s going away party as they prepared to leave the Middle East in September 2003.

EDITOR’S NOTE: This is part of a series published each Monday between Memorial Day and Veterans Day honoring local veterans. To nominate a veteran, email metro editor Marly Kosinski at mkosinski@tribtoday.com.

WARREN — Long before Hollywood told the story of a black man wanting to become an underwater welder in the U.S. Navy, Warren resident Wilson Stoutamire III possessed those same aspirations while a student at the old Warren Western Reserve High School during the early 1980s.

“But after I found out I had to take SCUBA lessons, I wanted no part of that,” Stoutamire said with a laugh as he talked about his comparisons to the character played by Cuba Gooding Jr. in the 2000 theatric drama “Men of Honor.”

This aspiration, however, was the beginning of Stoutamire’s road to honor in the second Iraqi War during 2003.

Stoutamire joined the U.S. Army shortly after graduating from Western Reserve in June 1985. In his first hitch, he served both in the active military and the Army Reserve, traveling to such places as Fort Sill, Oklahoma; Fort Carson, Colorado; and Camps Stanley and Casey in South Korea. It was during this time that the United States started its first military action in the Arab desert, freeing Kuwait from the clutches of Saddam Hussein in 1990-91.

However, Stoutamire said he had little to do with Operation Desert Storm. It was during the leadup to the second Iraqi war that he returned to military service for a second hitch as an Army reservist with the 347th Quartermaster Co. out of Farrell, Pa.

“In those seven years in between, I became a certified welder working in Champion, and it was a blessing that I had that experience,” he said. “Our group absolutely needed a welder, and I did as much as I could.”

“My early time in the Middle East was spent doing repairs with the 54th, but by the time we came up with the 130th, I was the only welder in charge of taking care of the bridges, either protecting and fortifying the ones the Iraqis didn’t destroy or building new ones that they had,” Stoutamire said.

He remembers the long days during the American offensive and the rough, sandy terrain and windstorms that sometimes caused terrible accidents among the vehicles in his group.

“It wasn’t really anybody’s fault,” he said. “We were doing the best as we could under the poor visibility.”

As the Americans neared Baghdad, Stoutamire recalled his vital role in “Objective Peach,” which involved securing one of the major bridges leading into the capital city.

“I remember working all day and night, cutting rebar (reinforcing steel) and laying down a new bridge foundation, since the Iraqis only partially damaged that one,” Stoutamire said. “I remember being fired upon while working on that bridge. Things got better after our guys sent a javelin into a warehouse where the gunfire was coming from.”

He said the accomplishments of his group were documented in an April 4, 2003, New York Post story that was later emblazoned on a T-shirt Stoutamire received after his service time.

After Baghdad fell, Stoutamire was assigned to the Third Infantry Division of the regular Army where he performed what he called “humanitarian duties.”

One of his assignments was rebuilding — through his welding efforts — pedestrian bridges throughout the city.

“The Iraqis destroyed almost all of the bridges, and this cut off the citizenry from work and their families,” he said.

Stoutamire said one of his other less-appealing duties while in Iraq was to bury the casualties of war.

“These were the Iraqis — the military, the non-military combatants and the citizens — all in mass graves,” he said.

Also, Stoutamire was praised for his design of a welded “Port-a-Potty” for his unit, of which he said he made about a dozen.

By the end of summer, after returning to Kuwait, Stoutamire’s unit was ready to leave the Middle East.

“We wanted to have a get-together before leaving the country, so I welded together a barbecue for the party,” Stoutamire laughed.

Noting that he didn’t get much time to “de-brief” from military action, he said it took only three days from being shipped from the Middle East to Fort Leonard Wood in Missouri and then to his home in Warren.

When he came home, he became a human resource sergeant for the 423rd Quartermaster group.

“This was the beginning of my negative phase of my service. I have to admit that I wasn’t a very good soldier at this time. I was in an unstable mental state,” he said about his service with the reservists of the 423rd in Lordstown and then the 762nd Transportation Co. out of Akron.

“Not one of my colleagues could understand what I went through because they didn’t see combat,” he said.

He said he believes the Post-Traumatic Stress Disorder was triggered as he was on funeral duty for military personnel.

“I just lost it one day after we attended a funeral in Geauga County,” he said. “I have to say the PTSD then led me into some dark places, like a divorce and legal problems.”

But thanks to the efforts of the Veterans Administration and Trumbull County Veterans Services office headed by Herman Breuer, Stoutamire said he can look back at his military experience as a positive one.

He said the best part of his recovery is getting back together with his wife and two sons.

As for his welding work, Stoutamire said that part of his life is gone now, but he will always have the good memories of his military experiences as he takes vacations to Arizona and spends time on the golf course.