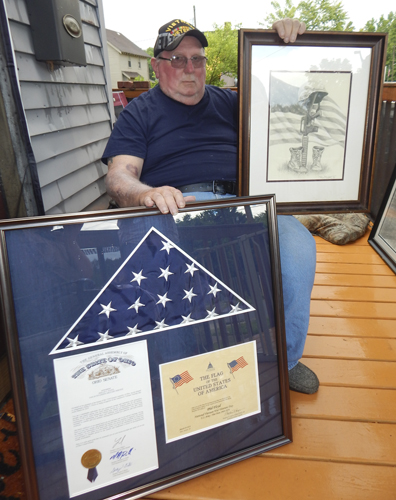 Staff photo / Bob Coupland Phillip Floyd of Warren, who served with the U.S. Army during the Vietnam War in the late 1960s and early 1970s, shows the commendations and other items he received for his service.

WARREN — When Phillip Floyd and other service members came home in the early 1970s after the Vietnam War, they did not receive a warm welcome like others returning from earlier wars.

However, Floyd of Warren, said the attitudes have changed, and he and other Vietnam War era veterans are being treated much differently today and thanked for their service.

Floyd, 71, said after he graduated from Leavittsburg High School, he was drafted into the U.S. Army in 1969.

“Many of us knew being drafted was going to happen back then. I was drafted into the Army. This happened to a lot of people including one friend of mine,” Floyd said.

At age 19, he went to Fort Campbell, Kentucky, for basic training and then Fort Leonard Wood, Missouri, for combat engineering training, which included learning skills for road work, ditch digging and general construction.

Floyd next was sent to Vietnam and was stationed in the Central Highlands mountain area.

“We would go out during battle to help build stuff for helicopters and bring gun replacements. I and others would help where they needed us,” he said.

Floyd said when helicopters, heavy equipment and artillery were targets of rocket attacks, the men had to find ways to shield the vehicles so they did not get blown up.

“I remember seeing one of the battles take place. At that time they said they were cutting back and sending troops home, and they pulled the first infantry out and then replaced them with new draftees. There were people who had been there a long time, so they were putting fresh ones in,” he said.

Floyd said at times he hated his experience in Vietnam.

“The war itself, the smell and the heat made it terrible,” he said.

At other times, Floyd would be assigned to build highways, which he said kept his mind off some of the bad situations.

During a rocket attack, Floyd was injured.

“We heard the planes coming in so we all took off running, and I jumped over some barrels and did not get over them fast enough and I got a piece of metal in my leg,” Floyd said.

He twisted his knee and was taken to the hospital to be patched up.

Floyd said in the late 1960s and early 1970s, many activists were against the war.

“When I got home, I went to Washington, D.C., and was standing in the rotunda and a Vietnam veteran came in not looking the greatest with no shoes on and a woman made a scene about it. I got into an argument with her about it. I told her he had more rights to be there at the event than she did,” Floyd said.

He said back then, they did not receive a very warm welcome home.

“Back then there was not much of a welcome. Today the Vietnam veterans are getting more recognition, but it is not enough. I can respect myself knowing I served my country. I can voice my opinion because I feel I earned the right to say what I want to say,” Floyd said.

In recent years, Floyd has received commendations from local and state officials for his service, which he appreciates. He was surprised once at Greenwood Chevrolet, which honored him and other veterans for their service with special plaques and flags that flew over the Capitol building.

Floyd said he wears a special Vietnam veteran hat when he goes out.

“I have many people come up to me and thank me for my service. I appreciate being recognized and thanked,” he said.