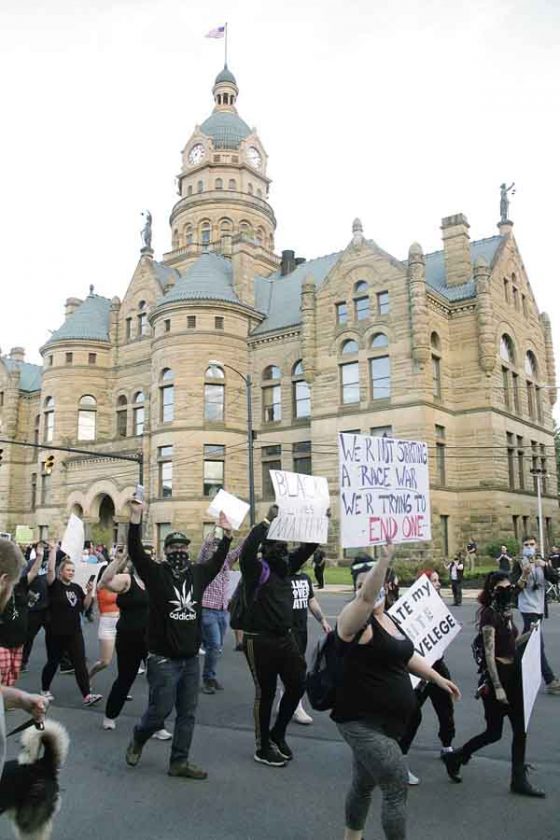 Staff photo / Allie Vugrincic ABOVE: More than 1,000 people marched through downtown Warren on Monday in a peaceful protest for better treatment of black Americans.

To view a slideshow of photos from the event, click here

WARREN — People from across Trumbull County met in Warren on Monday evening and shouted in unison — demanding justice not only for George Floyd, but for other black Americans who have been abused by law enforcement.

More than 1,000 people marched from Perkins Park, around Courthouse Square and back to the Warren Community Amphitheatre.

They shouted “Black lives matter,” “No justice, no peace,” and other statements of support.

Powell, 19, of Warren, organized the peaceful protest at the park Monday evening in response to the death of George Floyd, 46, on Memorial Day. Floyd died in police custody after former Minneapolis police officer Derek Chauvin, 44, knelt on his neck to restrain him.

“Me being an African-American myself, and having a black son and a black brother … that sparked something in me to go out and evoke change,” Powell said. “I did have that common fear as I am raising a black son, but that has transitioned into hope. Change is possible and we need to teach our children that. It starts with the children.”

She added: “It all starts with the small towns. When we band together in our smaller towns, then everyone can see it, us as one, leading by example.”

Powell’s brother Le Tavyen Powell, 18, said he believes this city is divided and that the protest is going to help bring unity to the city. “Today will show who cares and who will step out when the odds are against us,” he said.

“Ignoring an issue will not bring forth a solution,” Marsano said. “Although we’re a predominately caucasian church, we’ve been praying about what has been happening in the black community. We felt we needed to be here helping to find solutions to injustice being perpetrated.”

Kizzy Evans, 42, described being personally harassed by a police officer, and having friends and relatives who’ve had confrontations with police.

Brittany Daws, Brian Smith and Courtney Caraway, all of Warren, attended to support positive change in the relationship between police officers and the black community.

“We have to make police officers accountable for their actions,” Smith said.

Debbie Patrizi of Niles, was an ally for her black friends.

“This is extremely important. When I drive, I don’t fear that my life could end. I can’t imagine how that would feel,” Patrizi said. “I have witnessed racism in my time and I’ve always tried to stand up against it.”

“We wanted to make sure the organizers got their message across,” Colbert said. “We did not want their message to get lost because of the actions of a few who resorted to violence, as happened in other communities.”

One person was arrested but no violent acts were reported, according to Colbert. A smaller rally that occurred afterward and temporarily blocked Market Street, involved several hundred people walking to the city’s municipal building and police station. It, too, was without incident.

Julian Walker of the Warren Board of Education, the keynote speaker, emphasized that Warren may not have the magnitude of problems seen in other communities, but there are still issues that must be addressed and changes that need to be made.

“A lot of young people get frustrated about the pace of change, but I’m encouraging them to become involved,” Walker said. “People can change a community by making personal commitments, by becoming part of grassroots campaigns, by making sure to vote for people running for local offices and, perhaps by running for office themselves.”

Walker said the rallies in Warren and across the country are bringing a new awareness and that brings power to the ideas being discussed.

“It sends a powerful message, especially when they end peacefully,” he said.

Earlier Monday, inmates, under the supervision of corrections officers and county maintenance employees, shoveled rocks out of the landscaping in front of the Trumbull County Sheriff’s Office in order to prevent them from becoming projectiles, according to Frank Fuda, Trumbull County commissioner.

Fire suppression equipment from Warren Fire Equipment was brought to the Trumbull County Administration Building, 160 High St. NW, next to the sheriff’s department, which was fully staffed Monday night.

Sheriff Paul Monroe said he took precautions, though he expected a peaceful protest.

“This town belongs to the people of Warren. A rally comes with responsibility for the people participating,” Monroe said.

The Eastwood Mall remained open on Monday, but many of the largest retailers in the complex were closed by 3 p.m., including Target, Kohl’s, TJ Maxx, Best Buy and Dick’s Sporting Goods.

At least two Howland police cruisers were parked near Kohl’s and several Niles police vehicles were parked or patrolling around the complex.

Dick’s boarded up its main entrance and windows from the inside in order to prevent looting after rumors swirled that protesters were coming.

Walmart in Warren closed early for the day Monday.

Bishop George V. Murry of the Diocese of Youngstown released remarks about the killing of Floyd. Murry, along with his brother bishops, stated “that the fight to eradicate racism is a pro-life issue. Racism is not a thing of the past or simply a throwaway political issue when convenient. It is a real and present danger that must be met head on.”

Murry and bishops around the country released a statement encouraging Americans to encounter people of different cultural backgrounds to seek greater understanding and unity.

“Encounters such as these will start to bring about the needed transformation of our understanding of true life, charity and justice in our country,” the statement said.

SOUTHINGTON — Township trustees at a recent special meeting approved a contract for $74,000 with Mid State ...

VIENNA — Mosquito spraying will be conducted starting at dusk today in the township. Residents are asked to ...

WEATHERSFIELD — The Ohio State Highway Patrol is investigating the death of a McDonald man killed in a late ...

Motorists can expect delays beginning Monday as crews begin work on state Routes 5 and 88 for resurfacing. The work ...