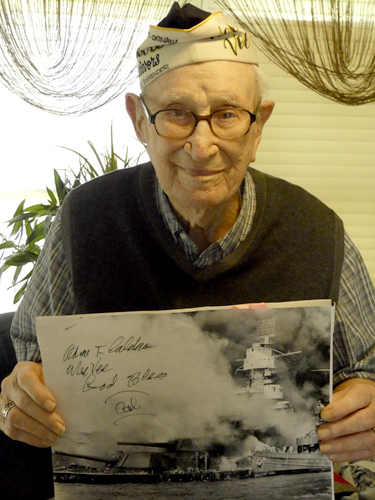 Staff photo / Beth Shiller Adone “Cal” Calderone, 99, holds a photo of the damaged USS West Virginia, in which he was trapped when the Japanese bombed Pearl Harbor in 1941.

NILES — Adone “Cal” Calderone, who will turn 100 on Thursday, can recall the events of Pearl Harbor like it was yesterday.

“There were six of us, the water was up to here (his chin),” Calderone said as he described when the ship began to take on water.

Calderone joined the Navy on Oct. 15, 1940. He joined as a musician for the Navy band, for which he played the tuba and string bass and eventually became a conductor. He became a member of the USS West Virginia, and his band, along with seven others, performed on the ships and at bases.

“I’m not a hero; I’m a musician … They wanted to change my rank to electronic specialist. I said, ‘I came in a musician; I go out as a musician.’ … I don’t want to be remembered as a hero. It’s what we did,” Calderone said.

On Dec. 6, 1941, Calderone was participating in a “battle of the bands” type competition with members of the USS Arizona, as his ship was on duty and couldn’t participate themselves. The Arizona band needed a string bass player and requested Calderone come play with them. He was invited to an after-party on the Arizona as well but declined because he knew his commanding officer wanted him back early for drills.

“I wished everybody a ‘Merry Christmas and I will see you all on Christmas Day.’ The next day they were dead,” Calderone said. “That’s why I wear black all the time, in memory of those 22.”

The USS Arizona was attacked and every member of the Arizona band was killed.

“Imagine that — I would have been dead. The torpedo hit right in their quarters, right down into the magazine and blew the ship right out of the water,” he said. “I lost 22 friends that morning.”

The West Virginia took a few hits, and Calderone was hit in the face with shrapnel. After getting treated, he returned to his ship, passing lines of people being treated and those, marked with a red pencil, who couldn’t. He went below deck to open valves and knew he was trapped with five other soldiers when water began flowing into the compartment.

Calderone recalled one of the men mentioning an air vent close by that led up to the boat deck. He asked them if they wanted to try to climb it. They all said yes and held hands. He said the guy holding his right hand squeezed it so hard he thought his hand was going to break. The men held their breath and climbed out of the vent and were pulled onto the deck.

“They thought everybody was scared; everybody was mad. I think I can swear for five minutes without saying the same word twice,” Calderone said.

He said they fought the fires at Pearl Harbor for a day and a half. Two hours of battle led to a day-and-a-half of cleanup. The USS Arizona sank, and the USS West Virginia was hit a total of eight times. Seven were found and fixed immediately, the eighth hit was found 60 years later.

After Pearl Harbor, Calderone became a coder during the Battle of Midway and the USS West Virginia went on to receive a total of five battle stars.

When Calderone came home to Niles in 1945, he was eager to marry his high school sweetheart, Carrie, who now is 97.

“She waited four years; I wasn’t going to make her wait any longer,” he said.

Calderone officially was discharged from the Navy in 1946. “Pearl Harbor was probably the important day in my life, outside of getting married.”

He and Carrie celebrated their 75th wedding anniversary on St. Patrick’s Day.

While Cal worked in insurance and investments, his passion for music remained strong. He was executive director of the W.D. Packard Concert Band in Warren, a band he helped start in the 1950s.