Two semi accidents tie up I-80 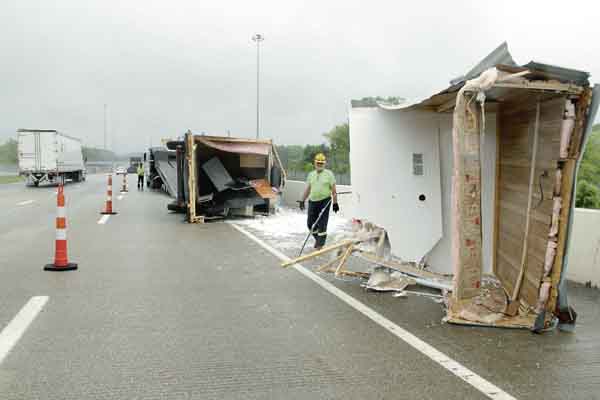 Crews prepare to tow away broken sections of a trailer that disconnected from its cab, overturned and broke into pieces Thursday morning on the Interstate 80 eastbound bridge of U.S. Route 422 in Girard.

A semitrailer jackknifed at 9:15 a.m. on a bridge in Liberty, backing up traffic for part of the morning. One person was taken to St. Elizabeth Youngstown Hospital with nonlife-threatening injuries, according to the Ohio State Highway Patrol.

The front of the cab appeared smashed as if it had run into the left concrete barricade. The semitrailer was removed and all lanes reopened by mid-afternoon.

There were unconfirmed reports of a diesel spill from the accident.

About an hour later, a trailer detached from a semitrailer traveling eastbound on I-80 in Girard. The semitrailer rolled over and broke into several pieces on the bridge over U.S. Route 422 in Girard.

There were no injuries and no fuel was spilled, according to the Girard Fire Department.

The incidents are the latest in a series involving semitrailers.

A semitrailer overturned on state Route 11 north off the 711 Connector near I-80 in Liberty on Wednesday afternoon. Between 50 and 100 gallons of diesel fuel spilled with crews able to contain it, according to a report.

Also on Wednesday, wires caught on a semitrailer and sparked a large fire at a warehouse on Henricks Road, which destroyed three roughly 6,000-square-foot storage facilities.

Since state orders for sheltering in place during the COVID-19 health crisis have been reduced, more drivers are gradually hitting the roads, but a representative of the state patrol said it is too early to tell if the area is seeing an increase in accidents.