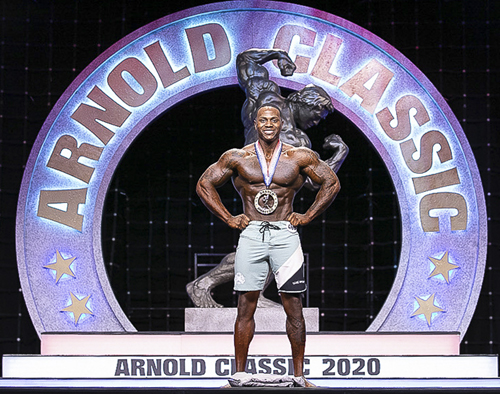 Chance E. Harper remembers those nights at Mollenkopf Stadium in his hometown of Warren.

“Such a close-knit community that, at the time, thrived on the sports in the local area,” said Harper, 25, who started three years at middle for the Raider football team. “So Friday night lights at the Mollenkopf Stadium was always the greatest place to play.

“Warren shaped me into the person I am,” Harper said.

He is the father of a 4-year-old daughter and 3-month-old son, a battalion retention officer in the Army, stationed in Fairbanks, Alaska, and the founder of It’s Your Chance Fitness, where he coaches both in person and online.

And he’s the owner of the medal as the 2020 Arnold Amateur Class E Men’s Physique champion, and the third-place overall finisher.

“I am so close to that IFBB (International Federal of Bodybuilding and Fitness) pro card. I was one place away from getting it,” Harper said. “With that being said, you’ll see me on another national stage this summer. We’re just getting started.”

The Arnold Amateur took place at the beginning of March in Columbus, just as the coronavirus pandemic was beginning to shut things down. Instead of the usual audience of about 200, the competition played out in front of a convention center empty of spectators.

“The Arnold was the greatest event I have ever been to,” Harper said. “Even despite having the COVID-19 situation occur a few days before the actual event and limiting what and who could watch, it was still a dream come true.

“Just being able to grace the stage that many great bodybuilders like Arnold Schwarzenegger, Dexter Jackson, Ronnie Coleman, Jay Cutler, Brandon Hendrickson and many more … was the greatest dream come true.

“My bodybuilding career took off faster than I expected. Winning my division at the Arnold Amateur was the goal, but to actually accomplish it was amazing,” he said.

He plans to compete for his IFBB pro card this September at the NPC North American Championships in Pittsburgh.

Harper grew up on Dodge Drive on the west side of Warren. After graduating from Warren G. Harding High School in 2013, he joined the Army.

“Been in the Army, active duty for six years now,” he said. “Only a few more months left until my service will come to an end.

“Started as an aircraft refuel, served as a part of a sling loading team, then transitioned into the office side of things, starting as a company retention officer, then finally a battalion retention officer.”

He said he began taking bodybuilding seriously only two years ago.

“I grew up always into working out and always stayed in shape,” he said. “(When) I learned about nutrition is when bodybuilding became a serious thing.

“Bodybuilding is all about passion and dedication. I think having those two in line creates an automatic discipline barrier.

“Life during my preparation for shows definitely isn’t the smoothest — 4 a.m. mornings to train and eat, and then having to work throughout the day while managing a consistent diet is tough, but the end goal keeps all of this possible.”

Instead of hiring a coach, Harper acted as his own trainer for the competition.

“Coaching yourself is 100 times harder because accountability is solely on you at this point,” he said.

He said he hopes to share his knowledge with others.

“It’s Your Chance Fitness is my personal training brand that I have developed over the past year,” Harper said.

“I have been big into fitness since high school and helping people in some way has always been my dream. Now with bodybuilding, I am able to help people create a more mobile lifestyle through working out and changing some nutrition habits.”

Coaching can be done in person or online. His website is www.itsyourchancefitness.com.