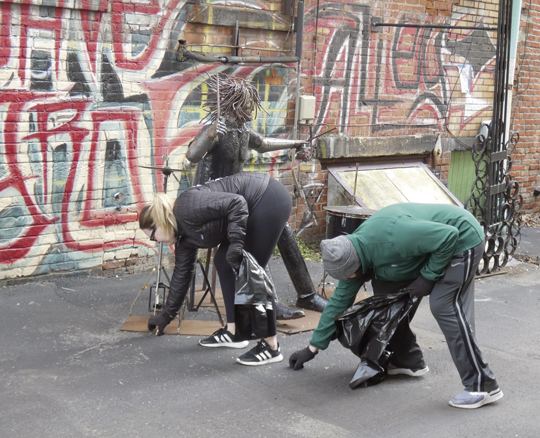 Caitlyn Brown, left, and Jeff Constantine work together to clean up garbage and debris in Dave Grohl Alley in Warren on Saturday morning. A group of more than 50 Warren residents worked to clean up the downtown area.

More than 50 residents came out to pick up litter along Market Street, Dave Grohl Alley and all over the downtown portion of the city.

This cleanup isn’t anything new, but the amount of support the community has shown is something of which Councilman at-Large John Brown is very proud.

“I think it shows the pride in Warren and that people love the city,” Brown said.

The city partnered with Trumbull Neighborhood Partnership to clean up debris and litter. TNP provided gloves and trash bags.

The outpouring of support overwhelmed all participants, along with the organizers of the event.

Denise Rising, community outreach coordinator for TNP, said the support for the city is exciting.

“We were really excited when we pulled up to see a dozen people already here. We’re psyched that we’re going to get a lot of work done today,” Rising said.

Community members John Large and Mark Waltko have been helping clean the city during similar events. Waltko said it’s something they can do to make the city look better, and Large said the pair help every time there’s a cleanup.

Adam Gregory, a member of the Historic Perkins Homestead Neighborhood Association, said he believes it’s always important for the community to get involved, especially when it comes to beautifying the city.

“We walk by these sidewalks every day, and I’d rather see them pretty, the way they should be seen, instead of cigarette butts and other trash,” Gregory said.

Also part of the cleanup team were Warren City Council members, which Gregory said is where it all starts.

“To actually get the citizens and community motivated to come out is important. When you see more people coming out, it shows you as a council member, you’re doing your job. You’re leading your ward to do better things,” Gregory said.

With the community involvement, it shows people care about the city. A common theme among many of the individuals who came out to help was the overall pride they have in the city.

“It makes me feel good that people actually care. Especially on a colder day and with all the coronavirus stuff going on, people still came out and it makes me feel good,” James Martin, a representative of Victory Christian Center, said.

Regarding the virus, the event coordinators took the proper precautions to ensure everyone who participated felt safe. Along with the equipment needed to clean the city, Trumbull Neighborhood Partnership also provided hand sanitizer and bottled water to the participants.

Following Saturday’s cleanup, Warren Safety Service Director Eddie Colbert said he would like to see the community begin to take it upon themselves to do what they can to clean up the city.

“At the end of the day, the government can only do so much. This is the people’s city,” Colbert said. “It’s nice to see people come together and do things like this. I encourage individuals themselves to go out and do the same things in their neighborhoods.”