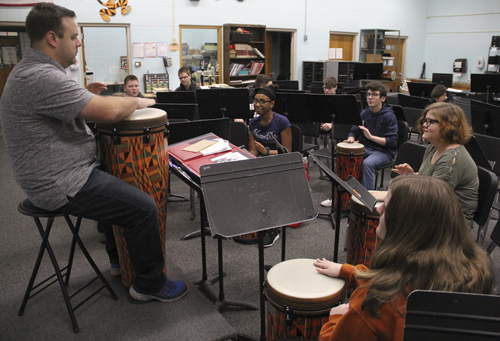 Last semester’s world drumming class focused on teaching students teamwork while also exploring west African culture alongside musical theory. This semester, the History of Rock and Roll is exploring how music has shaped society, from fashion to politics.

“A lot of people think that music is a fluff class, and it’s not,” said Shawn Reynolds, Howland Middle School music appreciation teacher and band director.

He said music reflects the broader culture, and that’s what he’s trying to teach students in his classes.

In world drumming, students play a high, medium or low drum, and have to work together for the ensemble to succeed.

“Each kid is responsible for learning their own part, and they’re learning that if their part isn’t played correctly, the whole thing falls apart,” Reynolds said. “So it’s a part of the bigger school culture, in that their part in the community is really important.”

Reynolds said the drums are meant to interact like a conversation.

“So it would be like me saying ‘how are you?’ in a low voice, and the high voice saying ‘I am fine.’ They’re filling in the space,” Reynolds said. “Question and Answer.”

“We would have to learn patience. If you went too fast, then you messed everything up. So patience was a big thing,” Adrionna said.

She said when she was in the class, she liked to play the middle drum, which is the easiest to pick up and has her favorite rhythm in ensembles.

The class, based on West African drumming, also explores the culture and musical styles of West Africa, as well as the Caribbean and South America, where indigenous West African people were brought.

The drums have African prints on them, which serve as a jumping-off point for conversation about the representation of African culture, and how different prints show drums come from different areas, Reynolds said.

The history of rock and roll looks at how the music genre shaped politics, clothing, and social behavior.

“They’re learning about how culture is intertwined, and politics is intertwined and everything about the Vietnam War was intertwined in this. The music of the 60s was reflective of civil rights,” said Reynolds.

He said the class also looks at the evolution of music in relation to buying power, going from vinyl in the 1950s to streaming services today, and talks about copyright laws.

Additionally, the class aims to expose students to new artists.

Wright said she liked learning about the “crooners” — singers who sing in a soft, intimate style, usually to the backing of a big band or orchestra. She said her favorite crooner is Michael Buble.

Eighth grader Weston Cardwell, 13, said Frank Sinatra is his favorite. Weston said he has enjoyed learning about people’s different voices and how they sing in different timbres. He’ll take away from the class the enjoyment of a new genre of music, he said.

Eighth grader Kameron Cornelius, who likes Buddy Holly, said she would like to be an artist or musician some day. She took drumming last year, often playing the medium or low drums, and is in the history class this year.

“I want to learn how to make music, so I’ll probably get some inspiration here,” Kameron said.