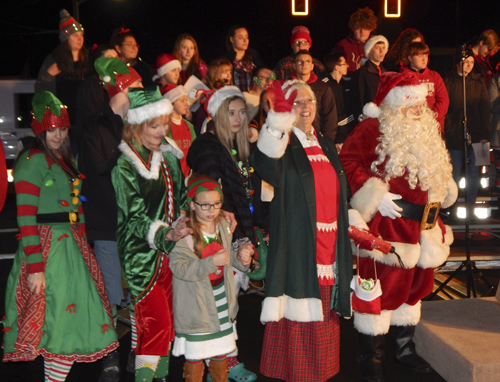 Staff photo / Bob Coupland Santa and Mrs. Claus, along with elves and other friends accompanied by the Newton Falls High School choir, in back, welcome in the holiday season with a tree-lighting ceremony Sunday in the village’s downtown area. The tree was lit by Youngstown State University President Jim Tressel. The tree is at the corner of West Broad and South Center streets.

Sunny skies earlier in the day quickly changed before 4 p.m. as a thunderstorm lashed Trumbull County.

Howland fire Chief James Pantalone and Jessica Gault, township park commissioner and one of the coordinators of the tree lighting, said about 200 people had gathered for the festivities. Then the skies turned dark and a thunderstorm began within the first half hour of the event.

“We were concerned for everyone’s safety, with the lightning and many of the activities out in the open,” Gault said. “The chief and I were discussing what to do, but with so much lightning and hail, we decided we had to cancel. We did not want anyone getting hurt.”

The tree lighting and a few songs by the Howland High School choir occurred before people took shelter in their vehicles or under tents when it started raining.

“We did the hot chocolate and were ready for the crowd and then it really started raining, hailing and lightning and everyone started taking off,” said Maria Morris of Howland, who helped at the event.

Sonia Perperidis of Howland, who was helping, said she was surprised by all the hail and how quickly the skies changed.

The National Weather Service in Cleveland had the high near 50 degrees Sunday with just more than three-quarters of an inch of rain by 5 p.m. Hazardous weather conditions were issued for northeastern Ohio, which included scattered thunderstorms producing pea-size hail and gusty winds.

Rain is expected to change to snow today.

The forecast has cooler temperatures with a high in the mid-30s and 60 percent chance of rain and snow with little accumulation expected. Wind gusts expected to be as high as 24 mph.

While the skies cleared early Sunday evening, other local communities, including Newton Falls, were able to hold their tree-lighting ceremonies.

At the event, Village Manager David Lynch presented a proclamation to resident Vonda Vencel for her work at maintaining the Four Corners Park area to honor local veterans at Center and Broad streets.

VIENNA — Non-essential personnel are being asked not to report to the Youngstown Air Reserve Station before 8 ...

WARREN — Two men were each sentenced to six-month prison terms Tuesday for their part in lower-level drug ...

NILES — A Niles woman pleaded guilty Tuesday to an attempted robbery charge in connection to a panhandling ...