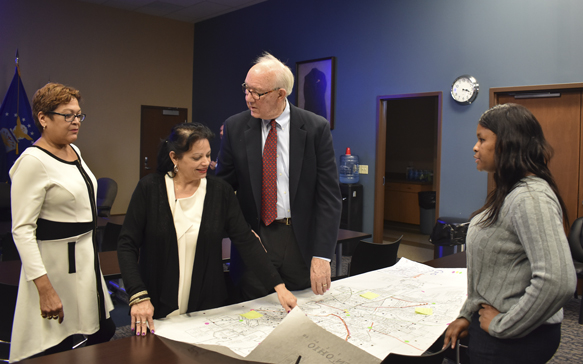 A meeting Wednesday afternoon at the Trumbull County Veterans Service Commission was well-attended, with about 50 people weighing in and listening to suggested routes for the new service.

Advocates for people expected to use the transit service spoke about the importance of access to people who live in low-income housing, shelters, nursing homes and assisted-living facilities, people living in food deserts and veterans.

The new fixed-route service will broaden Western Reserve Transit Authority’s presence in Trumbull County, and in addition to five or six new lines, it appears it will replace the door-to-door transportation services that have been offered by Trumbull County Transit. WRTA won’t just run the bus lines, but also will pick people up from one place and take them to another. If the person is elderly or disabled, he or she can utilize the door-to-door service no matter where they live. If the person is not elderly or disabled, he or she will be able to use it if the ride originates more than three-fourths of a mile away from a fixed route.

Fare information is available in full at WRTAonline.com, but day passes cost $3 for most and $1.50 for people who qualify for reduced rates.

Anyone who would like to influence the routes as WRTA designs them can email info@WRTAonline .com or executive director Dean Harris at DHarris @WRTAonline.com.

People who are disabled or 65 and older who would like to start the registration process now should call 330-744-8431 and request the ADA-eligible application.

In order to ensure transportation is still available for people in January and February, Mike Salamone, Trumbull Transit administrator, is working on a plan to use $70,000 the state gaveto the commissioners to bridge the gap.

The fare structure WRTA plans on implementing mirrors the one it uses now in Mahoning County. The routes are possible because of an award from the state that is expected to fund the services for the next 15 months.

The expanded routes in Trumbull County are not finalized, but the proposed routes include one in downtown Warren, one that would branch out to the Walmart shopping area off Elm Road in Bazetta, the hospitals off East Market Street, the industrialized area known as the Golden Triangle, residential areas off Niles Road in the Draper Street area and routes that travel the area’s southwest side and Parkman Road, Harris said. Riders also could board a WRTA Warren Express bus and travel U.S. Route 422 from Warren into Youngstown and other destinations in Mahoning County, Harris said.

Attendees on Wednesday wanted to be sure Tod Avenue is on the route.

Bryana Williams with Someplace Safe, a shelter for women and their children affected by domestic violence, said the women who stay at the shelter are cut off from the rest of the city and it is dangerous for them to walk to the Giant Eagle on Mahoning Avenue. And the Veterans Affairs Clinic on Tod Avenue is right next door, and veterans could use transportation there and back, too, Williams said.

Others spoke about the need for the routes to pass near nursing and assisted-living facilities, hospitals and medical centers, grocery stores and Kent State University at Trumbull.

Christian Bennett, food access coordinator for Trumbull Neighborhood Partnership, brought in a map TNP prepared with suggestions for ensuring the routes hit food deserts and other areas that may be cut off from easy access.

“We will try to get the routes as close to people as we can,” Charles Nelson, a consultant for WRTA, said. “After six months, we will re-evaluate the routes, and if there are requests or demands for changes, we will react to them.”

Once the routes are studied for use after they have been active for some time, WRTA will determine which routes are popular and which need tweaked, Harris said.