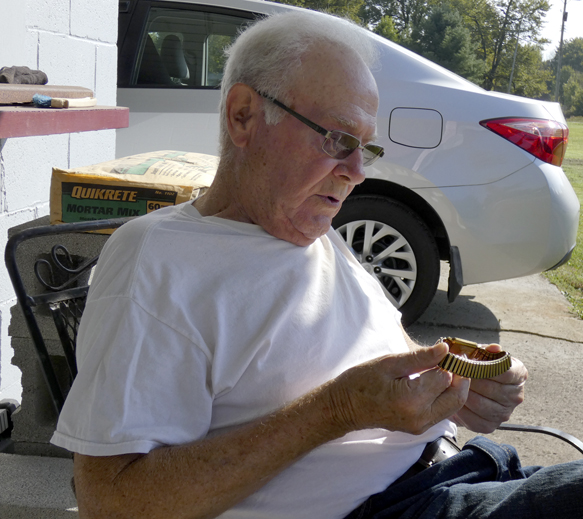 WEST FARMINGTON — Ora Hochstetler, 82, was drafted into the Army when he was 25. He was Amish, a pacifist faith, but answered the call anyway. When he came home, he was shunned.

Hochstetler served in Baumholder, Germany as an Army medic from March 1962 to November 1963.

Hochstetler said he didn’t see much action while working with the 194th Dispensary, but he did deal with many people coming in with lacerations and broken bones. He would work on anything life threatening to prevent the soldier from dying and then send them off to the stationary hospital.

“The worst thing that I encountered was an accident where their head went into the windshield. They had lacerations like say from here to here (forehead to crown), you could lift that scalp up and and that was where we sewed them up. The doctor would use a catgut suture on something like that,” he said.

But it was when he came home that Hochstetler really saw “action.”

“It’s what you’d call excommunication. They call it the ban,” Hochstetler said. “It was in association with your punishment. I guess that when you left the Army, you were a Yankee, or whatever you want to call it.”

Hochstetler wasn’t the first Amish man to be drafted into the war — others served in World War II and his younger brother served in Stuttgart, Germany. Hochstetler said he was the only Amish man from the area to be shunned because was baptized into the Amish church before he was drafted.

“Their belief was in the Scripture, thou shall not kill. But we forget that you’re supposed to defend yourself if you’ve been aggressed upon,” Hochstetler said. “Kind of like David and Goliath. I don’t believe in just going out and boom, kill somebody, but if I’m aggressed upon, I believe in defending myself.”

Hochstetler was shunned from his community, including his parents. He was allowed to visit, but was no longer considered a member of the community. He even had to find a new place to live.

If he wanted to, Hochstetler could’ve gone back to his Amish ways and worked his way back into the community. He consulted with a pastor about what to do and was told that “it doesn’t matter what they say. It’s between you and God. When the day comes, you stand before the Lord.”

Hochstetler said the hierarchy consisted of Old Order Amish and when he was married in 1965 and settled into his home, he decided to not go back to his community. He was baptized into a new faith and said he became free.

To this day, Hochstetler said he wishes his family could see the sacrifices he and the other soldiers made for this country. He also wishes everyone could see how important the soldiers’ sacrifices are.

“Enjoy your freedom and respect those that defend that freedom. I would go again if I was younger, but I’m a little past the age now,” he said.