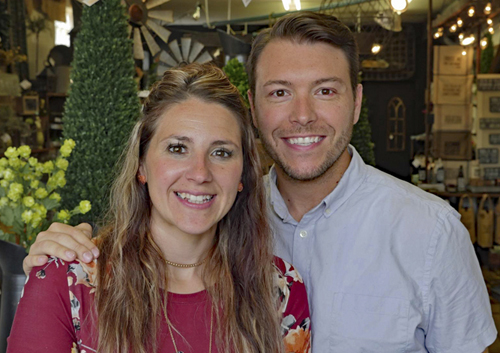 NILES — The first “land” that welcomes visitors to every Disney theme park in the world is “Main Street U.S.A.” It’s the America that Disney wants the world to experience. Sadly, it is an America that is now largely non-existent.

But it still exists in Niles.

When Nick Giancola and his sister, Erica Lewis, decided to start their first Spruce Home Decor store on Robbins Avenue in Niles, it was that now-mythical vision of Main Street U.S.A that inspired them.

Reflecting on the store’s origins, Giancola said, “The days when small, independent shops ruled retail markets were, by 2014, days long past. But there has been a big movement in business in recent years away from large corporate stores back to Main Street U.S.A.

“We felt there was a need for shops like Spruce to appear again. We felt that people wanted that,” Giancola said.

Raised in McDonald and graduates of McDonald High School, Giancola and Lewis are living reflections of small-town values. They are 1980s babies, and their homespun business philosophies would fit right in with the 1880s as well. In a spiritual sense, Giancola and Lewis would not be out of place in a Norman Rockwell painting.

After high school, the siblings took different paths to self-discovery.

“I went to school for cosmetology, graduating in 2006, and worked behind the chair for 10 years. I then became an instructor at Raphael’s Beauty Academy teaching girls how to get their cosmetology licenses,” Lewis said.

While Lewis was making the world more beautiful one head of hair at time, Giancola was following his own dream as an actor and musician.

“I grew up on the stage,” he said, “acting in a lot of different plays and musicals at Powers Auditorium and the Youngstown Playhouse. I attended Youngstown State University for a year to study vocal performance until I decided that I needed a business degree as well. I found Belmont University in Nashville.”

Belmont is a small Christian university of 2,500 students on the edge of Nashville’s Music Row. It is known for its music business program.

“Belmont is a school that fosters community and friendship,” Giancola said. “It’s close knit. It was another moment in my life that made a huge imprint on me. It was a school where I could hold on to the values I grew up with.”

Following graduation, Giancola apprenticed on Music Row for a short time before following the call of the wild — Los Angeles.

“I thought, ‘I gotta get there.’ Everybody’s trying to get to LA, to get to the music scene there, so off I went. And the most important thing I learned there was LA was not for me.”

Returning to Ohio in 2013, Giancola found Lewis thinking in new directions, too.

“I gave birth to a daughter and then had identical twin sons, all in one year,” Lewis said. “I wanted to spend more time with them. I didn’t want to go back to work at the Beauty Academy. When Eric told me he was coming home to be with our family again, we said, ‘Let’s do something together.’ So, we opened a store.”

Spruce is truly a family affair. Their mother, Cindy, manages the day-to-day operations of the store. Their father, Nick, works a full-time day job but still manages to drop by the shop every day.

Lewis beamed, “Our 82-year-old grandma comes in every Thursday. Everybody knows Grandma. She and Grandpa play huge supportive roles in our business.”

“We cannot forget about our dad,” Giancola added. “Our dad is the one that made it all possible. He works eight to 10 hours every day, and then he comes to the store after work. He taught us how to do everything. Dad is one of the hardest-working guys I’ve ever met in my life.”

Despite his busy schedule, Giancola continues to practice his early love of music as the musical worship leader at Girard United Methodist Church.

“Our services are contemporary,” he said. “We have a small band and a female singer. We lead worship every Sunday.”

He and Lewis have stayed true to their original vision. It is embedded in their DNA.

“We’re a retailer,” Giancola said. “Yes, we need sales to make it all work. But we have a larger, underlying philosophy. People come through our doors every day that we don’t know. Somehow, we have become a sounding board for them. We grow with them, we go through their pregnancies, they let us share in their lives. We become part of their stories.

“For us, that’s the bigger picture. Our shops in Niles and Boardman create an environment that lets people escape for a time from the challenges of the world to a peaceful place of comfort and joy,” he said.

Lewis echoed that sentiment and articulated the beautiful simplicity of their beliefs: “I don’t need a lot of money. I don’t need a fancy car. I just need my friends and my family and the many new friends who visit our stores every day. That’s what makes me happy.”