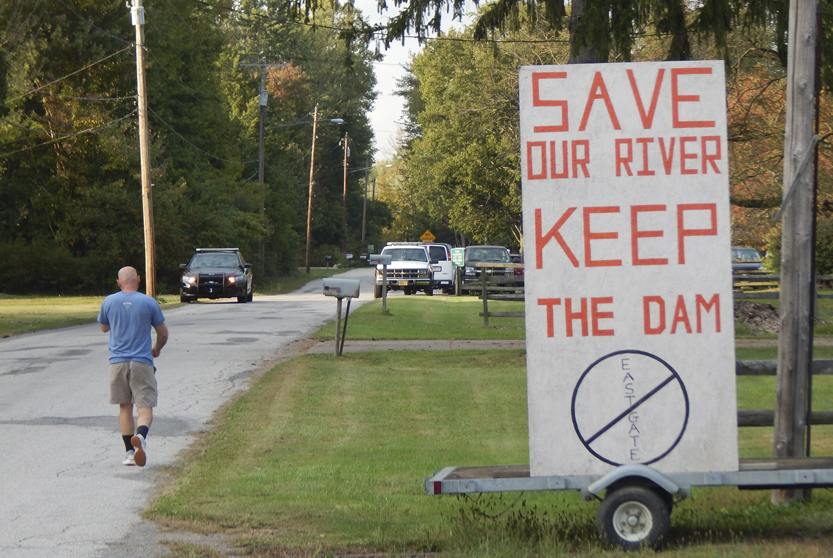 Staff photo / Bob Coupland A sign in a yard on Gilmer Road near the Johnson Community Center in Warren Township echoes the sentiments of many residents who are against the possible removal of the Leavittsburg Dam off West Market Street and South Leavitt Road. Nearly 100 residents attended an informational meeting Tuesday at the center.

WARREN TOWNSHIP — The possibility that the Leavittsburg dam off South Leavitt Road and West Market Street may be removed drew both concern and anger from nearly 100 residents who attended an informational meeting on the topic Tuesday at the Johnson Community Center.

With standing room only, residents listened to a presentation by the Ohio Environmental Protection Agency on what factors go into deciding if a dam should be removed. Residents worried about the impact of more flooding in their neighborhood and the effect on wildlife in the area asked questions and expressed concern.

Warren Township and Braceville officials and members of the Downtown Leavittsburg Heritage Association were among those in attendance.

A large sign that read “Save Our River, Keep Our Dam” was in a front yard near the center’s property.

William Zawiski, supervisor for water quality with the Ohio EPA, said many factors determine a dam’s removal such as safety, water quality, aquatic habitation, flood control, historical significance and community improvements. Some dams are used by companies, such as the dam at Girard and McDonald, which is used by McDonald Steel.

The plan to remove the Leavittsburg dam and others is being orchestrated through the Eastgate Regional Council of Governments and local communities in a move to help speed the natural cleaning process of the river and potentially spur recreational or economic development along its banks.

Zawiski said the dam is not used for flood control or for drinking, but more for recreational and social purposes.

“The Ohio EPA does not have anything to do with taking a dam out but works in partnership with the owner. If you do not own the structure, you do not have a say in it,” Zawiski said.

Officials said the dam is owned by Trumbull County MetroParks.

He said many of the dams along the Mahoning River likely will be taken out by the rivers themselves eventually, which is a safety concern.

“There are dams that are taken out improve water quality and restoration. The Lisbon Dam was taken out as a restoration project,” Zawiski said.

He said when dams are taken out, the river will restore itself with new vegetation.

Linda Morgan of Meadowbrook Drive said she was concerned about more flooding if the dam is taken out, as her property and others are along the river.

“We do not want the dam removed. We live along the river, and if the dam is removed, there will be more flooding. How will this impact us and how will we be taken care of?” she said.

Morgan said she has been flooded several times already and spends $1,800 per year for flood insurance.

“Can you guarantee we will not get flooded anymore?” she said.

Zawiski said there will always be a river, just no dam.

Frank Migliozzi, health commissioner with the Trumbull County Combined Health District, said some residents along the river have permitted systems whose pipes discharge to the water’s edge, some near the dam. He said the systems are monitored annually.

“If the dam is taken out, it will alter the water level and result in stagnant water, creating nuisance problems. That is what a lot of residents are concerned about. This has to seriously be looked at,” he said.

Other residents expressed concern about wildlife such as eagles, otters and beavers, and want money spent on dam removal used for road improvements and other projects.

“The dam’s removal for many people is a big deal,” said resident Shirley Coombs.

Warren Township trustees have stated previously they are against the removal of the dam.

Shelter outing out of tickets

KINSMAN —While Kinsman trustees spent a large part of last year working to get a section of Lakeview Drive over ...

Brown may endorse prior to primary

YOUNGSTOWN — U.S. Sen. Sherrod Brown, who explored running for president, said he could endorse a Democrat for ...