Packard offspring’s life was anything but conventional 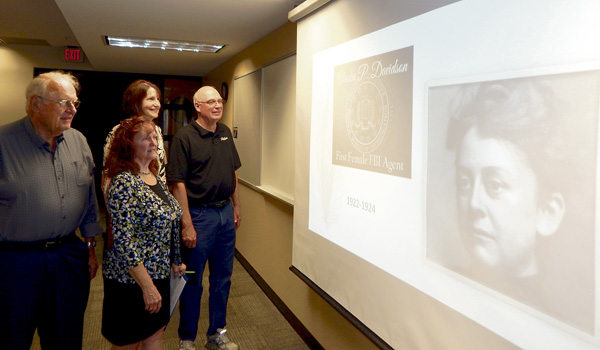 CHAMPION — Alaska Packard Davidson was a woman before her time — she was the first woman hired by the FBI as a special agent and led a company in the 19th century business world dominated by men.

Cindee Mines of Champion, with the historical society and a volunteer at the National Packard Museum, said Packard grew up in Warren to a wealthy family of hardware store and lumber mill owners. She lived in one of the largest homes in Warren — the Packard Mansion on High Street, torn down in 1965.

Mines said Packard was the third child of five born to Warren and Mary Elizabeth Packard. Born in 1868, her parents named her “Alaska” because the United States bought the territory the year before.

“We can assume that Warren and Mary approved of that territory purchase since they named their daughter after the territory. I personally would not be happy if my parents named me after a territory,” Mines said.

Mines said Alaska Packard’s mother was a firm believer in equality between women and men and educating young women.

In 1890, Packard became the superintendent of the New York and Ohio Company on North Avenue, which later became the Ohio Lamp Division.

“It was unusual for a woman to be in charge, but Alaska’s older brothers felt women were better able to put cylinders into lamps, which are light bulbs, so they felt a woman should be in charge. This was quite an achievement for her since women would not get the right to vote for another 30 years,” Mines said.

Mines showed many slides of Packard’s life which included bicycling around Warren as well as to Leavittsburg and even Nelson Ledges. She was also involved with many social groups.

The highlight of Pack-ard’s life happened when she was 54 in 1922, when she began working at the Federal Bureau of Investigation as a special agent.

“There were two other women who also served at the same time, but information showed that Alaska was the first. I have never found anything that says why,” Mines said.

As a special investigator, Packard went through training in New York City and earned $7 per day — which is about $102 today,Mines said.

The special agent in charge of New York City decided that Packard “was a very refined lady and should not work in every investigation since there were some cases where the people they may be dealing with would be rough,” Mines said.

Mines said Packard worked on cases involving “white slavery,” or sex trafficking cases. It was illegal to take women over state lines “for any immoral purpose.”

In 1924, the new director of the FBI in Washington, D.C., did away with women FBI agents. Her last day was June of that year. Women rejoined the bureau in 1972.

Packard died in 1934 and is buried in Paltzgrove Cemetery, off Hewitt Gifford Road in Lordstown.

“Whatever you can say about Alaska Packard, she led an unusual life. She was born into a wealthy family, was the head of a major factory and became an agent for the FBI at age 54. She led such an interesting life and was ahead of her time,” Mines said.