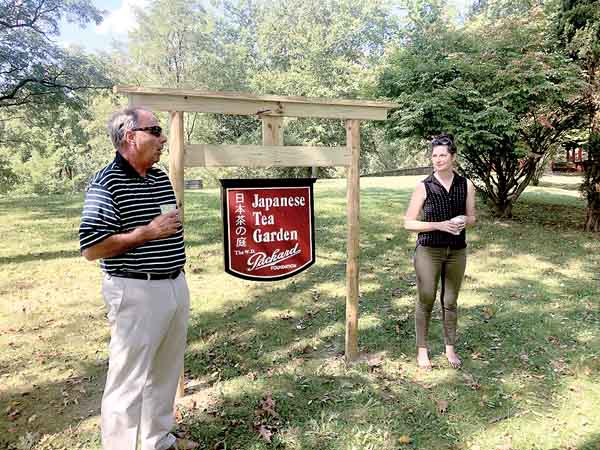 WARREN — When one thinks of Warren, Ohio, a Japanese tea garden probably is not the first thing that comes to mind. But the city is home to the second one built in the United States, with the first being in San Francisco.

On Sunday, a group gathered in Packard Park with green tea and sushi to celebrate the completion of renovations on the 104-year-old tea garden.

One of those people was Meghan Reed, W.D. Packard Foundation president and director of the Trumbull County Historical Society.

“W.D. Packard founded this tea garden in 1915 as a spiritual oasis, sort of break from the urbanization of Warren, and that’s a theme with tea gardens that we see throughout history,” Reed said.

The garden had fallen into disrepair over recent decades. The Packard Foundation and a team of volunteers worked for months on repairs and landscaping. Assistance and materials were also donated by the Trumbull Neighborhood Partnership, Carter Lumber, Paul Clouser of National Fire and Water Repair, and Master Gardener Pat Fuller.

Reed said she began her involvement with the W.D. Packard Foundation about five years ago, which is when renovations began in the park.

At that time, the W.D. Packard Foundation was under the leadership of Jim Fogarty who was also present at Sunday’s ribbon cutting ceremony.

Fogarty told the crowd, “We’re a small but mighty group of observers today and I want to just reiterate again what Meghan has said. You know the fence that you see around here, the fact that you can see the Mahoning River now, the paint job, some of the plantings, this torii — all these things were built by our hands.”

Reed said the garden came to be after W.D. Packard visited the San Francisco tea garden a couple years before 1915. He wanted one built in Warren, so he hired a landscape architect to design the garden with Japanese shrubs.

Today, new fencing and the freshly painted pagoda have helped to bring the garden back to life.

Reed said this is phase one of the renovation and phase two “will encompass some more large scale landscaping sight plan and project which we’ll start piecemealing over the next year.”

Reed thanked the city of Warren, JAC Management, the Packard Foundation board, the Packard Park Board of Trustees and its president, Dennis Rossi, for their support.

The ceremony ended with a toast given by Fogarty to the future and the past as he told the crowd that “both are bright here in Warren.”