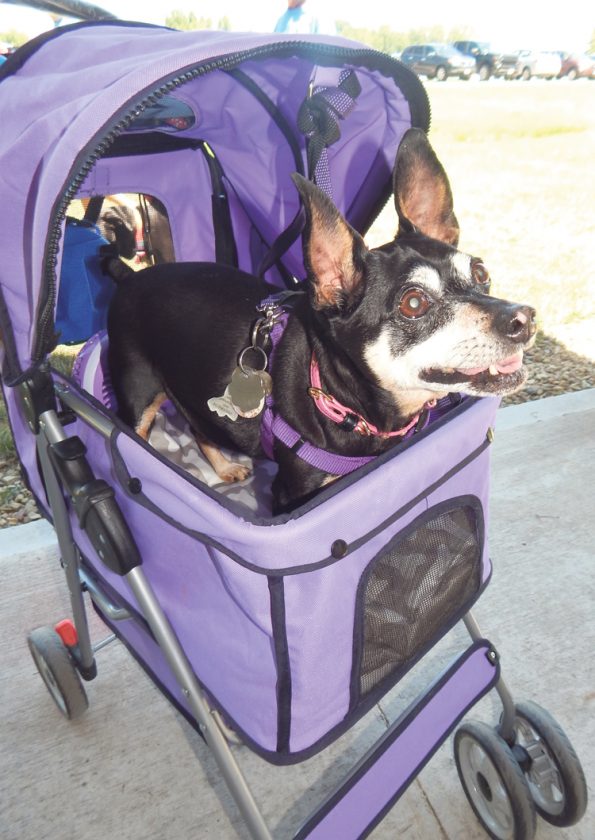 Tribune Chronicle photos / Bob Coupland Beef, a miniature Pinscher, spends time in a stroller at a celebration Sunday of the 10th anniversary of the dog park at Mosquito Lake State Park in Bazetta where dogs have been permitted for 10 years to run without leashes, play on a portion of the beach and take part in various dog-friendly activities.

BAZETTA — Ten years ago, two area men worked to get a place for dogs to run leashless, have fun and interact with other dogs at Mosquito Lake State Park.

On July 17, 2009, the effort paid off — even if neither of them lived long enough to see it — when the Mosquito Lake Dog Park opened.

The Friends of the Mosquito Lake Dog Park gathered Sunday to celebrate the 10-year anniversary with activities for dogs and dog owners and displays on the history of the dog park.

Ugo Scarnecchia of Niles, a member of the organization, said Dr. Richard Cook, a veterinarian, and Michael Gimmer, spearheaded the effort in 2006. But sadly, both died before the opening in 2009, he said.

“It’s a playground for dogs where they can run free. There is four acres on one side for bigger dogs and one acre on the other side for smaller dogs,” he said.

The group, in addition to working to keep the park looking nice, holds various events throughout the year at the dog park, including the Howl-O-Ween costume event for dogs, guest speakers and programs about dogs. And the group brings nursing home residents and special-needs children to the park to watch the dogs.

“They love to watch what the dogs do. The dogs have their own beach and love the water. There is a place where dogs can get a bath,” Scarnecchia said.

Scarnecchia said the park is open year round.

“You would be surprised how many people bring their dogs here in the winter. They don’t stay as long, but they still come here,” he said.

“The park is great because dogs get to socialize with other dogs and people. I am all for dogs being dog friendly with other dogs. Charlie likes to come here and see the other dogs,” Craner said.

Jenny Falvey, a certified canine behavior consultant with Dogsmartz Unleashed — which has opened a second location on Elm Road in Warren with a grand opening set for July 21 — was recognized by the Friends group and Mosquito Lake State Park for the many programs she holds for dog owners and dogs at the park.

“People want to understand their dogs’ behavior and what the signs and actions mean. They attend the programs to learn more about their dogs,” she said.

Warren resident Judy Schellenger, holding her Pomeranian, Ginger, said whenever she brings the dog to the park it is a fun time for both.

“She loves it and always has a good time. When I put her down and take off the leash, she takes off running. Today, she sat in the shade and relaxed,” Schellenger said, noting Ginger runs on the smaller dog side for canines weighing 15 pounds or less.

Warren resident Nick Perry brought his dog, Chloe, a husky shepherd, for the first time to the dog park.

“I usually go to the dog park in Austintown. This is a nice park too because there is a beach area where the dogs can run in the water. Chloe likes getting in the water,” he said.

The state cuts the grass at the dog park, while the Friends group does other things to keep the park nice.