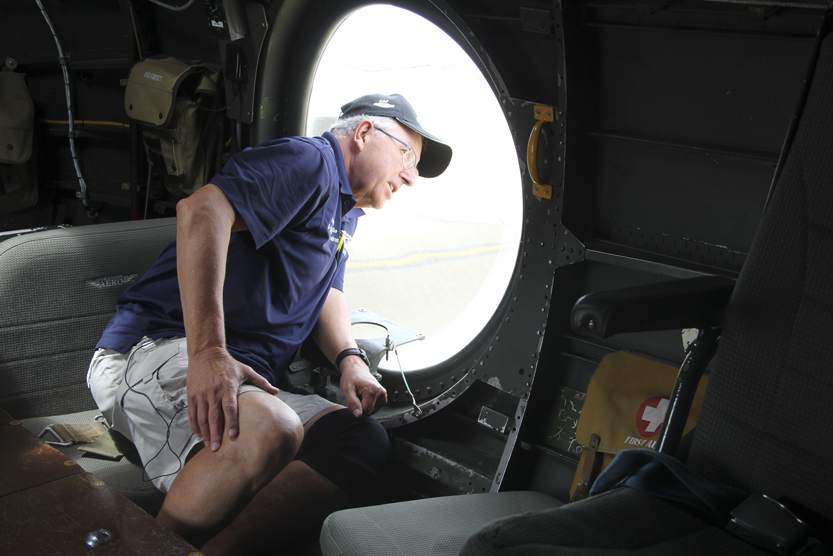 Tribune Chronicle / Allie Vugrincic Jacques Robitaille, public information officer for the Commemorative Air Force B-29 / B-24 squadron, sits in a gunner’s chair in the rear of a B-29 World War II-era bomber named “FIFI” Monday at the Youngstown-Warren Regional Airport. The plane and two other aircraft are part of the AirPower History Tour Wednesday through Sunday at the airport.

VIENNA — When World War II era B-29 bomber “FIFI” flies, she shakes, she’s loud and she smells like an engine.

But after his nearly 100 flights in the antique aircraft, Jacques Robitaille, Commemorative Air Force spokesman, also said it “never gets old.”

The B-29 will be available for the public to view and tour the cockpit 9 a.m. to 5 p.m. Wednesday through Sunday at the Youngstown-Warren Regional Airport. Two other World War II planes, a T-6 Texan and a PT-13 Stearman, will also be on display for the AirPower History Tour.

About 4,000 B-29s were manufactured in wartime efforts, said Robitaille, and of those, 1,000 were shot down in the Japanese theater. Nearly 75 years later, “FIFI” is one of two operational B-29s.

The first prototype plane was flown in 1942 and they were used through the end of the war, Robitaille said.

“They were the next generation in aircraft,” Robitaille said.

The cabin was originally pressurized and heated, and computer technology was used to assist gunners, he said.

The already-tight cockpit and rear, connected by a 34-foot-long tunnel through which crew members have to crawl on their bellies, would have been even tighter during wartime, with equipment occupying most of the free space, said Robitaille.

“They were not built for comfort; they were built to win a war,” he said.

And in a way they did, as B-29 planes were responsible for dropping atomic bombs in Hiroshima and Nagasaki.

Robitaille said veterans who flew on B-29s in the war are often nostalgic when touring “FIFI.” Until recently, a worn silver dollar sat on the navigation table — it had been a gunner’s good luck charm during the war. Robitaille said the gunner returned home without a scratch.

The B-29 in Vienna, which did not see action overseas, costs more $1 million per year to maintain and operate, Robitaille said. Most of the funds come from door fees and passenger rides that range from $600 for a seat in the rear to more than $1,000 for premiere seats in the front.

The B-29 flights are 9 and 10:30 a.m. Saturday and Sunday. The experience lasts about an hour, with a talk from the pilots, tour and about 30 minutes of flight time at about 2,000 feet. Reservations can be made online at www.air powertour.org.

Robitaille said the goal of the Commemorative Air Force is to “educate, honor and inspire.” The privately operated nonprofit based out of Fort Worth, Texas, is almost entirely volunteer-based and tours groups of its more than 800 aircraft from late spring until October.

John Moliterno, executive director of the Western Reserve Port Authority, said having the planes at the airport is a way to increase exposure.

“We’re constantly trying to continue to expose the people of the Valley to the airport,” Moliterno said.

Admission is $10 for adults, $5 for children ages 10 to 17 and free for children 9 and under. Also Saturday, a car show will be held on the lawn with proceeds going to Mathews High School and the Pittsburgh Institute of Aeronautics, which has a location at the airport.