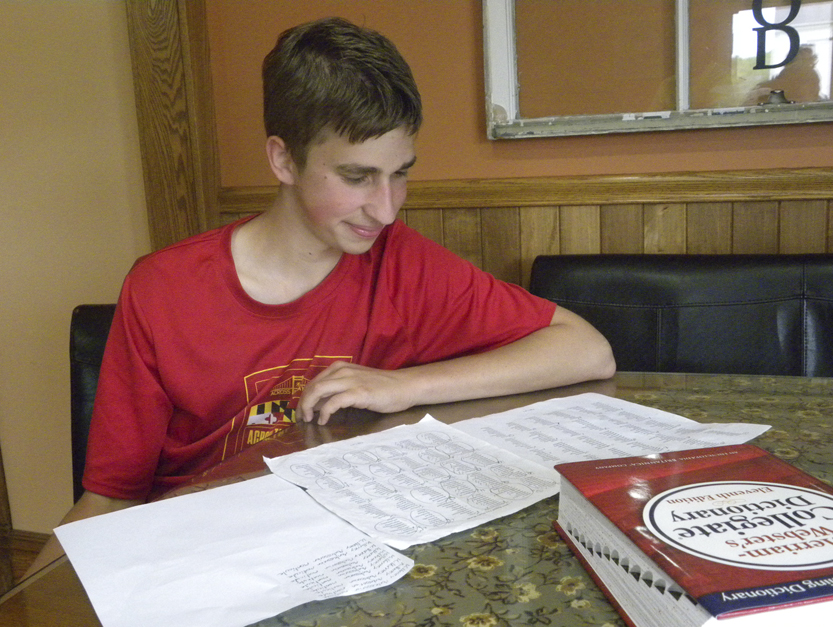 KINSMAN — After competing every year since third grade, one local boy’s spelling bee career will be coming to an end this week.

Jeremy Slywczak, 14, a student at Badger Middle School, will compete for the second and last time in the 92nd Scripps National Spelling Bee Finals in Washington, D.C. The bee starts today with a written round, and all the spellers go to the microphone at least once on Tuesday. The competition will air on ESPN starting Tuesday.

The trip also includes sightseeing and a tour of the nation’s capital.

Slywczak won the 28th annual Tribune Chronicle Scripps National Spelling Bee in March with his spelling of the word “maestro” in the 14th round. For winning the local bee, he received a one-year subscription to Merriam-Webster Unabridged online, the Samuel Louis Sugarman Award (a 2019 United States Mint Proof Set courtesy of Jay Sugarman), a one-year membership to Britannica Online Premium and a $20 gift card from the Tribune Chronicle.

He also won the local bee in 2017 and advanced to the national level. He took fourth place in the 2018 local bee.

He has been competing in spelling bees since he was in third grade — the first year students are allowed.

“I thought it was cool,” Slywczak said.

He spends two hours per day studying for the national bee.

“My mother or father, whoever’s available, we’ll work on one section of the list,” he said. “If I get any wrong, I’ll write the word ‘X’ number of times. We’ll work on another section; I’ll write those words.”

The more he misses a word, the more times he has to write it in order to remember it.

Slywczak said the etymology of words helps him to remember how they are spelled.

His mother, Jennifer Slywczak, said it’s “pretty cool” her son gets to do this, but it can also be frustrating.

“It’s not just a season really,” Jennifer said. “It’s not something you can do a week before the spelling bee and expect to be prepared. It’s just an ongoing process.”

Studying and competing in spelling bees has allowed Jeremy to increase his vocabulary and see the multitude of words that exist.

“One of the things that I’ve learned here is perseverance,” he said.

Jeremy said the first time he competed, he made it to regional and got eliminated on the first word.

“I just kept at it, and now I’m here at the nationals,” he said.