Niles jubilant in release from its state watch 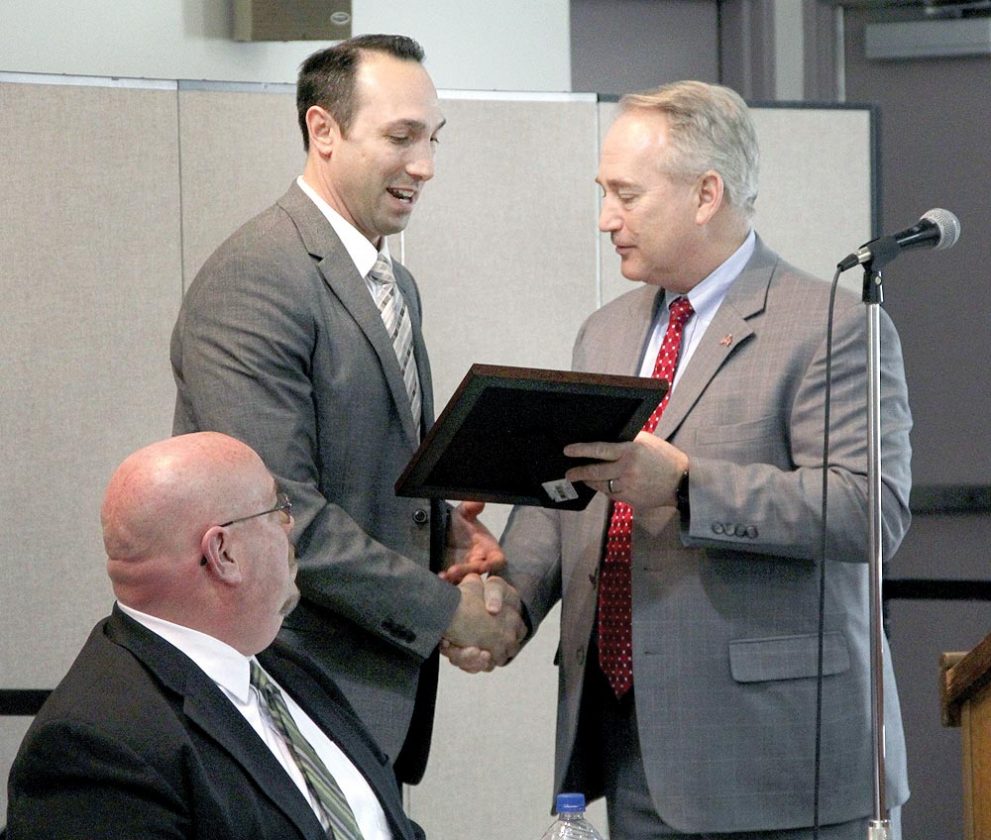 Tribune Chronicle / Allie Vugrincic Ohio Auditor of State Keith Faber, right, hands Niles Mayor Steve Mientkiewicz a plaque certifying the city no longer is in fiscal emergency. Looking on is Barry Steffey, city council president, who was among the many city leaders and residents attending the Monday afternoon ceremony.

NILES — Ohio Auditor Keith Faber on Monday released the city of Niles from fiscal emergency after what was described by state officials as a near-record turnaround from serious debt to financial stability in a span of four-and-a-half years.

“It’s truly amazing, the level of improvement,” said Faber, before he presented Mayor Steve Mientkiewicz with a plaque celebrating the city’s financial stability, during the afternoon announcement at Niles Senior Center on East State Street.

The Auditor’s Office placed the city in fiscal emergency in 2014 due to deficits in seven funds, including a $2.7 million deficit in the water fund and a $118,000 deficit in the sewer fund.

The city’s five-year forecast now projects positive balances going forward, including a $4.3 million balance in the water fund by 2023 — a $7 million turnaround.

“This was a team effort for the citizens of Niles,” said Mientkiewicz.

In an effort to restore the city to financial stability, city employees took concessions, and, in 2016, voters passed a levy to increase income tax from 1.5 percent to 2 percent. The city also cut back on health care costs by switching to a different provider, which saves $2 million annually. An automated city auditor’s office, improved monthly reconciliation program and outsourced income tax collection also will save the city money going forward.

Former Mayor Thomas Scarnecchia said when he took office in 2015, there was no money to work with. “It was total negative,” he said.

The state auditor’s office worked very closely with Niles, said Faber. “We have a level of confidence that the city will not immediately fall back into fiscal emergency,” he said.

Still, with what Mientkiewicz estimates as a $65,000 loss in property taxes with the idling of the General Motors plant in Lordstown, the city has to remain adaptable. He said Niles will “make the necessary adjustments,” going forward to remain financially stable.

“Today is not the finish line, it’s the starting line,” said City Council President Barry Steffey Jr., who was part of the now-disbanded Niles Financial Planning and Supervision Commission.

The school district, in addition to having a deficit, has nearly unintelligible financial records, he said.

The district is nearing the end of the 15-day window in which a financial planning commission must be appointed. Like the city, the district will have to meet requirements to be removed from fiscal emergency.