Shooting happened hours before victim was to appear in court 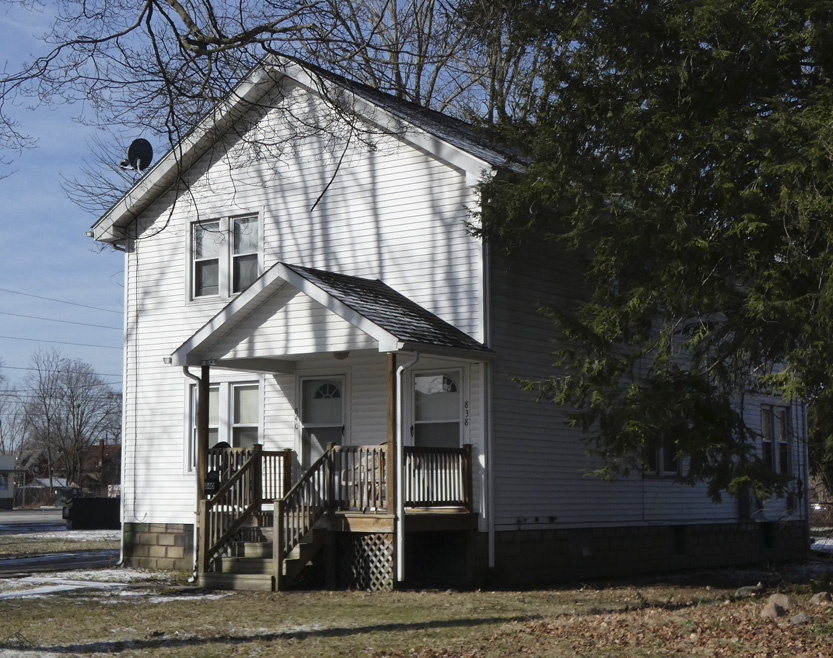 Tribune Chronicle / Raymond L. Smith Aaron Staggers, 33, of Warren, was shot to death inside this home at 840 Woodbine Ave. SE around 2 a.m. Tuesday. He was supposed to go on trial Tuesday on felony drug charges for which he was indicted in October, court records show.

WARREN — A man who was scheduled for trial Tuesday on felony drug charges was shot to death several hours before he was to appear in court.

Aaron Staggers, 33, 2227 Peace Ave., died as a result of gunfire just before 2 a.m. Tuesday at 840 Woodbine Ave. SE. He was one of two men shot inside the first floor of a white, two-family house. Staggers died at the scene, according to police reports.

Police were called to the Woodbine house by a woman who told Trumbull County 911 dispatchers, “Somebody got shot in my house.”

“He’s been shot,” the woman said. “Somebody was just shot in my house.”

A 911 dispatch report states a car drove into the driveway at 840 Woodbine and rammed into the rear of a vehicle parked in the driveway.

Staggers has an arrest record that includes charges of drug possession and drug use in 2018, as well as a charge of trafficking in marijuana in 2017, according to Warren Police Department records. In 2003 and later in 2006, Staggers was arrested by Warren police on charges of receiving stolen property, records show.

He was sentenced in March 2007 to one year in prison at the Lorain Correctional Institution after pleading guilty to a felony burglary charge, court records show.

He had a warrant filed Jan. 23, signed by Trumbull County Common Pleas Court Judge Peter Kontos, on a charge of failure to appear for a court hearing in connection to cocaine and heroin charges, for which he was indicted in October, court records show. He also was indicted on a charge of escape. A jury trial was scheduled at 9 a.m. Tuesday.

Staggers is Warren’s third homicide of 2019. Azhiek E. Bennett, 22, was shot Feb. 6 as he walked to his girlfriend’s apartment on South Feederle Drive. D’Anthony Williams, also 22, was shot during the early morning hours of Jan. 8 on West Avenue. All three homicides are still under investigation.