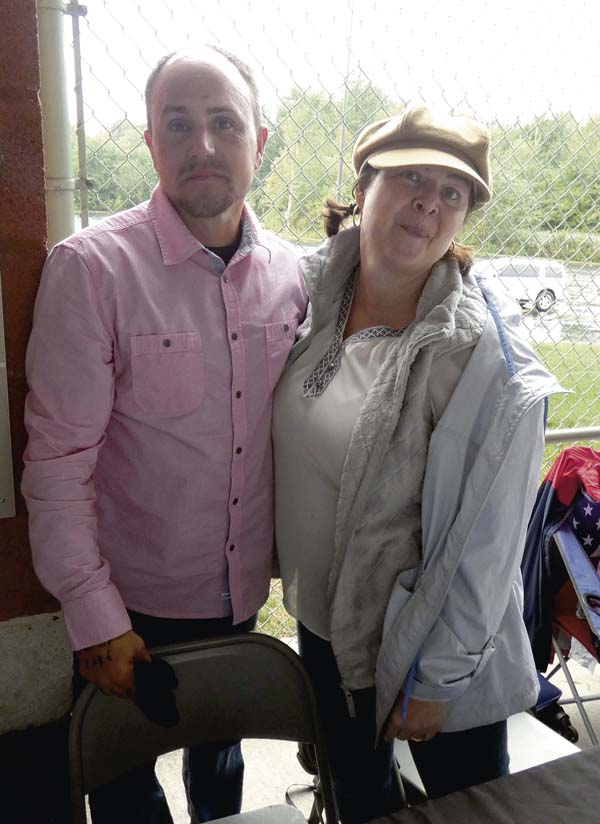 Champion resident Ron Durst and Warren resident Shelly Markovich. Durst has two and a half years sobriety and and Markovich has more than 13 years. The two ran into one another Saturday at the Alliance for Substance Abuse Prevention 6th Annual Rally for Recovery at Eastwood Field.

NILES — Although people are overdosing and dying by the thousands in communities across the nation, there are thousands of people out there in recovery who didn’t become a statistic.

More than 550 people gathered Saturday at Eastwood Field for the 6th annual Alliance for Substance Abuse Prevention Rally for Recovery. Lauren Thorp, ASAP project director for the Trumbull County Mental Health and Recovery Board, said if addiction is the negative side of things then recovery is the positive.

“We need to show the community that people do recover,” she said. “It is possible.”

Shelly Markovich, of Warren, who got sober in 2005, went from being homeless and seeking opioids to getting clean and working as a social worker for Glenbeigh. Markovich started drinking daily by the age of 14 and by 30, she was using intravenous Oxycontin and throwing cocaine and methamphetamine into the mix.

It’s not the life a self-described “farm girl from Iowa” had envisioned. Markovich said both her parents were alcoholics who died from alcoholism, which is partially why she began to drink, but she first tried opioids after getting a prescription for painkillers after falling from a horse.

“I remember thinking damn this is the answer,” she recalled. “My house could have been burning down and I would have felt OK. It took that edge right off. I was just a drunk before I took the Oxycontin.”

Markovich said Oxycontin became her drug of choice — she said it was like her mother, father, lover and God all in one — and there was nothing she wouldn’t do to get it. It led her to a life of homelessness. At one point, a friend let her stay on his couch and she gave his car to a crack dealer.

“I went to Hitchcock Center for Women in Cleveland in 2005,” she said. “God, that place saved my life.”

Markovich said recovery is a journey. It’s a chronic problem, she said, and maintaining an awareness that the problem will always exist is half the battle to staying sober. One way to do that is to stay surrounded by others in recovery.

Ron Durst of Champion, who has two-and-a-half years of sobriety, sometimes crosses paths with Markovich “in the rooms” of Alcoholics Anonymous. Their stories are similar, yet unlike Markovich, Durst said no one in his family except him has a substance abuse problem.

At 17, Durst got his first charge of underage consumption, but he said he spent the next 17 years believing he wasn’t an alcoholic. Like Markovich, Durst progressed to opioids, and it wasn’t long before he would wake up and put a pistol in his mouth.

“That was the breaking point for me,” Durst said. “I always said I would never cross the line and do crack or heroin, but toward the end those were the only things that mattered to me.”

Durst said at one point, he was homeless and living under a bridge. He said he would rob, steal and cheat his parents even though they raised him with good morals. Today, he has his family back, a job and a home.

“The hardest part for me is remembering that I have to go into this every day being willing to learn,” Durst said. “I’ve got to tell God about my shortcomings and ask him to help me out every day.”