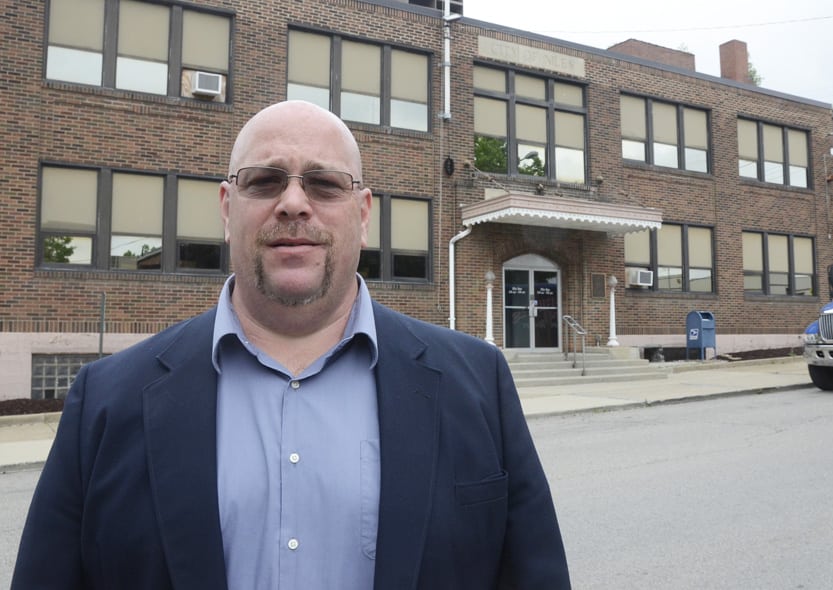 Tribune Chronicle / R. Michael Semple Niles interim mayor Barry Steffey Jr. stands outside Niles City Hall Tuesday afternoon following the resignation of Mayor Thomas Scarnecchia. Steffey, who is council president, will serve as interim mayor until a new one is appointed by the Niles Democratic Precinct Committee members. They expect someone to be in place by July 18 and the person chosen will serve the remaining 18 months of Scarnecchia's term.

Scarnecchia, 76, defeated incumbent Niles Mayor Ralph Infante, the longest-serving mayor in Niles history, in the 2015 Democratic primary. His resignation comes just weeks after Infante was sentenced to 10 years in the Lorain Correctional Institution on numerous corruption and gambling charges.

Scarnecchia didn’t return calls seeking comment Tuesday. In a letter to the city Monday, Scarnecchia cited “personal reasons” for retiring and said he wishes nothing but the best for the city.

“The residents elected me to leave this city better than when I came in office; I believe I have done that,” he wrote.

The state placed Niles in fiscal emergency in October 2014 after budgets showed a $2 million deficit in the water department and smaller deficits in several other departments. Infante, who was indicted in 2016, first came under scrutiny when the state auditor’s office began investigating another former treasury clerk, Phyllis Wilson, who pleaded guilty to theft in office, for thefts of more than $150,000 dating back to 2009.

City officials have said the city was left to crumble during the Infante administration with minimal upkeep and maintenance work performed on municipal buildings.

In a post to his website, Councilman Ryan McNaughton said Scarnecchia “ran against the machine” when he challenged Infante. Since that time, the city has worked to counter the culture of corruption and poor planning that led to fiscal emergency, McNaughton wrote.

Steffey, who said he has no intention of applying to serve the remainder of the term, said Scarnecchia felt it was time for the city to move on without him.

“I hope this process goes in a timely manner so we can continue the positive momentum we have gained through systematic changes,” Steffey said.

The Niles Democratic Precinct Committee expects to appoint someone to fill the remaining 18 months of Scarnecchia’s term by July 18, according to Trumbull County Democratic Party Chairman Dan Polivka. Applicants have until 4 p.m. July 3 to submit a letter and resume to Polivka or the Trumbull County Board of Elections, he said.

Polivka said Scarnecchia, who is a friend, has had some health issues.

WARREN — The average price for gasoline across northeast Ohio is 7 cents higher this week at $2.03 per gallon, ...

FOWLER — Township trustees on Monday approved extending through June 30 the hourly pay increases for all safety ...

On the record- Fowler